Want some journalistic intrigue? Go to “The Source”

There is some real good acting on display these days at New Jersey Repertory Company. Not only do the three cast members of “The Source,” Jack Canfora’s trippy excursion into the world of news management, toss off their snappy dialogue with wit and precision, they also appear comfortable with the inter-twined plot that might stymie lesser talents. In a scenario that swings non-sequentially among places and dates, that plot hinges on the ethics of gathering the news versus the business of disseminating it. It would seem that in Canfora’s view, ‘journalistic integrity’ is an oxymoron. (I will forgo a riposte.)

A two-year old phone-hacking issue, for which media giant International News Corporation had apologized, is back in the news via a leak by an unknown source, threatening INC’s acquisition of media giant Clear Sky. If that sounds vaguely familiar, any similarity to real Murdochs – er, persons – is intentional. 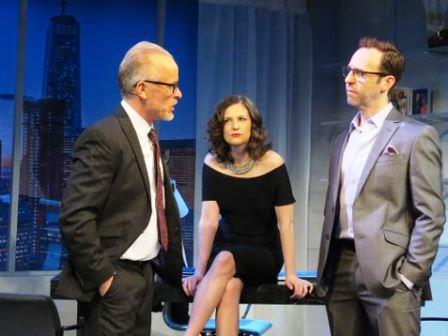 The underlying journalistic malfeasance, phone-hacking, is pretty much generic, but Canfora puts his own spin on it. Eleanor Brock (Eleanor Handley)’s high-up corporate position puts her just below mogul-in-chief Roland (Conan McCarty) and slightly above co-exec Andrew (Andrew Rein), whose relationship to Roland makes for an interesting dynamic. In the course of a meeting in Eleanor’s office high above Manhattan (Jessica Parks’ sleek set design) over how to deal with the leak, Eleanor becomes Roland’s unsuspecting scapegoat, hoist by her own petard*. The maneuver is totally implausible, but the rest of the play depends on it, so moving on…

We’re brought back two years to the London site of the original journalistic sin, then ahead a few days, still in London, and finally back to the NYC office, now Andrew’s, 15 months after the first scene, where Roland gets his comeuppance…sort of.  (Allaying our confusion, dates and locations are projected along a front border.) It could end there, but in a belated “the plot thickens” coda, the manipulation of Eleanor and Andrew’s years-ago intimacy is yet to be revealed. It’s all complex beyond necessity, but there’s no denying the intrigue at its core, which some judicious paring should enhance.

Handley leaves no doubt about Eleanor’s intelligence, competence and equal-footing status…until she is conned by a master manipulator, which inspires her to revenge. And fortunately for everyone in the building, Eleanor is going to the opera after the opening-scene meeting, because Ms. Handley does “gussied up,” as Andrew calls it, very well indeed. As her cryptic co-exec, Rein finds the balance between loyalty to her and the character’s self-interest. The Andrew-Eleanor chemistry is never far from the surface. (I can’t resist mentioning that those are also the actors’ first names. Could you?)

McCarty plays Roland as the nefarious scoundrel Canfora wrote. You can practically see his take-no-prisoners brain at work, as Roland over-compensates for his somewhat short stature. (Creative casting all ‘round.)

Canfora would be wise to keep these three actors on board. Also, who knows if another director could bind them to the play as well as does Evan Bergman, who downplays the characters’ types without negating them?

A goodly portion of the repartee is whip-smart. Having been summoned to Eleanor’s office, Andrew thinks he might be in trouble “considering all the other times you have had me in here for a drink.” “I’ve never had you in here for a drink,” she counters. “Exactly.” Other exchanges contain more than a kernel of wisdom. When Andrew questions a business prognosis, Roland asserts the prediction was made “By the smartest people in the world.” “The smartest people in the world,” retorts Andrew, “don’t make predictions.”

The final scene of “The Source” leaves a question hanging. Depending on your need for a tidy ending, this can be thought-provoking or frustrating. Someone asked me what I thought might happen with Eleanor after the events of the play. The smartest people in the world don’t make predictions, I told her. Nor shall I.

*Hamlet, Act 3, scene iv, referring to when a plot or scheme is turned against the plotter/schemer, which is what happens to Eleanor in “The Source.”