Despite an occasional misfire, tailoring some shows to a performer in a particular role can be a gimme. Dolly Levi and Mama Rose, for example, come with the territory. Lilli Vanessi does not dominate as do those. At least she didn’t until Kelli O’Hara assumed the role in Roundabout Theatre Company’s revival of “Kiss Me, Kate” at Studio 54. The luminous, assured Ms. O’Hara sings the Cole Porter score so wonderfully, and plays Sam and Bella Spewack’s book so adeptly that the show goes to soft focus when she’s not on stage.

Warren Carlyle’s choreography and the ensemble charged with executing it are outstanding, and there are some fine supporting performances, which is the key word: it’s in support of O’Hara. 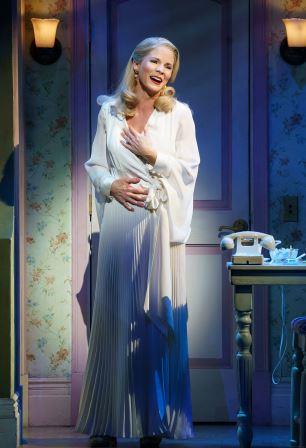 “Kiss Me, Kate” takes place backstage and on stage at Ford’s Theatre in Baltimore during a tryout of a musical version of Shakespeare’s “The Taming of the Shrew.” Actually inspired by Alfred Lunt and Lynne Fontanne’s private quarrels during a run as the embattled “Shrew” couple, the show imagines egotistical producer/actor Fred Graham (Will Chase) and his temperamental co-star and ex-wife Lilli Vanessi (O’Hara) in the dual roles. “Kate” opened on Broadway December 30, 1948, winning the very first Best Musical Tony Award (over “South Pacific”) and ran for two-and-a half years. (Previous Broadway revivals were a short-lived one in 1952 and a multi-Tony-winning one in 1999.)

Knowing Shakespeare’s source play isn’t necessary, but some familiarity wouldn’t hurt. Just as Petruchio wears down Kate, so does Fred with Lilli…at least he used to. Some of “The Taming of the Shrew” and the original “Kiss Me, Kate” content would hardly qualify for a #MeToo Movement Award. Petruchio “tames” Kate by bullying, starving and applying an over-the-knee spanking that renders her unable to travel by donkey, abuses that were excerpted into the “Kate” musical (albeit farcically, but still). Moreover, the Shakespeare ends with Katherina’s monologue extolling the virtues of women submitting their wills to men, which much pleaseth Petruchio. (“Why, there’s a wench. C’mon and kiss me, Kate!”) 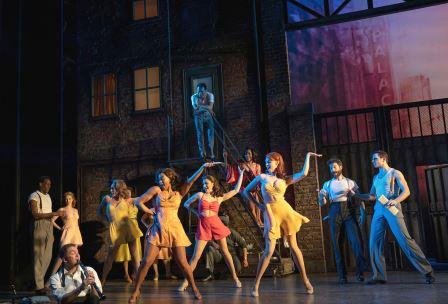 Those misogynistic particulars and the overall tone of Kate’s (and Lilli’s) subjugation have been re-interpreted and/or re-staged here, leading to considerable debate between traditionalists and pro-revisionists, among whom, as long as adjustments do not distort plot or character beyond intent, I count myself. Petruchio/Fred kicks (not spanks) Kate/Lilli’s derriere, but she reciprocates in kind, and Kate’s closing monologue, sung to Porter’s lovely tune, is now gender-neutral. Having appeared in “The Taming of the Shrew” and “Kiss Me, Kate,” twice each, I applaud Lilli/Kate’s emergence into the 21st Century. 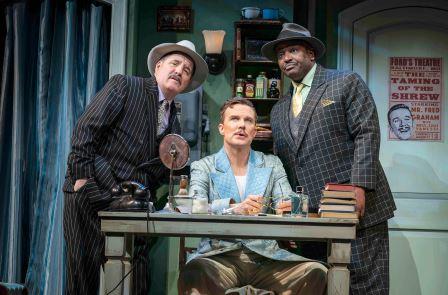 “Kiss Me, Kate” was the first Cole Porter show with musical numbers that advance the plot, none more clearly than the curtain-raiser, “Another Op’nin’, Another Show.” That adrenaline-rush sets the tone for what follows: a wealth of Cole Porter, including the gorgeous “So in Love,” some songs with lyrics lifted from Shakespeare (“Were Thine that Special Face”) and a couple backstage ditties (“Always True to You in My Fashion”).

I’m not sure if Will Chase lacks the baritone heft for Fred Graham, never mind Petruchio, or if playing opposite Kelli O’Hara makes it seem so. Either way, the pairing tilts the balance toward Lilli, and why not? It’s been Fred’s way for decades.  (The memory of Brian Stokes Mitchell in the 1999 revival does Chase no favor, either.) 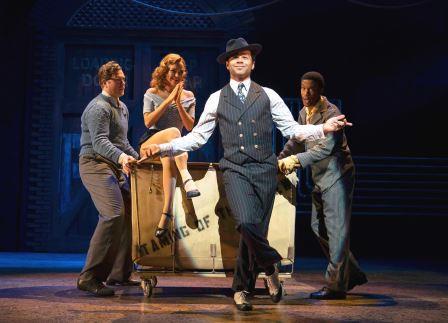 The show’s second couple is more balanced. Stephanie Styles is a perky Lois Lane (not that one), who plays Katherine’s younger sister Bianca in “Shrew,” and Corbin Bleu is winning as the resident juvenile Bill Calhoun. “Why Can’t You Behave,” Lois sweetly implores her gambler boyfriend, who later dances a nifty backstage tribute to “Bianca.” (Bleu taps his way up and then down the stairs…backwards, and on a ceiling…upside down.)

Bill Calhoun’s forged gambling IOU is the hook that brings two gangster types on scene. John Pankow and Lance Coadie Williams are formidable enough in appearance and amusing enough in their show-biz gaffes, but except for the clever lyrics, “Brush Up Your Shakespeare” doesn’t rise to its usual occasion. Then there’s Harrison Howell, come to liberate Lilli from the tawdry theater world. Originally a stuffy business mogul, the character was re-imagined in ’99 as a parody of General Douglas MacArthur, complete with aviator glasses and corncob pipe. Despite Porter’s “From This Moment On,” from the 1953 “Kate” movie and later wedged into stage productions, this is one revision that does not work for me. Terence Archie does what he can with references to President Truman and the line “Guns don’t kill people,” but it’s like the scene is from some other play. (Besides, this Lilli does not need a medal-chested savior.)

Too Darn Hot II (How do they do that?)

The “Too Darn Hot” ensemble number that opens the second act is a joy, despite its incongruity. I mean if it’s too darn hot to make love, this perpetual-motion chorus line would need mass resuscitation. Fortunately, they can catch their breaths during the prolonged cheering that greets its ending. Among other pleasures, count the staging of “We Open in Venice,” which becomes more amusing with each repetition. Designer David Rockwell’s multi-level backstage set is one on which you could even wait for the girls upstairs, and Jeff Mahshie’s costumes, in and out of Shakespeare, are smashing. Scott Ellis’s sweeping direction rounds it all out splendidly, while music director/conductor Paul Gemignani and orchestrator Larry Hochman make the Cole Porter score soar.

Which brings us back to Ms. O’Hara, whose range, between the upper register of “So in Love” and the lower of “I Hate Men,” astonishes. (Simply stating “I hate men” instead of drawing out the first three notes is a neat touch.) As Kate finally stands with Petruchio, so Lilli of course does with Fred; it is, after all, a love story. The difference is that here it is those women’s considered choices. And never has a show’s final image said so much about its leading role: As Lilli and Fred exit upstage, she holds the door for him to leave and then turns for a lingering look at the backstage area – and at us – as the light fades on her luminous face. 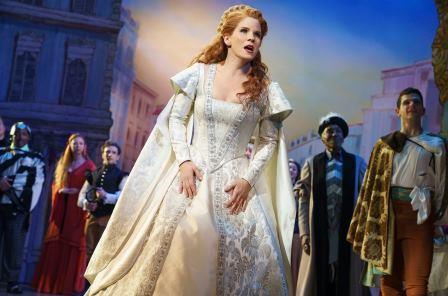 Petruchio’s description of Katharina, while playful, applies to Kelli O’Hara in full measure. She is beautiful, witty and affable, he has heard, among other “wondrous qualities,” and he has arrived “to make mine eye the witness of that report.” You might consider doing the same.