Criticizing a play for being too wordy might seem counter-intuitive. Character dialogue, after all, is words. But unlike narrative stories or essays, plays need to balance telling with showing. Martin Moran’s “Theo,” world-premiering at Two River Theater Company, relies mostly on telling, with what showing there is serving to point up the imbalance. If good intentions were enough, “Theo” would be a masterpiece.  As it is, with a boatload of good intentions crammed into one dysfunctional-family drama, the result is diffuse and, at nearly three hours (including intermission), overlong. 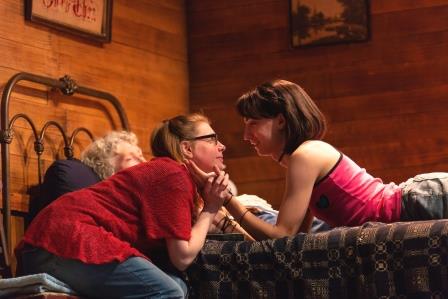 Set in a small Catskills Mountain Community in 2007, the adult son Theodore (Zachary Booth) and daughter Elizabeth (Andrea Syglowski) of the dying Flynn-family matriarch Margaret (Brenda Wehle) are gathered in their childhood home, ostensibly to comfort Margaret and witness her passing. Theo has traveled from Oregon; Elizabeth and her teen-aged offspring Maddy (Jesse James Keitel) are local. Hospice nurse Abraham (Jon-Michael Reese) manages Margaret’s care with tenderness, albeit with hang-ups of his own. What unfolds among them in Moran’s agenda-driven play is a litany of issues that test their (and our) tolerance and acceptance of one another and, indeed, of their own histories and values.

‘Agenda-driven’ is not necessarily a knock. Moran is on the right (or, in another context, left) side of his social, sexual and familial topics, but trying to deal with them all in one stage play is burdensome. Among the topics are homosexuality (out and repressed), gender fluidity, sex abuse (by a Catholic priest, no less), financial concerns, a suicide long denied, and some racial matters (nurse Abe is black). In multiple loosely constructed scenes, they are overstated or repeated, as if we didn’t get it the first time.

In sync with the playwright, Carolyn Cantor’s direction minimizes action in favor of intense, close discussion, which in turn renders sizeable portions inaudible. And except for one who commands the space, the characters tend to disappear into designer Antje Ellermann’s handsome set that looms massively in Two River’s smaller Marion Huber Theater. Several upstairs bedroom scenes are not even visible from the far audience-left seats.

To the actors’ (and director’s) credit, the Flynn folks are a believable family. Syglowski and Booth seem like siblings. She is particularly effective as the conflicted woman sandwiched between parental concern for a difficult teen-ager and emotional ambivalence toward her mother. (“I hate her; I love her.”) Booth embodies the title character’s brooding persona. A suggestion that his abuse at age 16 might have been consensual is off-putting, and if Theo’s graphic recitation about having witnessed Maddy’s birth serves a valid purpose, it eludes me. The actor gets through it eventually. His overall take on Theo is appropriately moody.  Abe’s gradually-revealed history with the Flynn family informs Reese’s sensitive performance – and impacts the play’s very last scene. 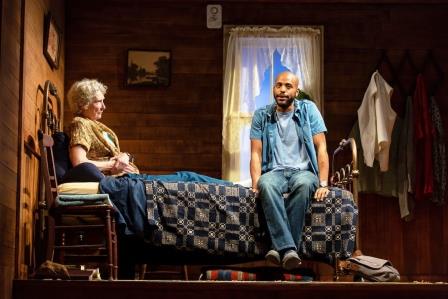 Ms. Wehle plays Margaret’s physical condition very well in scenes that, while repetitive, depict her decline. Her final scene is disturbingly realistic. Wehle also has a veteran actor’s skillful way with the play’s welcome bits of humor that emerge in Margaret’s wry observations. Theo’s suggestion that “Meditation is good for your health, Ma” is countered with “Health and me have parted ways,” and on discovering that cremation is subject to sales tax, “It’s like getting burned twice.” 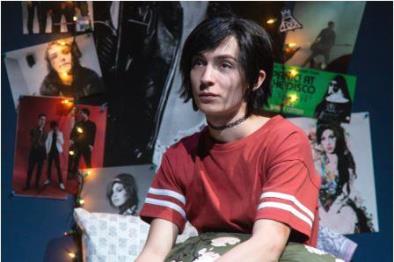 Referred to early as Matthew, Elizabeth’s teen-ager, presumed male at birth and now transitioning to female, prefers Madeline. Maddy, as the nick-name evolves, is played by Jesse James Keitel, who is identified in the program as “a non-binary actor and performance artist” (with a plural pronoun).  So, respecting both actor and character: Their performance as Maddy is terrific; they play her beautifully. Over the course of several months (Margaret’s initial  prognosis), Maddy becomes more and more confident in her identity, until, still a tad awkward in her girly outfit, she has won everyone over – including, most important, the audience. (Kristin Isola’s costume guidance delineates the transition perfectly.)  Keitel’s is a fine portrayal; they show more than they tell.

I was told the play had already been shortened before the opening night, which at least bespeaks playwright Moran’s willingness to let go some of his words. He might do well to condense extended riffs on Maddy’s little-boy origins, Margaret’s trim at Hair We Are, peanut brittle with macadamia nuts, and other time fillers. He might also consider re-titling it “Maddy.”