Something funny happened to “The Play That Goes Wrong” on the way from Broadway to off-Broadway. Fear not; everything that was funny during its nearly two-year run in the 922-seat Lyceum Theatre is just as funny at the 360-seat New World Stages, where it re-opened this week. The difference, though, is a subtle pickup in how the audience relates to the characters. For me – and I sensed it throughout the house – it became personal, akin to cheering-on a perpetually losing team. But a ton more fun.

“The Play That Goes Wrong” cast and crew in their class(y) photo. {Pics: Jeremy Daniel]

The characters you mock-suffer with are those in the cast of “The Murder at Haversham Manor,” the play being performed by the fictional Cornley University Drama Society. A similarity to “Noises Off” is noted, but while that farce is about rehearsing and performing the play-within-the-play (“Nothing On”), “Haversham” is the interior play you’ve ostensibly come to see. A devilishly clever “Haversham” playbill features cast photos and bios as well as all the tech credits, which reveal that the director also acts in the play and serves ten other functions, including managing the box office. (That’s the faux director, of course. The original Broadway director Mark Bell’s brilliant concoction has been faithfully re-staged for New World Stages by Matt DiCarlo.)

Same group at work in “The Murder At Haversham Manor”

The “Haversham” performance goes wrong at every turn. Its screw-ups are relentless, building one upon the other in a cascade of hilarity. To be sure, if you have ever appeared in a play or produced, directed or stage-managed one, something that goes wrong here has gone wrong for you. Just not everything, and certainly not all in the course of one performance.

A product of Britain’s (actual) Mischief Theatre, “The Play That Goes Wrong” was co-written by Henry Lewis, Jonathan Sayer and Henry Shields, all of whom appeared in its all-Brit Broadway cast. The new cast is American, save one, and I am pleased to report that all eight (plus stagehands who pop in and out) are as adept at the comedic turns of phrase and physical antics as were their forebears. It remains a master class in comic invention and execution, and in these more intimate quarters, there’s a ‘regular guy’ element to the proceedings that closes the gap between actor and audience. The cast’s split-second timing of the intricate goings-on is astounding; that they all survive the physical aspects is miraculous. 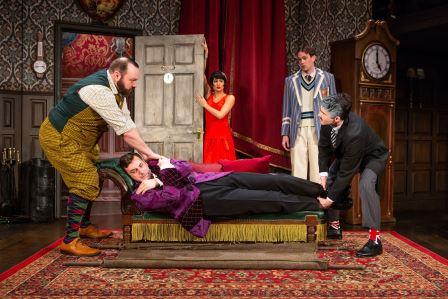 What do you do with a body in the parlor?

One character botches his entrance twice before earning spontaneous applause when he finally gets it right. Another character is played by three different actors in three different styles, all hilarious. For verbal dexterity, there’s a scene with inverted back-and-forth dialogue, with the answers preceding the questions. It is funny enough on its own, more so as the inverted exchange becomes a risqué scenario. And one wildly inventive bit of business has the recipient of a phone call unable to reach the phone (please do not ask why), so the others form a hand-to-hand chain from the receiver with the familiar finger-phone symbol at the end. The bit inspires another of the several mid-play applause breaks. 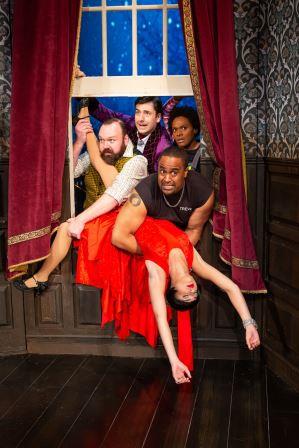 Certainly not the way Sandra (Ashley Reyes) expected to exit her scene!

Describing what happens to designer Nigel Hooks’s Tony and Drama Desk Award-winning British-Manor set, especially in the manic second act, would be a spoiler. Just know that nothing stays where it’s supposed to, assuming it was even correctly placed at the start. Also, singling out any of the accomplished farceurs would be to short-change the others. The actor who can’t resist grinning at the audience; the vamp whose run-in with the scenery knocks her (and her replacements) out cold; the restless corpse; the Inspector of Police who might not be what he seems: they and the others mesh into one of the smoothest-operating comic ensembles you’ll ever see on or, as now, off-Broadway.