Along Roll We Merrily

I am a charter member of the Spoilers Avoidance Association, but it is impossible to write about “Merrily We Roll Along” without revealing – to those not already aware – that the 1981 Stephen Sondheim (music and Lyrics) and George Furth (book) show runs in reverse; each of its scenes predates the previous one, regressing from 1980 to 1957.  So noted, suggesting that the original ran only sixteen performances (after 52 contentious previews) because it was ahead of its time is either profoundly ironic or just a lame wisecrack. Whichever, the musical examines the myth of the American Dream by tracing the lives of its central characters in a dozen annotated scenes (1976, ’73, etc.) from middle-age to youth. The Fiasco Theatre staging, at Roundabout’s Laura Pels Theatre, compresses it into one 110-minute act. But for some of the songs, it seemed longer.

Over the years, “Merrily” has achieved cult status, due to its form and Sondheim’s inventive score and, it can be argued, in spite of Furth’s clichéd book, which is nearly superfluous. The story centers on Hollywood producer Franklin Shepard (Ben Steinfeld), whose success comes at the expense of personal and professional betrayal of close friends Mary Flynn (Jessie Austrian) and Charley Kringas (Manu Narayan), who shared early show-biz struggles with Frank as a bonded threesome. By the end (the play’s beginning), Mary has gone from having “a little wine with dinner to the reverse,” and Charley from Frank’s close collaborator to a cast-off. 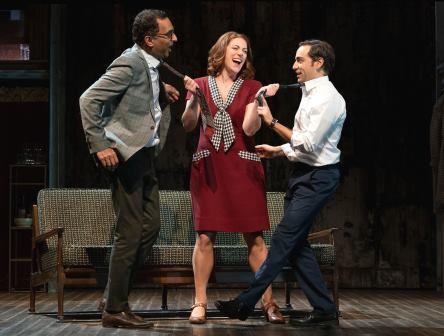 Sondheim’s lyrics, set to his uniquely memorable tunes, tell the story on their own. Consider just the titles: “Rich and Happy” in the first scene (celebrating Franklin’s latest screen triumph), followed back in time through “Like It Was” and “Old Friends,” among others, culminating with the idealistic “Our Time,” sung as the three glimpse flashes of the orbiting Sputnik 1 from their NYC rooftop in October, 1957.

Those three performers and three others comprise the entire cast, a compression (from 20 in my last “Merrily”) that better served Fiasco’s 2015 reduction of Sondheim’s “Into the Woods.” That show’s eleven singer/actor/musicians nailed both score and character; this one’s half-dozen illuminate neither. Even directed by the same Noah Brody (and with four holdover cast members), the piece is in soft focus. The scene- set years are announced, but it takes a few minutes in each to sort out the corresponding stages of the relationships.

[In fairness, the form presents actors with a daunting challenge (see note below).]

The singing is pleasant enough, but only that; and while Lorin Latarra’s choreography is periodically peppy, these are not dancers. Paloma Young and Ashley Rose Horton’s costumes do not sharpen the images: the men’s are curiously unkempt; the women’s, mostly plain-to-drab. 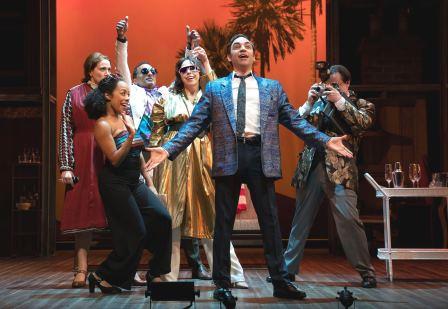 The “Merrily We Roll Along” cast

What survives the indifferent production is the Sondheim score, thanks to Music Director/Orchestrator Alexander Gemignani’s new arrangements for conductor Emily Whitaker’s sterling eight-piece Band. (That Playbill credit, rather than Orchestra, is nifty.) The syncopated “Old Friends” sticks in the brain long after, as does the melodic “Not a Day Goes By.” Both those songs, by the way, are reprised in the show – before they are introduced later in the play, which is earlier in time. The ‘style’ of the reprises, how they are sung, even by whom, reflects the characters’ knowledge and experience since the youthful versions, which come later in the play.

The reverse-order of “Merrily We Roll Along” is a unique theatrical construction. That alone – and the rarely-revived Sondheim score – make this mediocre production worth a look-see.

[In an essay by the director of a 2002 Shaw Festival production, she noted that in rehearsing this play, “the director and actors find themselves asking ‘wait a minute, do we know this yet?’ because they have already played the scene that has resulted from this action. The actors must play the scene ‘innocently,’ as they must not know what has happened in the scene they have just played!”]