“Ain’t Misbehavin'” at Westchester: The Joint Is Jumpin’

To describe a play or musical as ‘dated’ might indicate that the piece is no longer relevant by virtue of evolved social or moral standards. (You won’t see Neil Simon’s play about the battered alcoholic Gingerbread Lady any time soon.) But the term can also denote a positive, as in evoking an era worth re-visiting despite – or even because of – some outmoded characteristics. So it is with “Ain’t Misbehavin’,” sub-titled “The Fats Waller Musical Show,” enjoying a spirited revival at Westchester Broadway Theatre (a dinner-and-show venue, with a varied menu of entrees included in the ticket prices).

While it was not the first ‘jukebox’ musical, “Ain’t Misbehavin’” was the first major successful one, opening off-Broadway in 1978 and soon moving to Broadway, where it won three Tony Awards, including Best Musical. The show quickly spawned two other catalog musicals: “Eubie,” which spotlighted the works of Eubie Blake, and “Sophisticated Ladies,” which did the same for Duke Ellington. (“Smokey Joe’s Café,” “Five Guys Named Moe” and, arguably, such as “Mamma Mia” and “Jersey Boys” also owe a debt to Fats.) 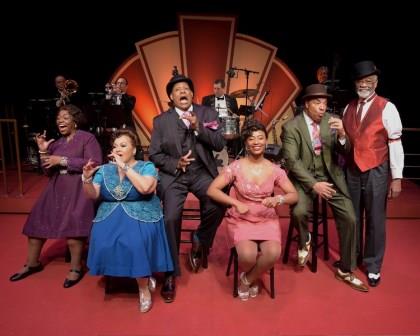 Even without a spoken line, save one, “Ain’t Misbehavin’” provides insight into the life and times of Thomas “Fats” Waller. Born in 1904 and dead too soon in 1943, his dream of becoming a ‘serious’ composer (like George Gershwin, whom he much admired) was derailed by racial barriers. Falling back on his comic persona and swinging style, he left instead a legacy of jazz and blues that profoundly influenced Count Basie, Teddy Wilson, Dave Brubeck and others. In retrospect, Fats did indeed compose serious music.

A compilation of his melodies (Fats wrote the music; various collaborators, the lyrics) and some others’ songs that he memorably recorded, the revue is set in a Harlem nightclub in the 1930s, illustrated by the costuming, the arrangements and the presentation. If there is a hint of minstrelsy, it is in the service of that time and place; performed here unabashedly, it is history – not academic, mind you, but a replication, as entertaining as it is authentic.

Five top-notch talents (and a nifty back-up band) bring new life to old songs, some of which might be familiar even to relatively younger folks, “I’ve Got a Feelin’ I’m Falling” and “Two Sleepy People” for two. The show segues seamlessly from song to song, including less familiar tunes that are well worth discovering. The tightly harmonized ensemble numbers are terrific. The title song kicks off the show with a blast, and “The Joint is Jumpin’” ends the first act on a high. “Spreadin’ Rhythm Around” does just that, and “The Jitterbug Waltz” is stuck in my head a week later.

Each performer also has solo turns. M. Martine Allard’s emotional “Mean To Me” and Ron Lucas’s seductive “The Viper’s Drag,” (“The Reefer Song”) resonate. Tony Perry’s take on “Your Feet’s Too Big” is a comic gem, and his and Lucas’s “The Ladies Who Sing with the Band” is an apt tribute. Amy Jo Philips’s “Squeeze Me” is an offer you want to accept, and Anita Welch makes you believe that she’s “Keepin’ Out of Mischief Now” (or maybe not). All these and more (about 30 total) are accompanied by music director William Foster McDaniel at the piano, fronting the five piece band as a latter-day Fats Waller.

“Ain’t Misbehavin’” includes a musical statement that puts the show in perspective. Fats Waller wrote “(What did I do to be so) Black and Blue” in 1929 with Andy Razaf, his most prolific lyricist. The blues song is a treatise on bias, both white racism and that directed toward African-Americans with varying skin tones. Sung a capella in multi-part harmony, it is hauntingly beautiful.

Celebrating the show’s fortieth anniversary year, Westchester has snagged its creator and original director, Richard Maltby, Jr., who also contributed some lyrics (with co-creator Murray Horwitz), to helm this milestone production, and a smooth one it is.

The music of Fats Waller’s era isn’t mainstream anymore. Outside of this show, you’d be hard put to find “Honeysuckle Rose,” which Fats composed, or “It’s a Sin to Tell a Lie,” which he recorded, featured in any popular medium. But fans of traditional jazz and blues – as well as newbies to the forms – are encouraged to embrace this “Ain’t Misbehavin’” memory trip. In the words of Fats himself, “One never knows, do one?”

Through Feb 24 at Westchester Broadway Theatre in Elmsford NY. Performances are Wed thru Sun evenings with some luncheon matinees as well. For schedule and tickets ($59-$89 include menu choices, with show-only available): www.broadwaytheatre.com