A blazing performance as Nina Simone in “Little Girl Blue”

My memories of seeing Nina Simone perform in Philadelphia and Atlantic City jazz clubs in the late 1950s/early 60s are soft-focus, because, well, do the math. What does remain sharp, though, is how her singing affected those of us fortunate enough to be her fans and catch her appearances. Her upbeat, syncopated stylings were infectious, and her soul-searching blues laments were spiritual, in every sense. Her self-accompanied “I Loves You, Porgy,” sung hunched down over the keyboard as if singing only for herself, was exquisite.

My memory of Laiona Michelle portraying Nina Simone in “Little Girl Blue: The Nina Simone Musical” is much sharper, not just because it was last week at George Street Playhouse, but because Ms. Michelle’s evocation of the iconic vocalist, musician and activist is an amazing piece of work. A creation, to be sure, but equally important, a re-creation of the life, times and persona of Ms. Simone. Not only does she virtually disappear into her subject, but except for the songs, Nina’s own and a dozen others, Michelle also wrote the emotionally stirring show. (Among those other composers are Judy Collins, Randy Newman, Jacques Brel and Rodgers & Hart. That Ms. Michelle sings them so well is thrilling. That she seamlessly integrates them into her show, along with themes by Johann Sebastian Bach, is near genius.) 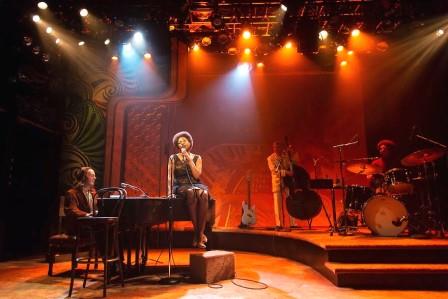 The show takes place in the years between 1968 and 1976, with flashbacks to Simone’s childhood, her early career and her involvement with the American Civil Rights Movement that roiled the ‘60s. In two trim hour- long acts, we learn of Nina’s religious upbringing, her early piano lessons, a husband who goes from supportive to abusive, and her evolving from a club entertainer to an artistic symbol of resistance to racial and other injustices.  Along the way, Ms. Michelle channels the voices of the very young Nina, her parents, the strict piano teacher and the husband. She also does a brief, uncanny impression of Martin Luther King, Jr., whose murder in 1968 left Simone devastated and spurred her activism. “An artist’s duty,” she says, “is to reflect the times,” as valid an assessment now as it was in 1968.

The necessarily compressed overview touches on Simone’s legal problems (She withheld income taxes as a Vietnam War protest) and her self-imposed exile to France, Switzerland and the Bahamas. Ms. Michelle’s focus is on Simone as an entertainer and how those factors actually enriched her work.

Expansively directed by Devanand Janki, Michelle is constrained only to the extent that Simone might have been, and when she is not, the excitement spills over into the auditorium. A distinct advantage of George Street’s temporary home on a Rutgers campus (while the PAC in New Brunswick is under construction) is its intimacy. Laiona’s face reflects everything going on inside her – and inside Nina. You cannot take your eyes off hers. 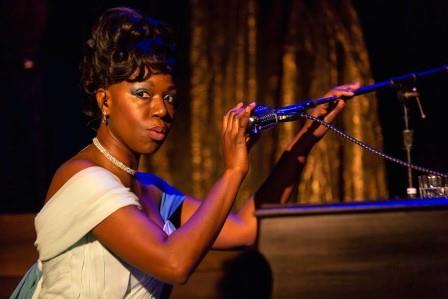 On designer Shoko Kambara’s clean-lines set that features a gorgeous themed-mosaic backdrop, Ms. Michelle is accompanied by musical director/arranger/writer Mark Fifer on keyboards, Saadi Zain on bass (upright of course) and percussionist Kenneth Salters. “Press the right key at the right time and the music plays itself,” Nina was taught. If that is so, it is remarkable how consistently these four select the right key to press. As for the right time to experience it, that would be before Laiona Michelle’s brilliant “Little Girl Blue: The Nina Simone Musical” ends its George Street run. (Although it wouldn’t surprise me if you got another chance soon enough in NYC.)

Through Feb 24 at George Street Playhouse’s temporary home at 103 College Farm Road, off Rte.1 in New Brunswick NJ. For directions and tickets ($25-$89): online at www.GeorgeStreetPlayhouse.org or call the box office at 732-246-7717

Nina Simone (See what I mean?)