Take Someone to “The Prom” (Formal Wear Optional)

A couple kissing in front of Macy’s in Herald Square is hardly newsworthy, but one at last year’s Thanksgiving Day Parade actually marked a milestone in live TV – and was also a spoiler for a Broadway musical. Televised by NBC, “It’s Time to Dance,” the finalé number from “The Prom,” ended with two young women sharing a loving kiss.

So now you know how “The Prom” resolves. But any audience member who doubts that Indiana high schoolers Emma (Caitlin Kinnunen) and Alyssa (Isabelle McCalla) will end up together, are as heartless as the PTA folks who cancelled the prom because Emma wanted to bring Alyssa as her date. If that sounds like a serious topic, it is. But woven into the fabric of “The Prom,” it is the raison d’etre for the most upbeat, romantic and downright funny Broadway Musical in years. 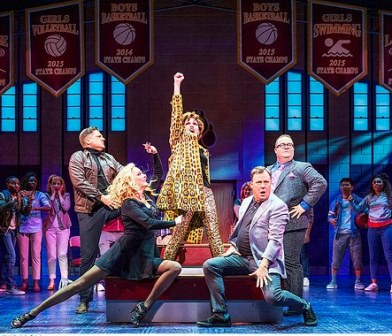 Cancelling the prom does not sit well with a group of Broadway actors whose own show, an Eleanor Roosevelt musical, closes on opening night after a scathing (and hilarious) review in the New York Times. Looking for a project to improve their image (Habitat for Humanity doesn’t make the cut), they spy a news item about the cancelled prom and head to Indiana to right that wrong. Their song “Changing Lives” spells out their mission. “We’re Liberal Democrats from Broadway,” they announce, disrupting a meeting in the school gym. (That line is met with applause, as is one about abolishing the Electoral College. Liberal is as Liberal does.)

The book, by Bob Martin (“Drowsy Chaperone”) and Chad Beguelin (“Disney’s Aladdin”), who also wrote the lyrics, proceeds along two tracks that function individually even as they complement each other. The Broadway track, we’ll call it, is rich with show-biz references (Sondheim takes a hit) and more than a hint – okay, a blast – of camp, while the Indiana track is heartfelt, with a relevant object lesson at its core.

When you are not laughing at the one ‘track,’ you are welling up with empathy for the other, and their eventual merger – in captivating story, scrumptious song and exhilarating dance – is a collaborative triumph among the aforementioned authors, with composer Matthew Sklar and choreographer/director Casey Nicholaw.

The cast is nigh flawless. If the Broadway characters are stereotypes, it is intentional, as is the tradition of giving each principal their own ‘eleven o’clock number.’ As the Broadway diva, the perfectly cast Beth Leavel stops the show with “The Lady’s Improving,” sung to the sympathetic high school principal (Michael Potts, steady and strong).

The peerless Brooks Ashmanskas is the flagrantly gay actor whose profoundly sensitive soul is revealed in just a few deceptively offhand comments. His numbers are old school and great fun. Angie Schworer is the quintessential chorus ‘girl,’ aging a bit (if not to my eye), with legs that go on forever as she inspires Emma with a demonstration of “Zazz,” a la Bob Fosse. (The song-and-dance duet portion with Emma is a gem.) 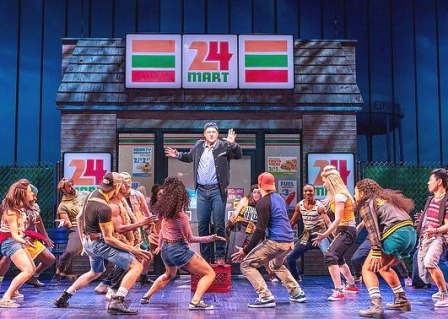 Christopher Sieber inspiring the ensemble to “Love Thy Neighbor”

Christopher Sieber plays Trent Oliver, whose “Godspell” tour has been cancelled, leaving the stage-weary veteran of four Jesus roles free to start a Theater Arts class in the high school. If his inspirational, rousing “Love Thy Neighbor” is any indication, he’ll be turning out budding superstars.

And while we’re talkin’ superstars, consider Ms. Kinnunen. Her Emma is the most endearing young woman in this symbolically stigmatized Indiana town – and, in fact, anywhere else where acceptance of diversity is in short supply. Emma tempers her anxiety with intelligence and wit (“Memo to self: Don’t be gay in Indiana”), and her song “(I Just Wanna) Dance with You,” sung to (and later with) Alyssa, is beyond lovely.

The youthful ensemble gets a workout from Nicholaw’s spirited choreography. The Indiana teens may have their hang-ups about sexual orientation, but they sure can dance. That closing number, “It’s Time to Dance,” and the smooch you hoped for (and knew would happen), send you out of the theater on a very special Broadway Musical high. Don’t wait until someone else asks her/him/they/hir/zim. Get yourself a date and go to “The Prom.”

Note: When I saw the show last November 17, an understudy was in for Beth Leavel, who had become indisposed at half hour. With very limited rehearsal (the show had opened just two days prior), Kate Marilley turned in the best understudy performance I’ve ever seen, earning enthusiastic applause, including from her fellow cast members. Watching it again last week with the original cast intact, I was reminded that there is a reason Broadway stars are, well, Broadway stars. Beth Leavel is a marvelous performer.