At one point in E. M. Lewis’s “Apple Season” at New Jersey Repertory Company in Long Branch, one of the play’s several contemporaneous ‘Rolling Premiere’ productions, Lissie’s former would-be boyfriend Billy (it’s been twenty years) says of her taciturn brother Roger, “Anything there was to know about him, you had to piece together.”  Another time, he tells her “You are the most confusing two people I ever met,” and while Roger had been mentioned just prior, Billy’s plural could apply just to Lissie.

The nature of the relationships among the three “Apple Season” characters isn’t always clear. Neither are the twenty-years-ago details of events that shaped those relationships both then and two decades later. That might seem like a knock on the play, but it is not. On the contrary, that’s just how some people are, deep and private, and how some memories are, faded or repressed, and capturing those human elements in a one-act play is an admirable accomplishment.

It is the present day in rural Oregon, soon after Lissie and Roger Fogerty’s father’s funeral. She is picking apples in the family orchard, before returning to her fourth-grade teaching job in another town. Roger has already left to resume his nomadic hired-hand farming vocation, and Billy, who, at 36, lives on a neighboring farm with his parents (“again, not still”), where he tends to his Alzheimer’s-afflicted mother, has come to sound out Lissie about buying the Fogerty property. And, we gradually learn, to renew contact and unburden himself of a secret that has festered over the years. 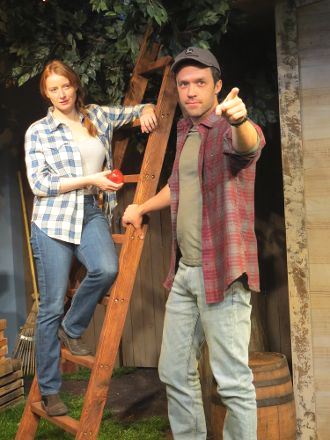 As they banter and flirt, we learn of the Fogerty family’s turbulent past, following the mother’s early death, and we begin to understand why the mental and emotional upheaval has never abated. Flashbacks, enacted live and before a rear-projection screen, fill in some gaps, but most of what we learn is through the characters’ behavior, their attitude toward one another and the sub-text of their conversation.

Which brings us to the performances, which are, in a word, outstanding. Kersti Bryan reveals more of Lissie’s psyche than the woman herself wants known, which is, after all, the point of the play (and, it could be said, of acting). The three-woman collaboration among playwright Lewis, director Zoya Kachadurian and actor Bryan is as smooth as it is knowing. Christopher M. Smith is a charming Billy. Awkward in Lissie’s presence, he’s nonetheless honest and emotionally available. The two achieve the essential chemistry between Lissie and Billy over a bottle of real AppleJack (if you know, you know), aided by some light-hearted innuendo. Lissie, for example, has plenty of apples, but “I haven’t got any cherries.” Ms. Bryan also coaxes sexiness out of “You can tell a lot about a man by his Swiss Army knife.”

Roger is a strange fellow, bedeviled by life-long anger and resentment he’d had to stifle for years. Richard Kent Green plays him just that way, with an undercurrent of vulnerability that softens his seeming hostility. 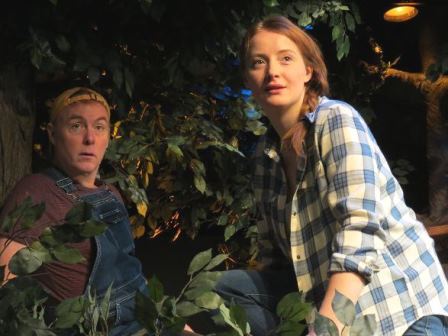 A few plot elements strain credulity. Lissie’s (unseen) Aunt Sally’s apparent passivity in the face of an unusual situation is glossed over; how Lissie’s financial needs, including college, are met is unrealistic (not nefarious, but would be a spoiler), and the idea that the experienced and reasonably worldly teacher had never been out of the state of Oregon seems a stretch.

At 85 minutes, “Apple Season” is certainly not overlong, but tightening some of its exchanges would enhance its pace. As it stands, however, it is an incisive slice of life, staged and especially acted in an impressive less-is-more naturalism. Accepting the rationality of Lissie’s final act requires major suspension of disbelief, but by then Ms. Bryan and the Misters Smith and Kent Green have made it seem plausible.