A walk on the farce side: “Noises Off” at Two River Theater

One can imagine the Two River Theater staff meeting to select a catch-phrase for their “Noises Off” advertising campaign. It is fitting that they settled on “One of the funniest plays ever written,” because, well, honesty is the best policy. If they were plugging “Nothing On” instead, they might have substituted ‘clumsiest’ for ‘funniest’ in the blurb and still maintained their integrity.

“Nothing On” is the play being rehearsed and performed within Michael Frayn’s supremely comical “Noises Off” by a troupe of inept actors who manage to mangle the farce-within-the-farce at every step. Two River’s cast is anything but inept; their bungling of the third-rate inner play is a rib-tickling delight, a master-class in comic timing.

(Frayn’s mock “Nothing On” playbill is tucked way back in Two River’s own booklet. When you attend, dig it out; it is a devilishly clever parody.)

The first act of “Noises Off” is the final rehearsal of “Nothing On,” during which everything that could go wrong does go wrong. Doors that should open do not (and vice versa); cues are missed; lines are dropped; and plates of sardines are never where they should be. (Sardines? Really? Just go with it.) Entrances and exits through the seven doors on designer Charlie Corcoran’s brilliant double-decker set are accomplished (or not) in rat-a-tat precision. The confusion is so well written and performed that we can follow it even when the on-stage characters cannot. 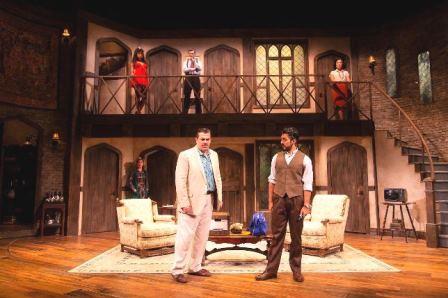 A characteristic of farce is that early scenes establish situations and relationships that play out later in often outlandish fashion. So it is that the deceptively sloppy first act of “Noises Off” begets a second act for the ages: a one-month-later performance of “Nothing On,” witnessed from backstage. Seeing the myriad entrances and exits (I lost count at 25) from behind is even funnier, considering the choreographed mayhem among the backstage characters, much of it silent while the play is on behind them. (The set change, delayed until the audience is re-seated after intermission, is a triumph of design and engineering.)

The third act is on the closing night of the “Nothing On” tour, by which time jealousies and personal vendettas have reduced that play to a shambles. Witnessing the disarray again from the front is somewhat redundant, but it ends before exhaustion sets in – hopefully on both sides of the footlights.

The stellar nine-member cast functions as one, each feeding and being fed by the others. As the actress who plays the housekeeper of the country home where “Nothing On” is set, Ellen Harvey makes those sardines her virtual co-star. She turns the mishandling of props – phones, newspapers and such – into an art form.

Kathleen Choe is terrific as the gossip-addicted, scene-hogging leading lady; Jason O’Connell is her equal as the leading man who reacts to crises with a nosebleed (and whose pants get stuck around his ankles). As the young actor whose would-be helpful observations end in mid-air, Michael Crane takes a staircase tumble that’s gasp- (and applause-) worthy.

Gopal Divan plays the harried director who is having affairs with the assistant stage manager (a perfectly frazzled Kimiye Corwin) as well as with the company ingénue, who sticks to the script no matter what and who, in the person of the alluring Adrianna Mitchell, spends most of the play in a frilly red nightie. (She adds sweats for an unscripted yoga break, which, performed on the lip of the stage, distracts from the play.) 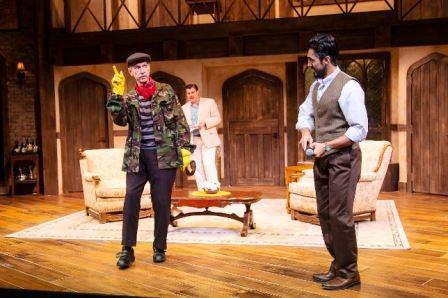 The casting of Philip Goodwin as the veteran character actor whose relationship with stage directions is tenuous (he prefers a bottle), is inspired. A veteran himself of two previous Two River productions (notably, both Dukes in “As You Like It”), Goodwin is the quintessential Selsdon Mowbray. The in-play stage manager, fix-it guy and understudy is played gamely (and well) by Phillip Taratula, which leads into a shout-out to Jane Pole, Two River’s actual Production Stage Manager, charged with keeping both “Nothing On” and “Noises Off” on track: no easy job, considering the plethora of maneuvers and devices that factor in over the frenetic two-and-a-half-hours. 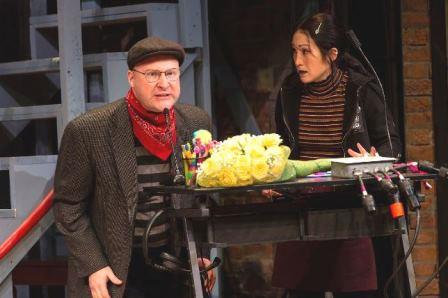 The harried “Nothing On” stage Managers: Tim (Phillip Taratula) and Poppy (Kimiye Corwin)

Based on the flow of this play, director Sarna Lapine’s bio might have included Traffic Cop. She could have trusted the sublime gag about a Richard III actor, and there’s that extraneous yoga, but most important, she and Movement Coordinator Lorenzo Pisoni have successfully extracted order from chaos…or, wait, maybe I got that backwards.

The flippant admonition for actors to just learn their lines and not bump into the furniture is turned on its head. “Noises Off” requires that the actors know their lines, of course, but also that they do bump into the furniture. And the walls. And the props. Even into one another, and all precisely on cue. This is much more difficult than it looks. Tragedy might not be easy, as the acting cliché avers, but comedy really is hard. This “Noises Off” pulls it off. It hits its marks and gets its laughs.