“ART” is in the eye of the beholder…

The term ‘bromance,’ referring to a close, non-sexual relationship between men, had not been coined when French playwright Yasmina Reza wrote “ART” in 1994, but a bromance fuels her play, which concludes its mini-run at Holmdel Theatre Company on December 16.

A fifteen-year friendship is sorely tested by the purchase of a white-on-white painting…for 200,000 francs*. Serge (Brian Craig) cherishes his monochromatic canvas – an Antrios, he boasts – which his friend Marc (Gabe Gatti) labels, almost too bluntly to simply state, “white shit.” A third friend, Yvan (Ankit Sharma) vacillates between praising Serge’s artistic instincts and agreeing with Marc’s scatological assessment. The three men and the inanimate Antrios comprise the cast of “ART.” 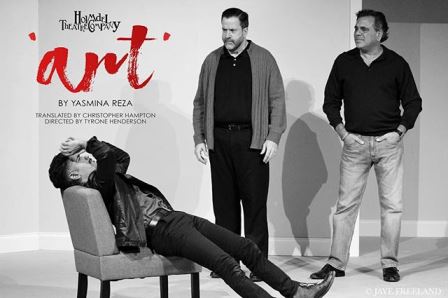 Beginning as relatively harmless bantering, the Serge-Marc discussion escalates into biting sarcasm, verbal hostility and even a brief physical altercation as the two dredge up grievances and resentments that had festered, unspoken, for years. Yvan attempts to mediate, an effort that succeeds only when the other two unite in attacking him.

Ostensibly about reactions to the painting, Ms. Reza’s insightful ninety-minute play, translated into smooth-flowing English by Christopher Hampton, is a three-way character study. Serge is a would-be dilettante who is swayed by the trendy artist’s reputation; Marc is overly self-confident and given to sarcasm; and Yvan, stuck in a dead-end job and facing a cheerless marriage, is emotionally needy. The three are inter-dependent, as even sparring comrades can be. 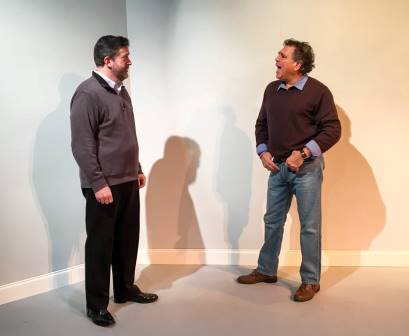 Holmdel’s “ART” moves at brisk pace, but the full effect of its back-and-forth about art and relationships requires a lighter touch than is exhibited here. Put another way, while it certainly does not bore, it’s not as funny as it could/should be. Marc’s commentary on Serge and his Antrios progresses from witty sarcasm into outright hostility and anger within the first few minutes. Gatti plays the anger convincingly, but peaking so soon, the actor has little room for character development.

Yvan’s effort to keep the peace between the other two is based on his own need for the bond to hold. The three-man unit is his safe place, his only diversion from the frustrations that he contains until they burst from him in a 1300-word melt-down. Sharma is fidgety through it (and elsewhere), which distracts some, but the memorization is a feat unto itself, and he zips through it confidently. 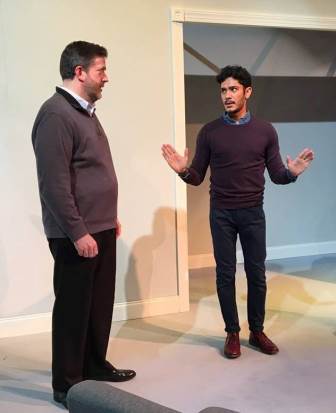 Serge remains deceptively calm until his own grievances emerge, at which point Craig finds a balance between the man’s defensiveness and his anger. (Long-smoldering Serge’s derision of a supercilious habit of Marc’s girlfriend is brilliant writing.)

Joyce Horan’s serviceable set is “stripped down and neutral as possible,” as the playwright decreed, and we get the sense of whose apartment we are in by the presence or absence of the Antrios. Chris Szczerbienski’s lighting keeps focus where it should be, and Heather Thompson’s creative poster art (pun noted) deserves a mention.

Director Tyrone Henderson moves the play along efficiently, but mining its humor seems to have been a low priority. As amusing as it is at the most obvious points, one wishes the subtle humor were equally so. 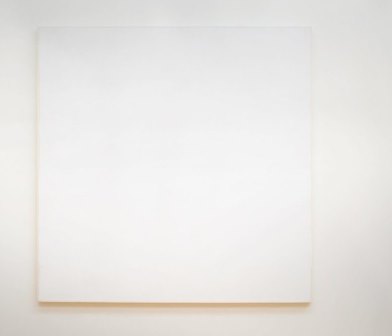 A brief epilogue reveals that the survival of the three-way friendship has hinged on an untruth told by Serge. Considering that the painting is but a prop in a play about mutual tolerance and consideration, the deception that preserves the bromance is just a white lie.