Adventures in the Santa trade…

[Some of what follows was originally posted a few years ago. This holiday season, I invite new readers and returnees to share the memories.]

Like many a New York actor back in the day, I drove a cab, tended bar…the usual. Decembers meant playing Santa Claus at corporate and home parties. The most rewarding Santa gigs, however, were not for pay.

After Robert F. Kennedy was elected to the United States Senate from New York in 1964, he announced that in memory of his brother, the President who had been slain the previous year, he would host Christmas parties for New York City school children. I phoned his office to volunteer as Santa. Several days later they called me back to accept my offer. (I learned later that they had vetted me with the FBI, the NYPD and Actors Equity.)

The first event was at a school in Manhattan. (Succeeding parties were in the other boroughs.) Arriving at the appointed hour, I was met by a stern fellow with a squiggly ear wire who rifled through my suitcase before directing me to the faculty lounge. “The other acts are already there,” he said.

Sammy sat on my lap and gave me his Christmas wish for success in his Broadway musical “Golden Boy.” (It ran over a year.)  Soupy asked for a network TV show. (Couldn’t help him there.) Then we did our act: a dance contest. Soupy did his ‘mouse’ shuffle, Sammy tapped up a storm, and I managed an awkward twist (it was ’64, after all). Just as my pillow slipped they let Santa win.

Then it was RFK’s turn.  His wish was for the youngsters to stay in school and graduate. “I want these boys and girls to grow up,” he said, “to teach in this school and design and build new schools where their children will become educated and prosper.” There was passion in his voice.

Soupy and Sammy and I repeated our act in other schools over the next several days, and RFK gave essentially the same message to a few thousand other kids. What I remember most is the power he had over the young audiences. Here he was ‘lecturing’ them in a sense – and there wasn’t a peep. Ah well…an epilogue is unnecessary. Bobby Kennedy sat on my lap and told those kids straight. He never would have conned them.

In 1981 started playing jolly St. Nick at parties hosted by Dave Winfield. The Yankees right-field slugger had established the David M. Winfield Foundation in Fort Lee NJ and would be distributing toys and turkeys to less-privileged New Jersey families. (I had met Dave when my son and I drove him from a Baltimore hotel to Memorial Stadium after he missed the team bus to a game, but that’s another story.)

Over the following five years we hosted thousands of folks at the Hackensack Hospital family center, a social club in Fort Lee, and an Armory in the Bronx. People lined up around city blocks – not just to pick up food and gifts, but to shake the hand of a generous future Baseball Hall of Famer.

On New Year’s Eve, 1999, 35 years after the RFK parties, Soupy was booked into the Count Basie Theatre for two shows as part of Red Bank, NJ’s “First Night” festivities. I planned on greeting him between shows.

Then-Mayor Ed McKenna introduced Soupy, who shuffled his way hesitantly to the microphone and began a rambling monologue, only about half intelligible. Worse, the half you could understand was mostly coarse, suggestive jokes from a half-remembered Catskills routine – hardly suitable material.

Alarmed, I hustled backstage, where Soupy’s wife Trudy was explaining to the irate Stage Manager that Soupy was having a reaction to medication he’d taken earlier in the day.  I asked the Stage Manager to let me try to steer Soupy back to some appropriate material. “You got two minutes,” he said, and I walked on.

Aware that he was bombing, Soupy welcomed on-stage company. I led him into a career-highlight discussion, including his throwing pies in faces, Frank Sinatra’s among them. We finished with Soupy’s signature Mouse dance and exited to less than thunderous applause from the diehard fans.

“No second show,” the SM decreed. What if the second show could be different? I offered.  More organized…and clean. He relented, and Soupy, Trudy and I retired to his dressing room to patch together a routine in 20 minutes. 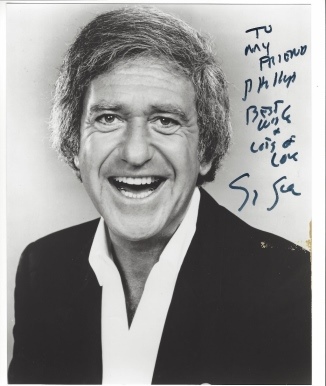 We re-created some of Soupy’s routines, including asking kids to send him their parents’ “green paper with presidents’ pictures,” which had earned Soupy a 30-day TV suspension. We did White Fang and Pooky sketches (if you know, you know), recycled some Henny Youngman one-liners, and segued into Soupy answering questions from the audience. Then everyone sang The Mouse:

Hey, do the mouse, yeah; Hey, do it all around your house, yeah;

Don’t be afraid that you can’t do it; there is really nothing to it.
Just follow me and I’ll get you through it; Have no fear when Soupy’s here.

Offstage, Trudy gave a hug and whisked Soupy into the waiting car. I was left wishing I’d had a pie to take in the face but it was too late. Soupy died in 2009 at age 73.

“Marathon ’33” opened on Broadway on December 22, 1963. Produced by Actors Studio and written and directed by June Havoc (with input from Lee Strasberg), the play was about Ms. Havoc’s survival in a Depression-era dance marathon after she escaped her Baby June persona (cue “Gypsy” first act curtain). Julie Harris earned one of her ten Best Actress Tony Award nominations in the role of June.

Despite John Chapman’s NY Daily News rave (“I urge you to see this show…Julie Harris’s finest performance to date”), “Marathon ‘33” ran only 48 performances. (Fellow cast member Doris Roberts opined years later that the realistic play had been decades ahead of its time, but that’s also another story.)

I appeared in the original company as one of a trio of shady characters who were extorting the marathon management.

On December 23 I suggested to stage manager Martin Fried that I could surprise Ms. Harris during her solo curtain call the next night, Christmas Eve, with a visit from Santa.

Marty told me he’d think it over and to bring in the suit. The next day he gave it the nod. “Julie’s a good sport,” he said. “I’m sure she’ll be okay with it.” After the performance, I quick-changed and entered just as Julie’s applause was dying down. She looked up, startled, as the applause ramped back up.

I sat on a chair that had appeared from somewhere and Julie perched on my lap. After some banter, during which she avowed that she had been a good girl all year, we exited into the wings. “What a delightful surprise,” she said. “Thank you, dear.”

A few days later, Marty overheard me telling the story to someone. He beckoned me to the side. “You really think I’d let you surprise the Premiere Actress of the American Stage during her curtain call?” He chuckled. “It could cost me my job…and surely yours.” He had run the idea by Julie, who had agreed after determining who it would be. (You’d get that in if it were your story.) She had also, Marty told me, suggested that the chair be placed on stage.

What a pleasure it was to learn, when we talked backstage at “The Belle of Amherst” years later in Newark, that she remembered the incident and I was able to reciprocate with “Thank you, dear.”