There is so much about the The Public Works Shakespeare in the Park’s musical adaptation of “Twelfth Night” to praise, it’s hard to know where to begin. Kwame Kwei-Armah and Shaina Taub’s conception honors Shakespeare’s tone and language even as it updates them with devilish dexterity, and Taub’s music and lyrics are as jaunty as is the play itself. The spot-on cast is clearly having fun with the innovations without poking fun, and the inclusion of 50 residents in each of two rotating casts, representing every borough, is a fitting tribute to Public founder Joseph Papp’s vision. (Years ago, a few days after I got out of the Army, Joe hired me to tech on “Midsummer Night’s Dream” and “Richard II” in the park, then at Wollman Rink…my first NYC theater job.) 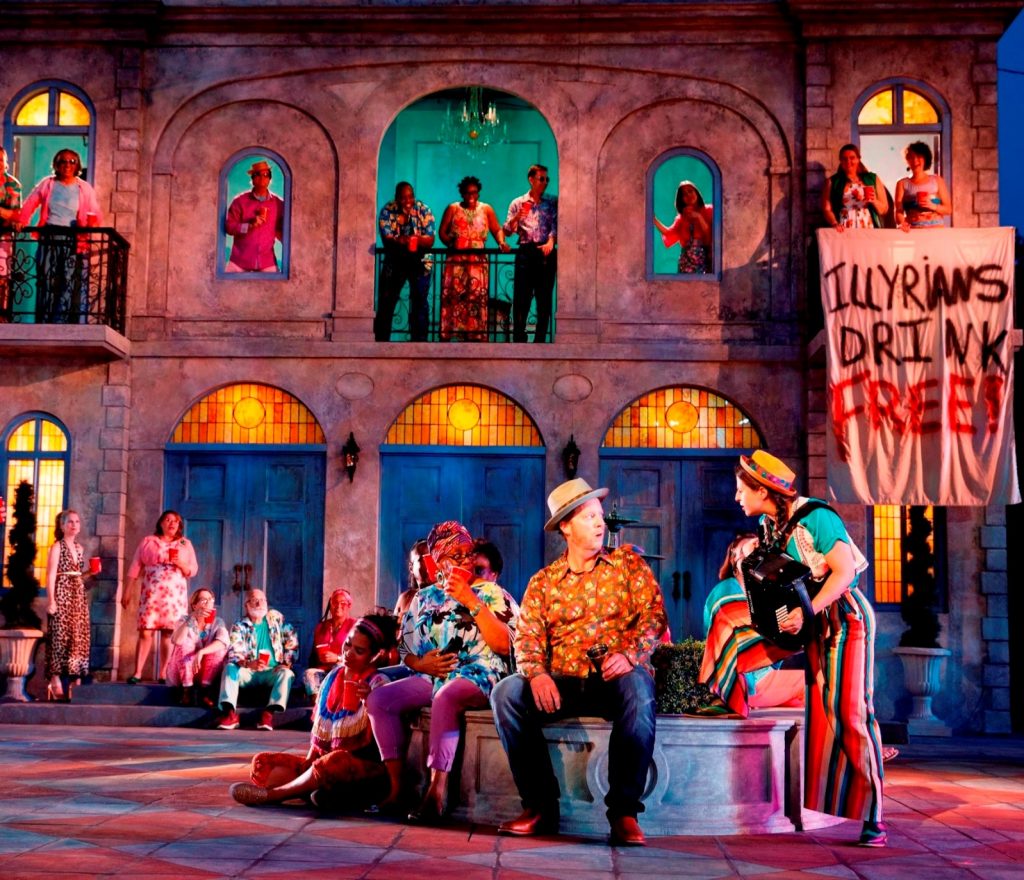 Pared down to 95 minutes, this “Twelfth Night,” buoyantly directed by Mr. Kwei-Armah and the Public’s artistic director Oskar Eustis, still captures its comedy (especially the low) and a goodly portion of its romance. Singling out anyone seems unfair to everyone else, but Shuler Hensley is a Sir Toby Belch to contend with. More fit than some we’ve seen, this Toby’s agility complements the non-stop pace. His and Maria’s (Lori Brown-Niang) plot to puncture Malvolio’s (a perfect Andrew Kober) vanity leads to a spiffy song-and-dance routine with that huge cast executing Lorin Latarro’s throw-back choreography like experienced Broadway gypsies.  As if composing the piece weren’t enough brilliance, Ms. Taub also serves as music director, co-band leader (with orchestrator Mike Brun) and, oh yes, she plays the clown Feste – with an accordion, no less. What a treat she is to behold!

The Playbill lists two understudies, one man and one woman, Kim Blanck, who covers Olivia, Maria, Feste even, and the leading role of Viola, which she played at our performance. Imagine being up on all those lines and cues…and at least 100 entrance-exits. Ms. Blanck was not only letter-perfect and, to my eyes, always right-place, right-time, her love-struck Viola/Cesario had all the requisite charm, timing and humor the role demands. Good work, Kim. 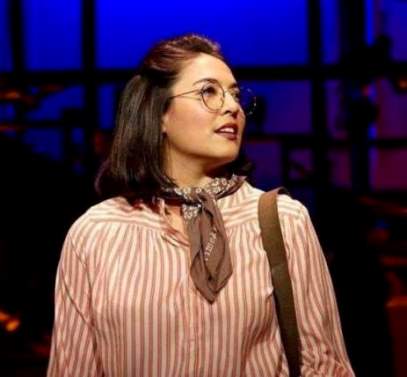 Kim Blanck in civvies (with her permission)

One needn’t know the original plot, nor will we re-cap it here except to say it is a symphony (here, literally) of mistaken-identity twindom, and some of the up-date riffs on Shakespeare are beauts, including my new favorite: during the climactic recognition scene, Sebastian puzzles over his twin Viola’s “masculine usurp’d attire” and he breaks the iambs. “Why are you dressed like me?” he asks. Well, wouldn’t you?

Through August 19 at the Delacorte Theater in Central Park. Performances Tues-Sun at 8PM. Same-day free-admission tickets are distributed in the Park. For timing and other information: www.publictheater.org

A visit to The Shaw Festival in Niagara-on-the-Lake, Ontario, yielded two gems: a heretofore unknown (to me) one-act comedy by Shaw, and a wonderful production of the musical “Grand Hotel.”

“How He Lied to Her Husband” is the front end of a double-bill of Shaw one-acts. The second play, “The Man of Destiny,” an imagined encounter between Napoleon Bonaparte and a Strange Lady, is amusing enough, but “How He Lied” steals the show. The deceptive trifle, about a married woman, her lover and her husband who has found amorous poems written to the wife by the lover, is a supremely witty farce. Constructed like an elongated joke, there’s a setup scene between the woman and her lover (funny in itself), another with the two men (ditto) and a third scene that leads to a perfect punchline. 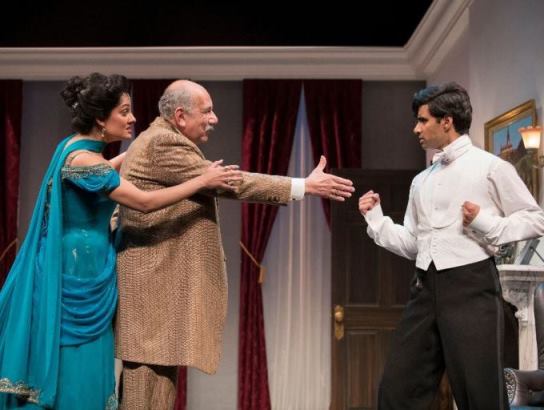 The woman’s name, Aurora, becomes part of the deception, and her contemplation of Shaw’s “Candida” is the quintessential inside gag. The lover’s ability to spin one assumption into another on the spot is Shavian word-play at its best. Paced at a goodly clip by director Philip Akin and acted to pinpoint perfection by Krystal Kiran (She), Shawn Ahmed (Her Lover) and David Adams (Her Husband), “How He Lied to Her Husband” is very funny. (You’ve heard that Shaw is long-winded? Ha! This beauty comes in at forty delicious minutes.)

“Grand Hotel” is a brilliant adaptation of Vicki Baum’s same-name novel, which was also the basis for the 1932 Garbo/Barrymore movie. Originally conceived by director-choreographer Tommy Tune, and written by a virtual committee, the musical interweaves stories of the staff and guests of Berlin’s Grand Hotel in 1928 in such a way that they inter-connect by the end.

Among them are a penniless Baron-cum cat burglar who falls in love with the aging ballerina whom he intended to rob; an industrialist who succumbs to financial chicanery; a young typist who dreams of a Hollywood career; and Otto, a fatally-ill accountant splurging on grandness. (“Life went by me while I wasn’t looking.”) Directed by Eda Holmes, their stories mesh fluidly through dramatic exchanges and gorgeous music. As the gripping plotlines intertwine, “Grand Hotel” becomes a veritable panorama, highlighted by choreographer Parker Esse’s thrilling dance creations: flowing ballroom couples, a sinuous bolero, a kinetic, cocktail-infused Charleston and the engaging “Who Couldn’t Dance With You?,” that lingered in my head for days. 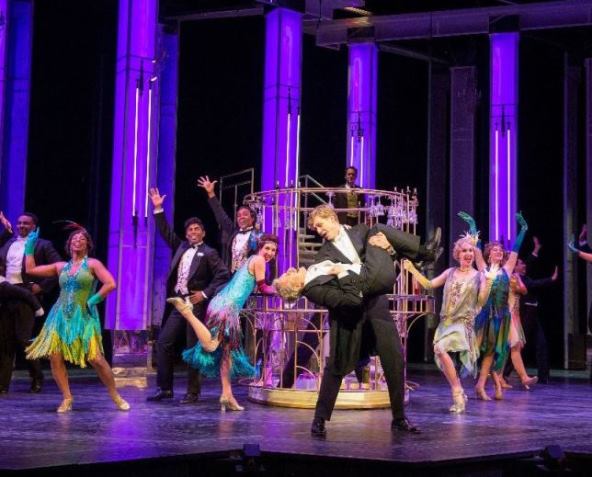 Cocktail-hour revelry at the Grand Hotel

The show is quasi-operatic, in that the musical numbers advance the relationships and the plot(s). There are no better triple-threat performers than the singer/dancer/actors I’ve seen in The Shaw’s musicals over the years. Vanessa Sears and Michael Therriault, for example, each wonderful as the poignant typist and sickly Otto, respectively, played vastly different roles to perfection in last year’s “Me and My Girl.” Their range is representative of the entire large cast of “Grand Hotel.” And of the grand Shaw Festival as a whole.

The Shaw runs through October 28 and includes Shaw’s “O’Flaherty V.C.,” Sir Arthur Conan Doyle’s “Hound of the Baskervilles,” the musical “Oh What a Lovely War,” Shakespeare’s “Henry V,” an adaptation of C. S. Lewis’s “The Magician’s Nephew” and more. For schedule and other info: 800-511-SHAW or online at www.shawfest.com