The Stratford Festival: Shakespeare and More

Theater-goers who venture to Stratford, Ontario for the Shakespeare might want to check out the “supporting” plays and musicals as well. While both “The Tempest” and “The Comedy of Errors” bear witness to Stratford’s commitment to the Bard, several other plays, written and set in the 20th Century, are also worthy.

“The Tempest,” Shakespeare’s last solo-written play, is enhanced by magical stage effects, and “Comedy of Errors,” Shakespeare’s first-written comedy, is as knockabout funny as it should be. Both are marked by creative casting. 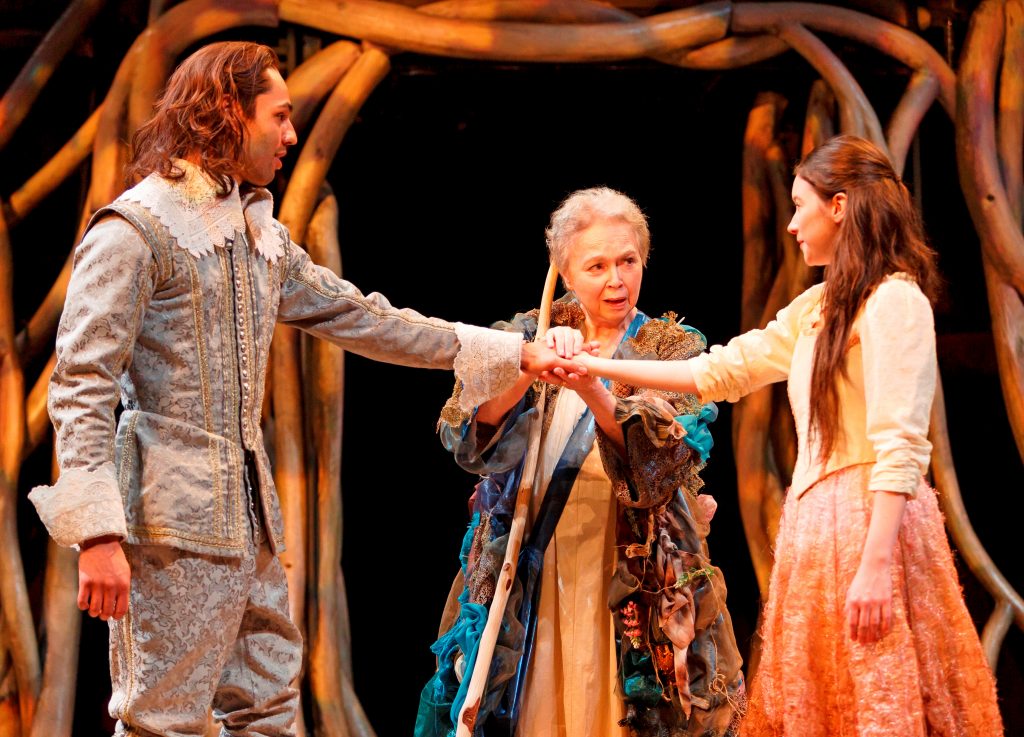 In “The Tempest,” legendary Canadian actress Martha Henry is Prospero, a male role often lately transposed to female. The former “Duchess” of Milan was marooned with her young daughter Miranda after being cast adrift in a coup by Prospero’s own brother. Twelve years later, Prospero, possessed of magical powers, creates the title storm that in turn strands her brother and his party on their island. The ensuing byplay involves the seafarers coping with their predicament and with Prospero’s indigenous, lizard-like slave Caliban. (“What have we here? a man or a fish?” asks an incredulous sailor.) 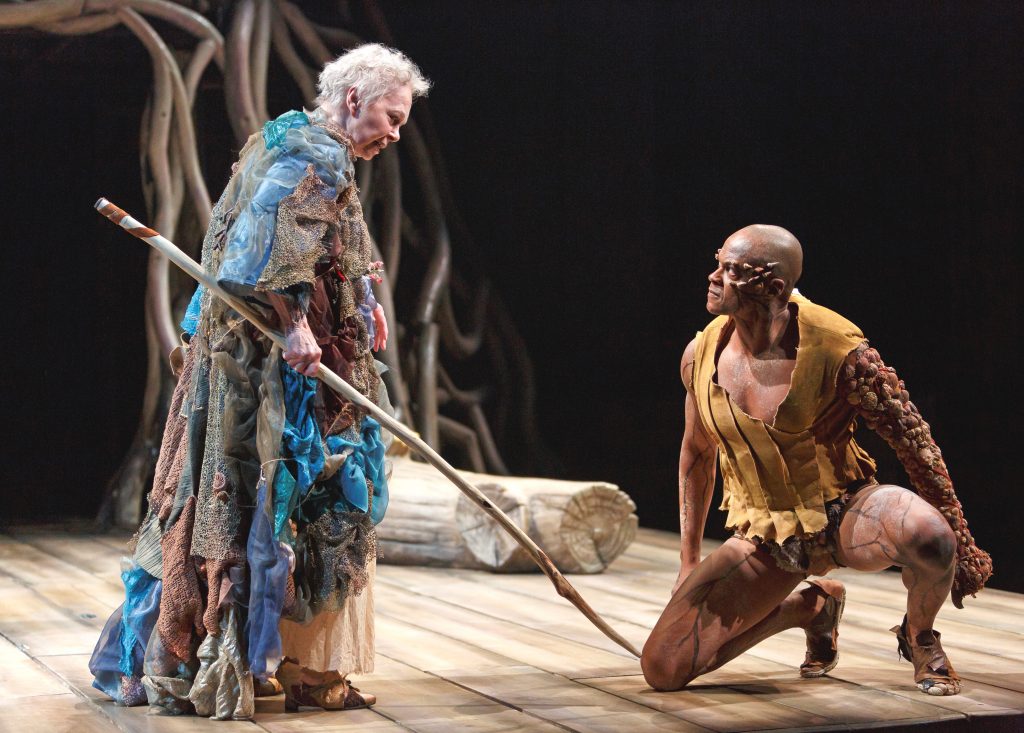 The casting of a regular-appearing young man as Prospero’s attendant Ariel, “invisible to every eyeball else,” while well-enough acted by André Morin, fails to evoke the other-worldly sprite who offers “to fly…to ride on the curl’d clouds” for his mistress. And while Prospero facilitates most of the action, the love scenes between Miranda and Ferdinand, “the first [man] that e’er I sighed for,” and the comical interaction between Caliban (a scaly Michael Blake) and the sailors that get him drunk, are the highlights. Ms. Henry’s Stratford debut was as Miranda in 1962, and while she now relishes Prospero’s poetic passages, her grip on the parent-character’s commanding presence is less than firm. This is not a “Tempest” for the ages, but paced nicely by Stratford’s artistic director Antoni Cimolino, it has its moments.

The Stratford Festival’s love affair with the American musical, established in recent years by marvelous productions of “Guys and Dolls,” “Fiddler” and “A Chorus Line,” continues with this year’s extraordinary “The Music Man.” Those shows all share a common factor: director-choreographer Donna Feore. Until now, I had not thought of “The Music Man” as a choreographer’s musical, but Ms. Feore’s dance-infused staging is a revelation, which is not to diminish the authorship (music, lyrics and book) of Meredith Willson, nor of the principal and ensemble cast of this splendid production. 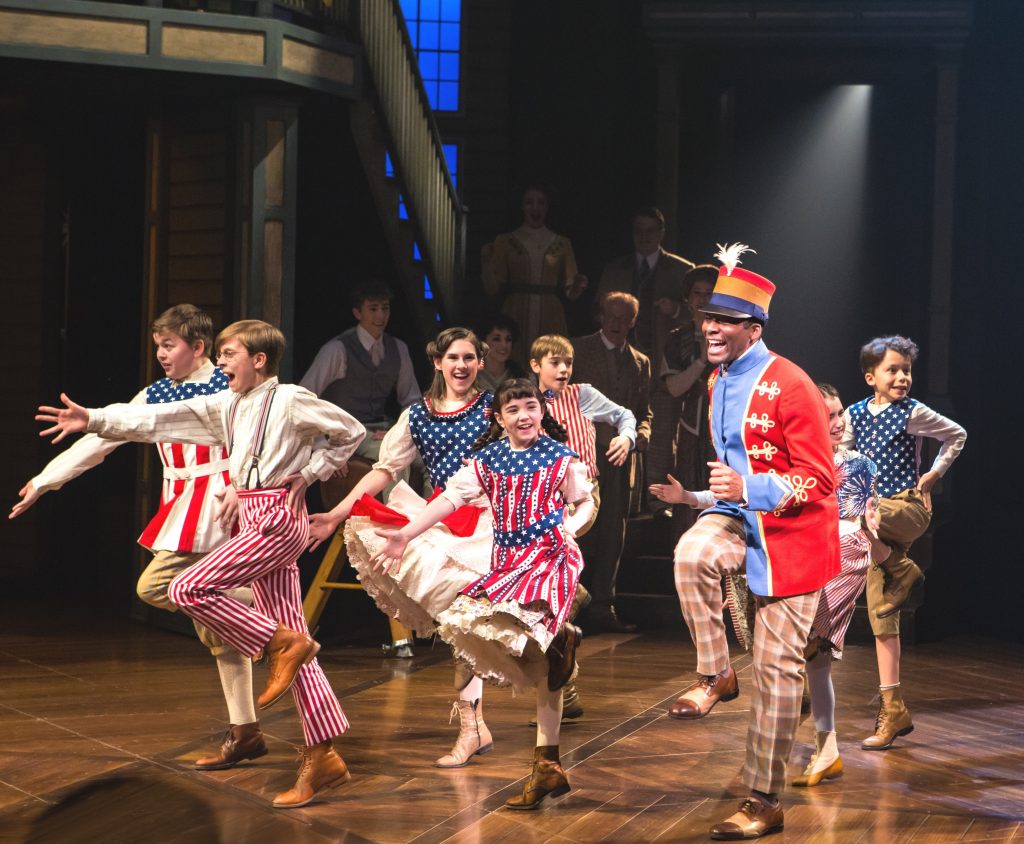 Professor Harold Hill (Daren A. Herbert) getting set for “76 Trombones”

Winner of the 1958 Tony Award (over “West Side Story”), “The Music Man” unfolds on July 4, 1912 in River City, Iowa, where itinerant “Professor” Harold Hill (Daren A. Herbert) cons the citizens into buying instruments and uniforms for their youngsters by promising to form a marching band using his “Think System.” Town librarian Marian (Danielle Wade) is onto his scheme from the start…and into his heart by the end. His “Ya Got Trouble” and “Seventy-six Trombones” are dynamic and her “Goodnight My Someone” and “My White Knight” were never more appealing.

Ms. Feore’s choreography cannot be over-praised. The opening, “Iowa Stubborn,” is folksy and athletic at once; “Marian the Librarian” is full-out aerobic; and “(She’s My) Shipoopi” is a veritable hoedown. The score of “The Music Man” is glorious, especially via music director Franklin Brasz’s brassy 19-piece orchestra. You’ll leave humming the tunes…with a special spring in your step. (Spoiler alert: the Think System works!)

So well-acted and directed is “To Kill a Mockingbird” that even those familiar  with Harper Lee’s 1960 Pulitzer Prize novel and the  Oscar-winning movie are held in suspense. The rabid dog in the street; facing down the KKK at the jail; Tom Robinson’s verdict: how will they play out? 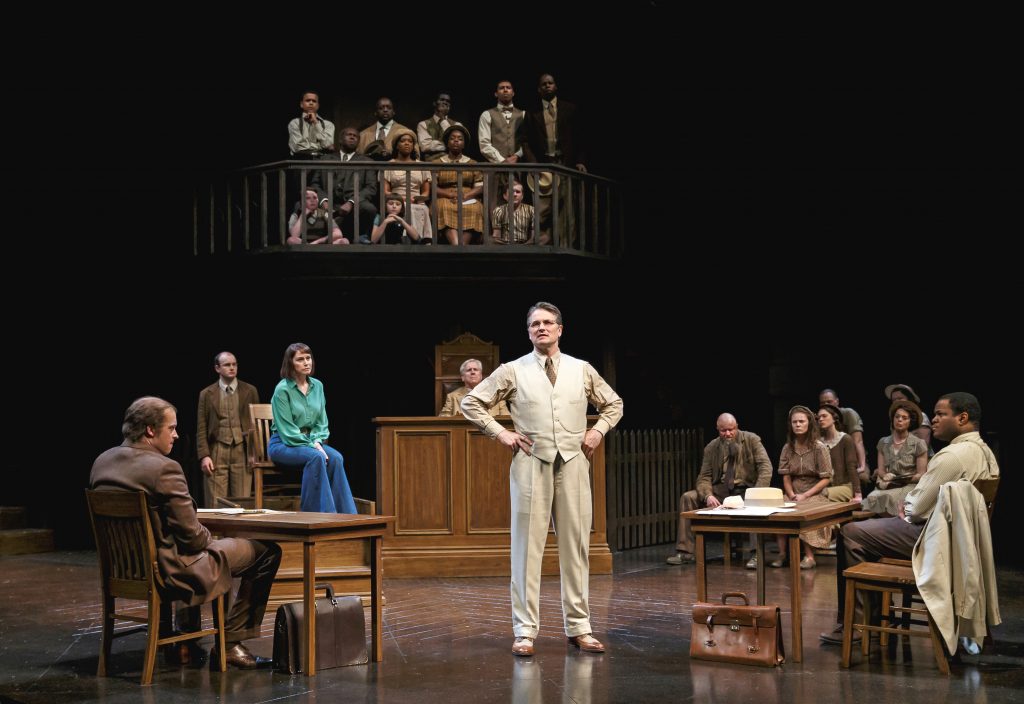 In a small Alabama town in the 1930s, white lawyer Atticus Finch defends a black man accused of assaulting a white woman. While the outcome is pre-determined by the racial makeup, the theme centers on the effect of the widowed lawyer’s actions on his children. Jonathan Goad is a peerless Atticus, and Clara Poppy Kushner and Jacob Skiba, barely teens (if even that), are remarkable as daughter “Scout” and son Jem. Narrated in part by the adult Scout (Irene Poole, wonderful) and fearlessly directed by Nigel Shawn Williams, Christopher Sergel’s 1991 play closely follows the book and movie, yet it is as crisp and engrossing as if you’d never even heard of it.

“Long Day’s Journey Into Night” is hardly uplifting, but what a chunk of Theatre! Eugene O’Neill’s barely-fictionalized autobiographical play clocks in at three and a half hours, but the journey into his family’s souls is worth taking, especially as acted here. O’Neill led a tortured life, wracked with guilt over his mother having become a morphine addict as a result of his difficult birth.

Completed in 1945 and released by his widow three years after his death in 1953 (contrary to his 25-year decree), O’Neill’s fourth Pulitzer-winner covers one day and night in 1912.  Miserly and hard-drinking James Tyrone rules his family with a tight fist. His wife Mary is going mad from her addiction and elder son Jamie is an alcoholic. Younger son Edmund (O’Neill’s alter ego) has been diagnosed with consumption, an affliction his parents minimize. (“…a summer cold,” his mother insists.) 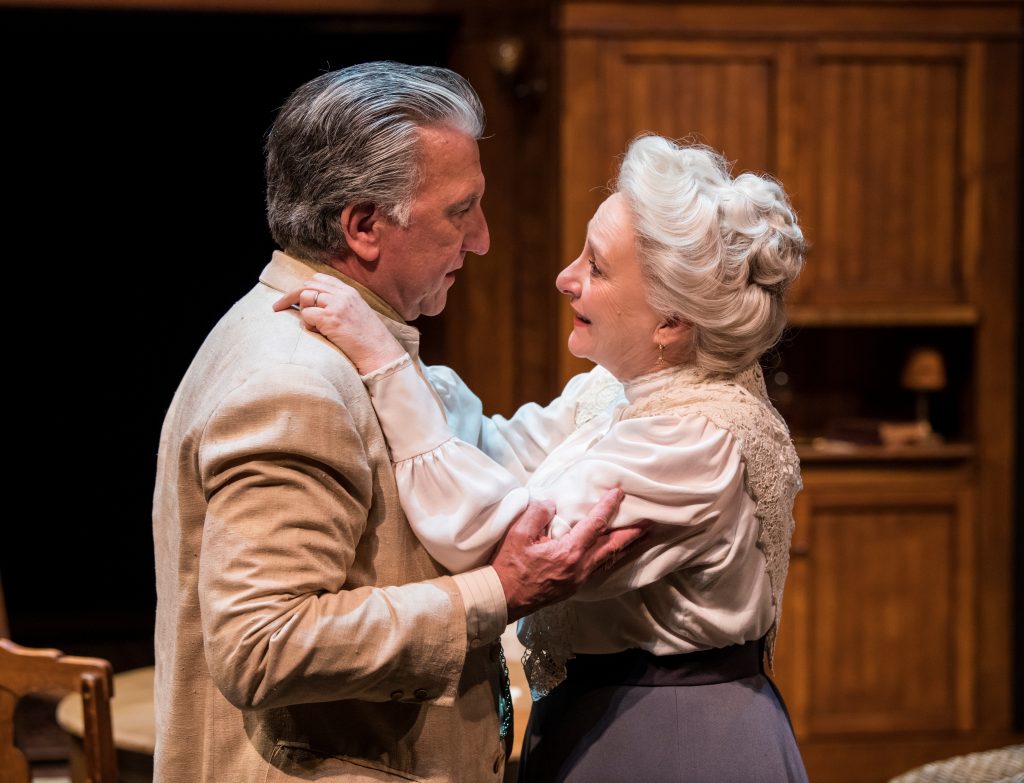 Scott Wentworth and Seana McKenna as James and Mary Tyrone

Sensitively directed by Miles Potter in Stratford’s intimate Studio Theatre, civility and pretense are stripped away until the tormented family stands exposed. It is penetratingly acted by Scott Wentworth as father James, Gordon S. Miller (Jamie), Charlie Gallant (Edmund), Amy Keating as household maid Cathleen, and by Seana McKenna, whose superb performance as Mary Tyrone is devastating. Together, they dig down to reveal what makes the Tyrone/O’Neill family tick. Or fail to tick.

Kinky, raunchy and bawdy pretty much describes “The Rocky Horror Show,” and while some theatergoers’ tolerance for boldness might be tested, Stratford’s extravagant revival of the 1973 musical is great good fun. For devotees of the ’75 cult movie, it is nirvana. Slipping from G-rated “Music Man” to this R-rated affair as smoothly as she might from heels to flats, director-choreographer Donna Feore pulls out all the stops. 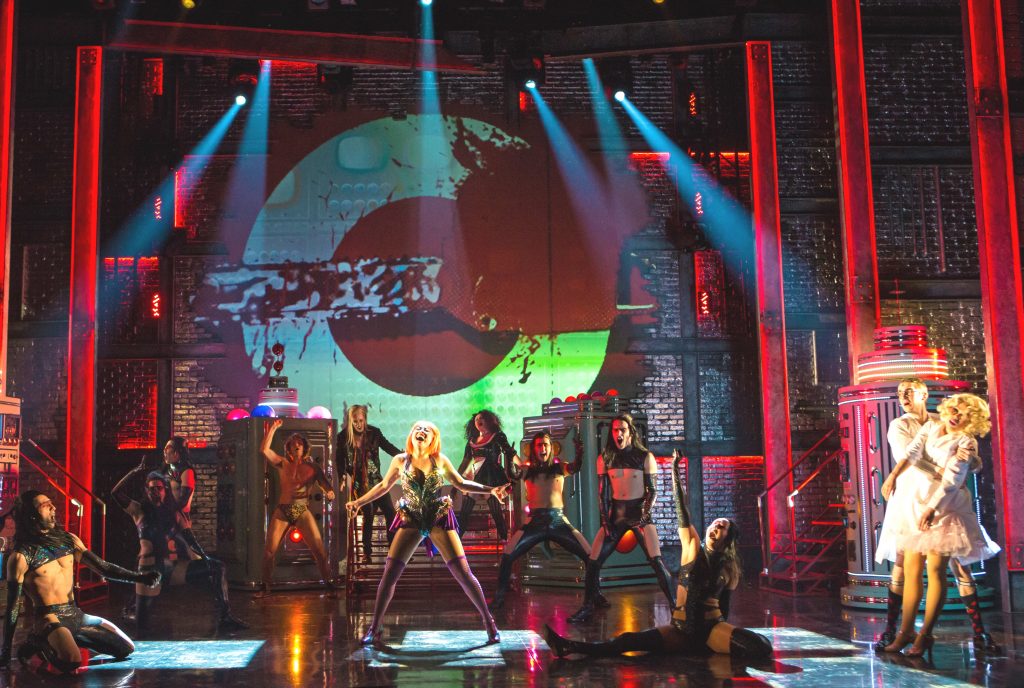 “Rocky Horror” in all its slendor

Naïve newlyweds Brad and Janet become stranded in an old castle with a household of Transylvanian weirdos. Their host, Frank-n-Furter, a sexually charged transvestite, creates Rocky, a hunky boytoy in a silvery Speedo. A dozen infectious rock numbers follow, plus scads of risqué one-liners, and various couplings, portrayed with little regard for modesty. Sparked by a small-but-LOUD electronic band (plus a “Drum Kit” guy) and a cast that’s obviously having a ball, it is a veritable perpetual motion machine.

Just as at “Rocky Horror” screenings, audience members, many in black patent leather and fishnet stockings, call out responses to the characters and dance at their seats. To ease inhibitions, the theater’s lobby bar is open before, during and after the show. (Helped me get into it.)  People who have never seen the play or movie are said to be “Rocky Horror” virgins. If that’s you, and you get to Stratford, catch this whiz of a show. What are you saving it for?

In a tribute to diversity, “The Comedy of Errors” covers every LGBTT gender classification. As if Shakespeare’s zany tale of double twin-sets in mistaken-identity situations were not confounding enough, two of those characters, written male, are played by women as women disguised as men. (Told you it was confusing.)

A penniless merchant is about to be sentenced to death when his woeful tale of his missing wife, their twin sons (both named Antipholus) and the sons’ twin servants (both named Dromio) moves the leather-clad Duke of Ephesus to grant him time to raise 1,000 ducats ransom. 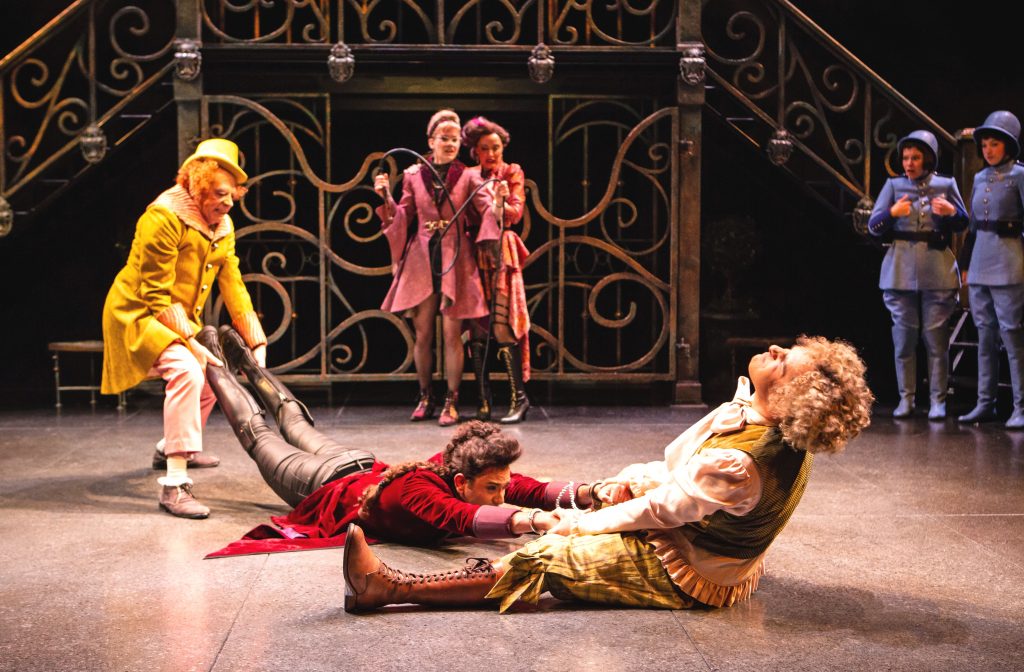 The Dromios, just pulling your leg in “The Comedy of Errors”

The whole entourage turns up, and after it is established that no one can differentiate between the twins (because Shakespeare says they can’t), there follows a tangled web among the Antipholuses, the Dromios, a wife, one sister-in law, a kitchen wench, an Abbess, a jeweler,  one unlikely courtesan, and a squad of Keystone Kops. Amidst the mayhem, all those gender-identifications emerge.

One wonders what Shakespeare would make of it. After all, his women were played by men. “Doth it worketh?” he might query. “Yea verily, Will. Thy ‘Comedy’ lacketh not for laughs.”