Oldies but goodies: “On a Clear Day You Can See Forever” at Irish Rep and “Anything Goes” in Westchester

The phrase ‘less is more’ is never more apt than when applied to Irish Repertory Theatre’s musical productions. Artistic director Charlotte Moore’s thirty-year old company, devoted to exploring Irish-American experience through works of theater, music and dance,  has a knowing knack for mining dated musicals for whatever magic lurks within them. For two recent examples, “Finian’s Rainbow,” in 2016, and “On a Clear Day You Can See Forever,” running now through September 6, magic is the key word, as much for their fantastical premises, as for the richness of their scores.

Burton Lane (music) and E. Y. Harburg’s (lyrics) 1947 “Finian’s Rainbow,” which features a love-struck leprechaun and crocks of gold at rainbow’s end, introduced “Old Devil Moon,” “If This Isn’t Love” and “How Are Things in Glocca Morra.” Eighteen years later, composer Lane teamed up with another lyricist, Alan Jay Lerner, to create an equally memorable score for “On a Clear Day You Can See Forever,” including “She Wasn’t You,” “What Did I have that I don’t Have?,” “Come Back to Me” and the glorious “On a Clear Day” (famously covered by Robert Goulet). Besides Ms. Moore’s streamlined adaptations (of the cluttered plots) and her smooth direction, both shows owe much of their glow to the selection of Melissa Errico to head the pared-down – but entirely winning – casts. 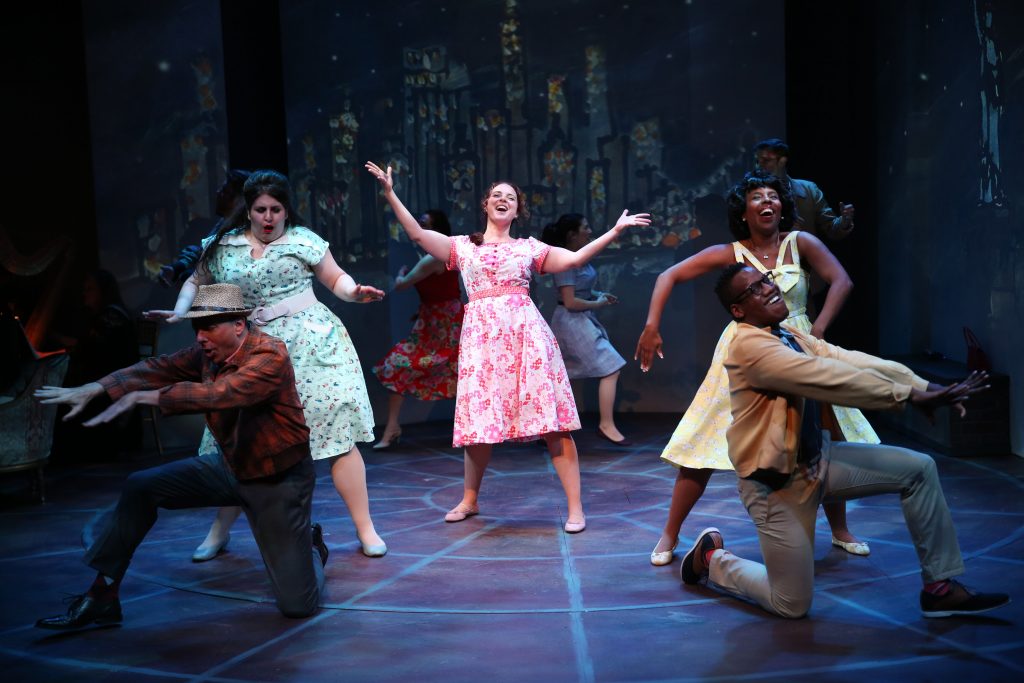 The inspiration for “On a Clear Day…” was actually Lerner’s fascination with the phenomenon of extra sensory perception (ESP). In the musical (the first with a top ticket price of $11.90), Daisy Gamble (Ms. Errico), under hypnosis to quit smoking, recalls a past life as Melinda Wells (ditto) in 18th Century London. The hypnotist, Dr. Mark Bruckner (Stephen Bogardus), becomes infatuated with Melinda, who emerges as a rival to Daisy, who also sees into the future and can make contact at a distance, which comes in handy when Dr. Mark sings “Come Back to Me” after she had run away. (It may sound complicated, but compared to the 2011 Broadway revival where they gender-switched Daisy into male David, with the female Melinda still his alter ego, this one’s clear as a crystal ball.) 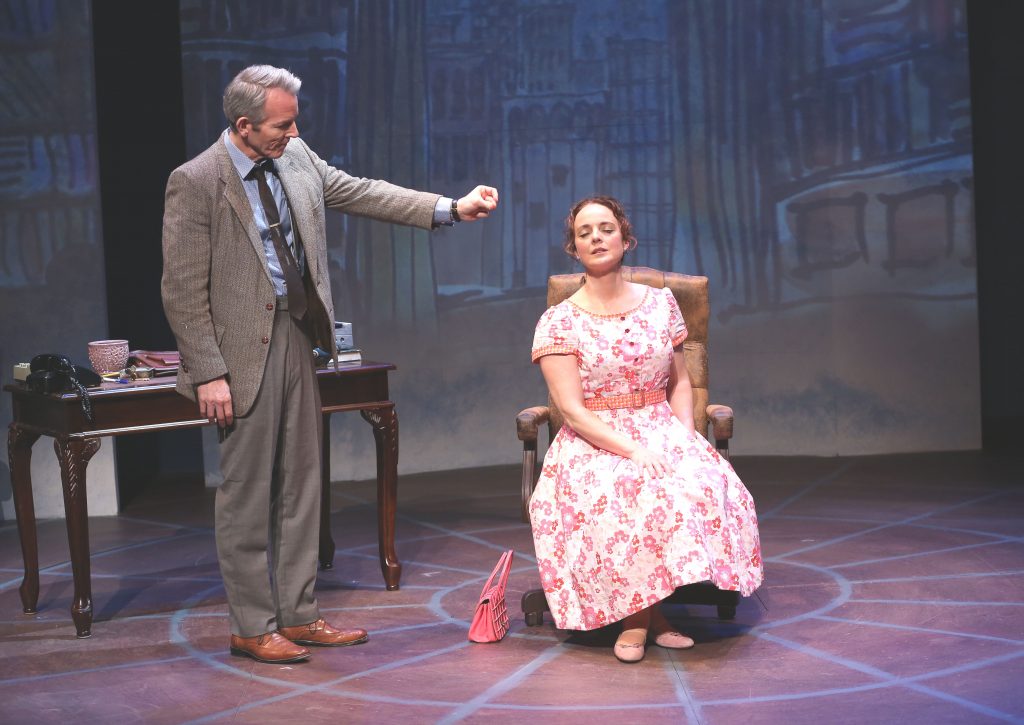 Ms. Errico is possessed of a rare magnetism that draws one’s attention to her every movement and expression, a quality on vivid display in Irish Rep’s intimate space. And she sings like a dream, with “Hurry, It’s Lovely Up Here,” sung to flowers that grow on Daisy’s command, and, later, Daisy’s lament “What Did I Have That I Don’t Have?” As Melinda, she sings “He Wasn’t You” with John Cudia, very imposing in 18th Century mufti as Melinda’s caddish husband. (“He was so unfaithful that I became a novelty.”) 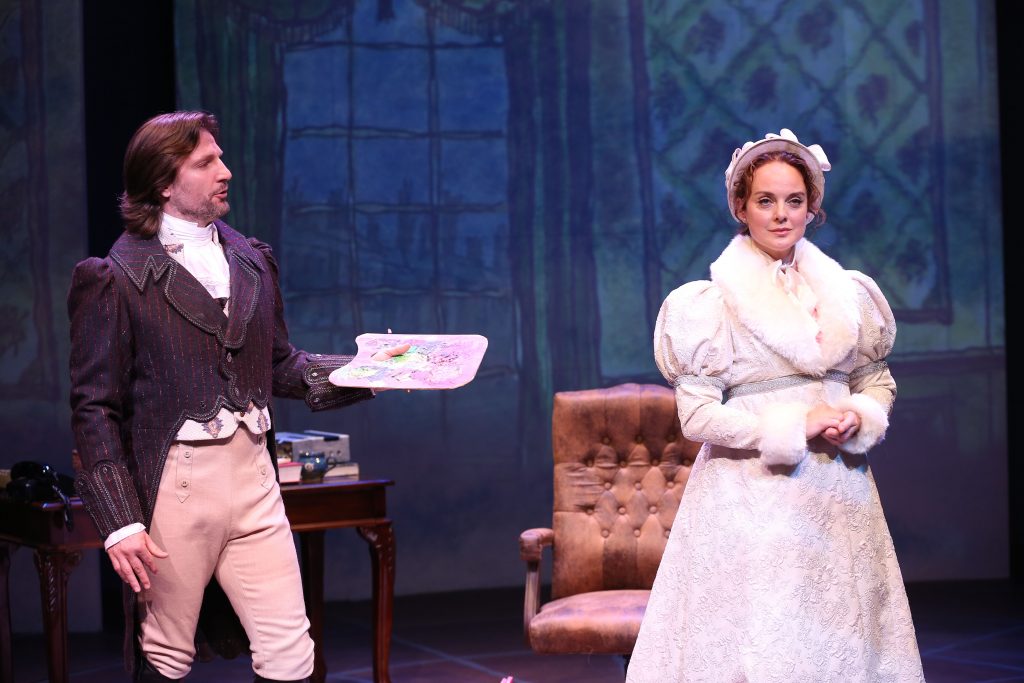 The rest of the eleven-member cast (B’way used 19) fills various roles effectively and aces the lilting harmonies. The major portion of the overture is the chorale singing of the title song, presented here from a catwalk overlooking the audience. Under John Bell’s musical direction, it sets the tone for the delights that follow, and conductor Gary Adler’s compact orchestra, which, blessedly, includes a harpist and a cellist, is ideal accompaniment.

James Morgan’s scenic design and his projections brighten up the proceeds, as does Mary Jo Dondlinger’s lighting. One quibble: In what I guess is a considered decision, Daisy and Mark wear the same costumes throughout. Melinda dons a full cape and a hat, but since the play makes a point of spanning two weeks, you’d think Daisy would have changed her dress. In whatever she wears, though, Melissa Errico is a delight, ensuring that one leaves Irish Rep on a musical-theater high.

[Composer Burton Lane is credited with having discovered 13-year old Frances Gumm in 1935. After hearing her sing “Zing Went the Strings of My Heart” at a Hollywood movie-and-stage-show theater, he brought her to the attention of bigwigs at MGM, where a few years later, re-named for all time, she was skipping along the Yellow Brick Road.]

Another Oldie-but-Goodie an hour from Midtown…

Elmsford, New York, bordering Tarrytown, is the home of Westchester Broadway Theatre, a professional (Actors Equity) company that stages a wide variety of shows from the American Musical Theatre catalog. Recent productions of “Annie Get Your Gun” from 1946 and “A Chorus Line” (’75) have been outstanding; currently, WBT is turning back the clock to 1934 with a high-spirited production of Cole Porter’s “Anything Goes.”

Set aboard a luxury liner on a trans-Atlantic voyage, the story-line, equal parts romance and comedy, is just an appetizer to the main course, Porter’s music and lyrics: “I Get a Kick Out of You,” “You’re the Top,” “Easy to Love,” “It’s Delovely” and the rousing title song. And that’s just the first act! 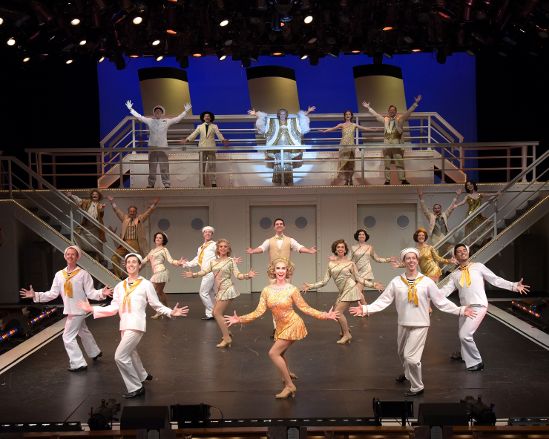 The cast of WBT’s “Anything Goes” [Photo: John Vecchiolla]

And speaking of appys and main courses, WBT puts the good name back into Dinner (or Lunch) Theatre, with an evening menu that includes Filet of Sole w/ Crabmeat Stuffing, Prime Rib, and more, including two different chicken entrees, neither of which brings to mind the well-worn dinner theater cliché. All served with salad, breads, fancy dessert and tea/coffee. There’s also a full bar for those who might want to sip a Chardonnay during “Blow, Gabriel, Blow” and “All Through the Night” – in act two!