High body-count in “Titus Andronicus” at Shakespeare of New Jersey

More people are killed in Shakespeare’s “Titus Andronicus” than in his Scottish play and Danish plays combined. “Titus” also preceded “Sweeney Todd” in the bad-guy-pie department by four centuries.

Shakespeare’s first-written tragedy is a gory affair that leaves little to the imagination. The play is among his least-produced, due partly to the unrelenting carnage, which has even led some scholars to question Shakespeare’s authorship, but it is his, alright. In fact, the “revenge tragedy” became an immediate hit from its first-recorded performance in 1594. (Some tastes never change.)

Run-of-the-mill murder, for political ambition, say, or assassination, is the least of “Titus.” While the play does delve into military and political scheming and corruption, it is the wantonness of the violence that grips audiences. Some productions finesse it; at a  university some years ago, each incident was mimed in slo-mo. At the Public in 2011, ketchup or some other red juice flowed freely. And I can report that no marionettes’ strings were severed during the Puppet Shakespeare Players 2014 off=Broadway “Titus.”

The Shakespeare Theatre of New Jersey production, running through August 5, does not shy away from the violence, depicting the various incidents explicitly, but indicating blood with sprays of red confetti (or just leaving it to imagination), which works fine.

The human sacrifice of a captured Goth soldier by Roman General Titus Andronicus sparks a horrific cycle of revenge, set in motion by Tamora, that soldier’s mother, who becomes Queen. A consummate conniver, she affects a regal façade, while her true intent is summed up in an aside: “I’ll find a way to massacre them all,” she confides.

It is more than an idle threat. She and her lover Aaron the Moor instigate a series of tortures and killings. The violation and mutilation of Titus’s daughter Lavinia by Tamora’s two sons takes savagery to an unimaginable level (perpetrated offstage. thank you.), and the revenge exacted against those sons and their mother further tests the limits. (Titus earns our sympathy, but he’s no saint either; early on, he kills his own son for blocking his way…for blocking his way!)

Whatever one’s tolerance for the above (and more), be advised that New Jersey Shakespeare’s “Titus” is much more than its carnage. The play is also rich in language and imagery. It is, in fact, composed 98 percent in verse, as opposed to prose. (“Hamlet,” for comparison, is 72 percent verse; “Lear” 75.) That lyricism is given its due through Brian B. Crowe’s astute direction and through some fine performances. 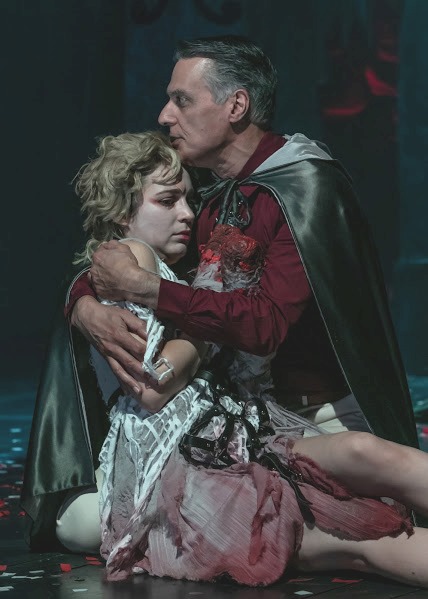 Titus is equally grieving and vengeful, both fully captured by Bruce Cromer and both inspired by Lavinia, who, wonderfully acted by Fiona Robberson, is heart-warming pre-assault and heart-rending after. Titus’s brother Marcus is the voice of reason, for which Robert Cuccioli’s own resonant timbre is a perfect fit.

Vanessa Morosco is a fiery Tamora – alluring and off-putting all at once. (Her dining scene is hardly funny as written, but is very funny, if a bit gross, as she plays it.) Aaron the Moor is just plain nasty, and Chris White plays him so. Aaron does have a soft spot for the “dismal, black and sorrowful issue” he fathers with Tamora, but even that is selfishly motivated.  Among the large cast, Elizabeth Colwell and Courtney McGowan make the most of roles as brief as their characters’ lives. 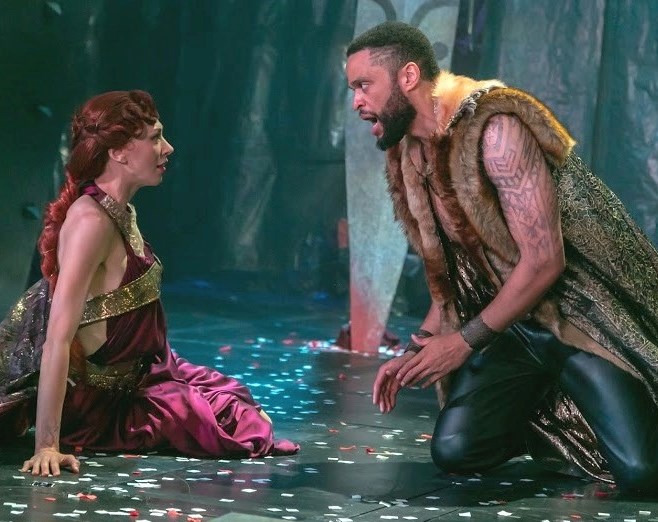 (Iago may be Shakespeare’s premiere villain, but at least he clams up as he’s carted away. “From this time forth,” he says, “I never will speak more.”  Aaron’s exit line is “If one good deed in all my life I did, I do repent it from my very soul.” They don’t come much badder than that.)

Ubiquitous fight director Rick Sordelet’s contribution cannot be over-praised; Lavinia’s final dispatch [spoiler? sorry] is simply devastating, and Dick Block’s set design, with its ominous dangling sword, is just right. The lighting (Andrew Hungerford) is atmospheric throughout, and Yao Chen’s costumes are character-accurate, if not specific to any period – an effect that lends universality to the piece.

The final scene is one of harrowing violence, enacted here vividly and artistically. It is Shakespeare, after all, and students as well as ardent fans of The Bard would be well advised to see this production. Who knows when comes another?