Tennessee Williams’ women tend not to fare very well. Blanche Dubois is led away by kind strangers, and Amanda and Laura Wingfield are stuck with each other after being twice abandoned. “Summer and Smoke”’s Alma Winemiller might be the most tragic of all, because she is aware of her downfall even as it proceeds. One could say she is even complicit. Not wantonly or defiantly, but still…she’s more aware of her choices than those others.

Blanche’s spirit does haunt Alma. “Streetcar” was written in 1947 and set contemporaneously in New Orleans; “Summer and Smoke,” was written a year later and unfolds between 1900 and 1916 in (fictional) Glorious Hill, Mississippi. In a way, Alma is sequel and prequel in one. 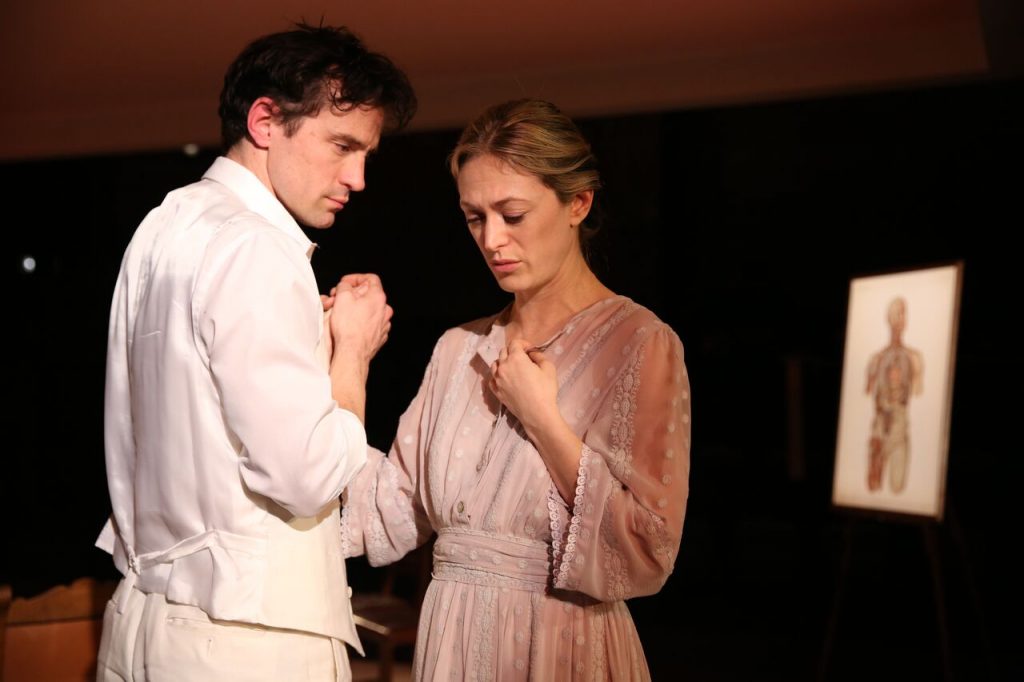 The daughter of a rigid Episcopal minister and a mother who has retreated into a state of “perverse childishness” after a vaguely defined ‘breakdown,’ Alma (Marin Ireland) yearns for Doctor John Buchanan, Jr. (Nathan Darrow), her neighbor and childhood playmate.  Their lives frequently intersect, but their clashing values preclude a lasting connection. John is a realist, with hedonist leanings, while Alma is a fragile, spiritual soul. Her very name, she reminds John, means soul in Spanish.

By the time Alma is ready to accept John on his terms, he has abandoned his former ways. Planning to settle down with a younger woman, who had been Alma’s music student (salt in the wound), John rebuffs Alma. “The tables have turned with a vengeance,” Alma laments.

Directed by Jack Cummings III, artistic director of the co-producing (with Classic Stage Company) Transport Group, the production is stripped down to its essential relationships. The only set pieces are a photographic rendition of the fountain in the town square and an anatomy chart in the doctor’s office, both on easels. No props either, except for six chairs carried on and off by the actors as needed. All others are pantomimed. (The one exception, a physical prop in the final scene, is impactful, but miming the others, like John’s stethoscope and Alma’s mother licking an ice cream cone, can be distracting.)

Hannah Elless, left, and Ms. Ireland at the ‘fountain’

Marin Ireland’s Alma is less of a fluttering southern belle than others I’ve seen. Her veneer of refinement masks Alma’s frustration at her inability to override her ingrained puritanism. She wants to, desperately; her self-denial is heart-breaking to witness. Ireland captures the playwright’s intent. Alma is “prematurely spinsterish,” Williams wrote. “Her true nature is hidden even from herself.” It is a beautiful performance.

Darrow is a laid-back John, Jr., even in the fellow’s reckless stage. It does amplify the ‘opposites attract’ element, but seems to slow the proceedings.  Others who impress include T. Ryder Smith as Alma’s overbearing father; Barbara Walsh as her dotty mother; and Hannah Elless as John’s eventual fiancée. As Mrs. Bassett, the town busybody, Tina Johnson nails every laugh, a more than incidental contribution.

The “Summer and Smoke” battle between repression and release is a losing one. Alma surrenders in the final scene where she goes off with a traveling salesman to the Casino where she had earlier rejected John’s advances. Tennessee Williams plays were intended to be staged, of course, but some of his in-script notes on character and setting are exquisite in themselves. That final scene is achingly affecting, as is Williams’ own note on the scene: “The mysteriously sudden intimacy that sometimes occurs between strangers more completely than old friends or lovers moves them both.”

Tell me you’ve never felt that.