Playwright Bran Friel has been called “the Irish Chekhov.” (Friel died in 2015 at 86.)  Like the plays of that century-earlier Russian author, Friel’s are character-driven rather than story-driven, with an emphasis on family relationships. Friel’s best-known, “Dancing at Lughnasa,” is no exception. Centering as it does on five Irish sisters, the 1992 Tony and Olivier Award-winning play recalls Chekhov in more than just the number of sisters. “Lughnasa” is lighter than Chekhovian in tone, but no less sparing of realities that challenge and in some cases overwhelm the characters.

“Dancing at Lughnasa” bares the souls of the five unmarried Mundy sisters in County Donegal in the summer of 1936, filtered through the memory of Michael (Harry Smith) the grown “love child” of one of the sisters. Michael’s narration weaves through the play, introducing some segments, clarifying others and revealing heart-rending developments in a disconcertingly casual manner that nonetheless adds emotional heft. 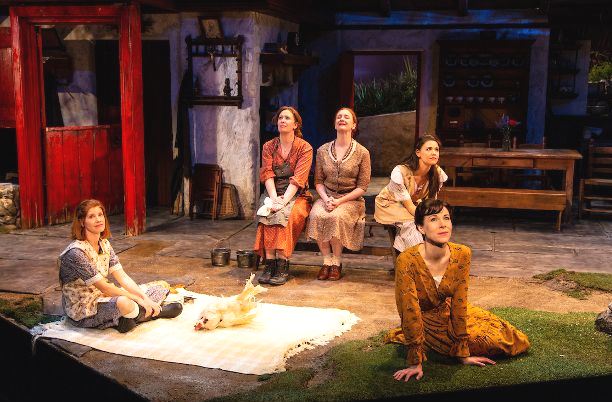 Kate (Megan Byrne), the eldest and default matriarch, teaches school; unsettled Agnes (Christa Scott-Reed) and the sweet, childlike youngest, Rose (Mandy Siegfried), hand-knit gloves for sale in the town. Together with deeply yearning Maggie (Mylinda Hull) and Michael’s unsettled mother Chris (Meredith Garretson), they care for their brother Jack (Michael Cumpsty), a Jesuit returned from a twenty-five year ministry in a Ugandan leper colony. There’s also Michael at age seven, unseen even as addressed by the others, and voiced by Smith from off to the side. (The Friel-mandated device works perfectly.) 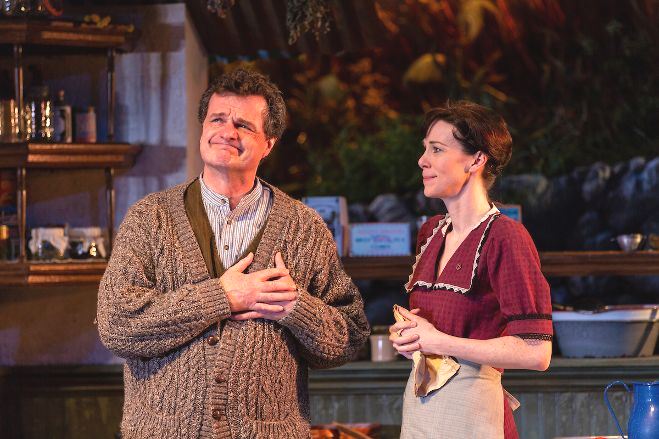 The Two River cast, which also includes Cillian O’Sullivan as Chris’s itinerant paramour and Michael’s father, functions as a unit. On designer Tobin Ost’s finely detailed set and aided by Jason Lyons’ mood-enhancing lighting, Jessica Stone’s sensitive direction shifts and isolates emphasis among the sisters in sync with the playwright. 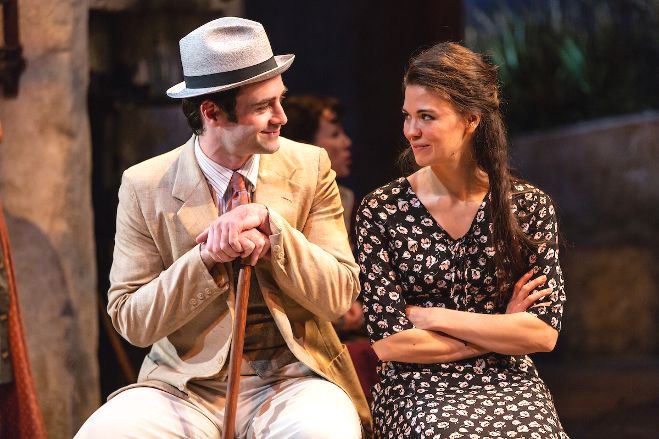 While we see enacted much of what Michael is remembering, it is almost as if it were our own memories playing out. The actual events, the particular sisters, are not our recollections, but Friel’s play affirms that some memories “owe nothing to fact” and that often, “atmosphere is more real than incident, and everything is simultaneously actual and illusory.”

“Dancing at Lughnasa” is an atmospheric play that blends reality and illusion. Two River’s exceptional production will linger in memory.

If good intentions were all, “Issei, He Say (or the Myth of the First)” would win a Pulitzer Prize. Chloé Hung’s play (her second written), world-premiering at New Jersey Repertory Company, is a discourse on an admittedly sore topic, but one deserving of more nuanced treatment than the play offers.

That topic is the internment of Japanese people during World War II, despite their long-established residence and even citizenship in – wait for it – Canada. (Long aware of that odious history in the United States, I had not known of it north of the border.)

The play’s POV is that of thirteen-year-old Lucy Chu (Christina Liang), whose family (Kathleen Kwan and Fenton Li play her parents) had emigrated from China to a Toronto suburb – not, the point is made, to that city’s Chinatown. Their Japanese next-door neighbor, Mr. Yamamoto (Stan Egi) had been interned during the war. (The time-set seems earlier than its designated 1969.) 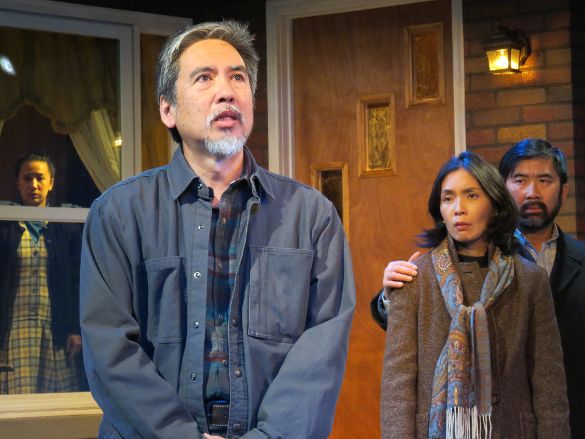 The first act establishes schoolgirl Lucy’s assimilation, her mother’s attempts at same and her father’s hostility toward the congenial neighbor. But for dad’s intransigence, it is, in fact, a rather endearing forty minutes, with Lucy and mom getting on very well with Mr. Y in their shared front yard (rendered perfectly by designer Jessica Parks).

Alas, the second act (also forty minutes) devolves into a formula sermon: establish the problem (well-founded resentment); take a side; state your case (twice maybe); and seque to a sentimental wrap-up.

No one would suggest that separating families and shoving people into virtual prisons based on their ethnicity is anything but barbaric. Well- acted by all four and directed smoothly by Lisa James (references more to first-act than second) “Issei, He Say” makes that point – loud, clear and in ABC fashion.