Tennis, anyone? “The Last Match” off-Broadway

There’s a mind game we used to play in college built around someone finishing the sentence “Life is like a ­___” with a concept (film noir, say) or item (a coke bottle is one I recall). That game came to mind as I watched “The Last Match,” which is essentially a 90-minute response to “Life is like a tennis match.” Or vice versa. Granted, not the most challenging of allegories, but Anna Ziegler puts a neat spin on it in her play about a U. S. Open semi-final match between Tim (Wilson Bethel), an aging-out (he’s 34) American superstar, and Sergei (Alex Mickiewicz), a younger up-and-coming Russian phenom.

The play is set at that match and, in flashbacks, at various other locations. The match is played virtually set-by-set, with the running tally appearing on side-wall scoreboards. The players talk to one another, mostly in taunts, and both soliloquize inner thoughts that provide added tension and even influence the back-and-forth scoring. In their on-court stances, serves and returns, both Bethel and Mickiewicz look like actual tennis players; even though it’s in pantomime, it has the feel of watching an actual match. 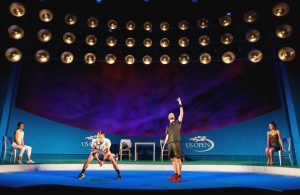 Both actors create likable characters, and besides one’s possible bias toward the U. S. vs Russia, the play doesn’t foist a favorite on the audience. Tim is the more intense, concerned as he is with his wife’s approval and about whether or not to retire at the ripe old age of 34.  Sergei is given to wisecrack asides, but he is no less serious about the match, revealing both facets with “How can I let this walking injury defeat me,” after Tim pulls a muscle.

The flashbacks involve the men’s wives, with Tim’s, Mallory (Zoe Winters), carrying the burden of failed pregnancies, including one devastating loss. Sergei’s wife Galina (Natalia Payne) is a feisty part-time actress who spurs him on with mock anger and pointed sarcasm. Under Gaye Taylor Upchurch’s direction, the staging and the three relationships (the wives do not meet) are smoothly coordinated. Bray Poor’s sound design, integral to “The Last Match,” is exceptionally well executed. Expertly choreographed into the action, an authentic whaaap sound accompanies every pantomimed serve and return. Complete with a few audible pre-serve ball-bounces, it sounded like courtside to me. 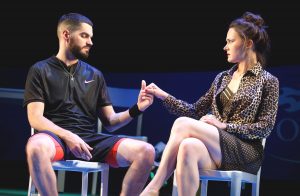 Sergei (Alex Mickiewicz) and Galina (Natalia Payne) off the court

Bringing “Life is like…” full circle, Ms. Ziegler’s play ends with a reminder that none of us knows for sure at any given moment what the next ones might hold. That ending, like the whole of “The Last Match,” puts you in the action.