Careful what you wish for: “Mutual Philanthropy” at NJ Rep

We like to think we can size up strangers in a first meeting, but we really can’t. Everyone is guarded for a while, with deep feelings and values held in check, at least until the atmosphere is safe.

That’s why I’m always amazed when I go into a new play knowing nothing at all about the characters and come out with insights into their behaviors, desires, fears, motivations, the whole package. In the case of Karen Rizzo’s “Mutual Philanthropy,” it took a mere ninety minutes. As well-acted as it is written, the play’s east coast premiere runs through November 19 at New Jersey Repertory Company in Long Branch.

When struggling sculptor Lee (Joseph Carlson) and his working-to-support-them wife Esther (Vivia Font) are invited to dinner at the lavish home of  wealthy investment banker Charles (James Macdonald) and his neglected wife Michelle (Laurel Casillo), it is with the expectation that the hosts plan to purchase Lee’s ‘Reclining Man’ sculpture for a few much-needed thousand bucks. (The couples’ children attend the same grammar school in the gentrifying Los Angeles area neighborhood where they all live – in contrasting digs.) 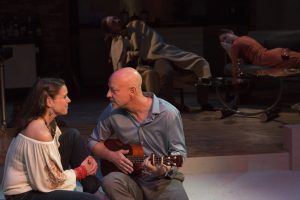 What Charles and Michelle do have in mind involves a lot more money and an arrangement that is less titillating than what you might be thinking, but is no less demanding. The proposal, in fact, leaves Lee and Esther agape. Details emerge in the course of a boozy cocktail hour, during which privacy is discarded, relationships are strained and emotion reigns.

Not revealing many more plot points is not being coy (or lazy); it’s just more fun to find things out along with the characters. And for all its serious content, “Mutual Philanthropy” is fun. Mentioning the food fight is more teaser than spoiler, and the underlying sexual tension across the marriages is obvious early on. (On that front, one scene, which includes a reference to the title, is discomfiting; if it isn’t, you haven’t been paying attention.) 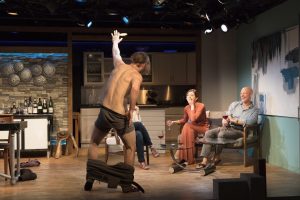 The acting is like a tight string quartet. Each of the four is a singular individual while also establishing distinct relationships with the other three. Evan Bergman has directed them with just the right blend of freedom and restraint. That the play is so incisive doesn’t make it easier, but does enhance the clarity. “Why are we paying the high-school age baby-sitter $12 an hour?” asks Esther before they enter the house. “Her dad’s out of work,” Lee replies. Need to know any more about him? “We want more than what we need,” Charles says later. “And when we get more,” he goes on, “the more becomes the need.” Hedge fund mantra, anyone? 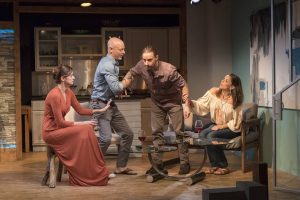 The wives are complex women, and Casillo and Font both peel back their layers one-by-one as needed. What causes Michelle to break down crying might not move you to tears, but Casillo leaves no doubt that Michelle’s are genuine. Esther is playwright Rizzo’s deepest character. At any given moment she knows more than she lets on, a quality that Font conveys ever so subtly.

The technical aspects are all a playwright could wish for. Jessica Parks’s set design bespeaks luxury and spaciousness (How does she do that on the relatively small stage?), and the lighting (Jill Nagle) sets the mood perfectly. The costumes are just right, with Ms. Casillo owing a special thanks to designer Patricia E. Doherty for Michelle’s tastefully slinky hostess item.

The ending of Ms. Rizzo’s play is especially well crafted. A nearly off-hand exchange between the women speaks volumes, and how the men might adjust (or not) to each other and to the situation could go any number of ways. It’s hardly a fixed resolution, but a play that creatively poses thorny questions can be much more interesting than one that purports to answer them. “Mutual Philanthropy” accomplishes the former.