Curvy Widow on 43rd Street and Songbook Summit on 59th

Pinpointing a target audience for some shows is easy. Ten-to-twelve-year-old girls whose parents took them to “Annie” were seen a decade or so later with one another at “Rent,” while their college professors were at a revival of “Mourning Becomes Electra.”  Along those lines, it is unsurprising that, at a recent Saturday matinee of “Curvy Widow,” I sat among a couple hundred women within shouting distance of 55, either way. And judging by their reactions, they were all having a fine time, vicariously sharing the racy activities of leading character Bobby, one of their own, played with earthy humor by Nancy Opel, one of their own. (Admittedly, I got into it, too, just not to the same extent.) 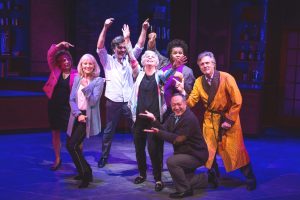 The title character is a woman re-entering the dating scene after the death of her husband of some 30 years. Now a musical, it was written as a play by Bobby Goldman, who lived it after her own husband, writer James Goldman (“The Lion in Winter”), died in 1998. The play is “98.5 percent autobiographical,” offers Ms. Goldman, now 68.

After more than a year, Bobby, then 51, started dating again – on orders from her shrink, who told her to “go out and get laid” (that is part of the true 98.5 percent, she swears). ‘Curvy Widow’ was her handle on Match.com – and on a more risqué site she discovered (and dallied on for a while) during her cyber exploration. 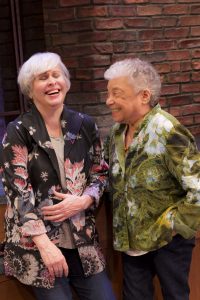 The fast-moving show zips through about a dozen dating experiences – most of them misfires, a few promising, and all amusing (with, hey, a couple of consummations). Drew Brody’s plentiful score (16 numbers) is serviceable. You don’t leave humming the tunes, but Brody’s lyrics are clever and character-enhancing.

Bobby is front-and-center in nearly every scene, and Ms. Opel is up to the heavy lifting. There’s precious little subtlety in the script (see shrink’s comment above), but the crafty performer keeps the heaviest gags from landing with too much of a thud. An accomplished belter, she adds heft to music director Andrew Sotomayor’s tidy orchestra (piano, drums, cello).

Three gifted women play Bobby’s supportive bff’s and three versatile males play all the men that she encounters, including the corporeal ghost of her departed husband, who is less than pleased with her carnal explorations. (Alan Muraoka is especially effective as the advice-giving shrink and as Bobby’s first date, whom she slaps before surrendering her “widow’s maidenhead” to him.) Each of the trios has a vaudeville-style routine: the men’s “Looking For” and the gals’ “The One” are highlights (and breathers for hard-working Nancy).

Peter Flynn’s spirited direction makes the 90 minutes fly by on Rob Bissinger’s more-than-meets-the-eye set, a perfect fit for the venue. A couple blocks west of Broadway, it is a short walk for the ladies who lunch.

Bet you can hum “I’ve Got the World on a String,” “Get Happy” and “That Old Black Magic.” Quick: who wrote them? No? Maybe if I cited the best-known song in his – or anyone’s – repertoire, “(Somewhere) Over the Rainbow,” you’d come up with…Harold Arlen. If you had made it to Peter and Will Anderson’s “Songbook Summit” at 59E59 Theater before August 13, you’d know about those Arlen songs and more, including lesser-known aspects of the brilliant composer’s life.

Didn’t make it by the 13th? Not to worry; George Gershwin and Richard Rodgers get their “Songbook Summit” weeks this month: August 15-20 and 22-27 respectively.

Peter and Will Anderson are unique, even for twins. They look alike, sure, and both are accomplished musicians – Peter on tenor and soprano sax as well as clarinet, and Will on alto sax, clarinet and flute. Most interesting, as I’ve seen them twice now, is that their musical ‘sense’ – taste, maybe, or vibe – coincides to an uncommon degree. It’s as if they were one person with the ability to play two instruments at once. (Remember Rahsaan Roland Kirk? Probably not.)

Joined by pianist Jeb Patton, drummer Phil Stewart and outstanding bassist Clovis Nicolas, their arrangements are tight, with a minimum of improvisation. The focus is on the composers and the songs, which could not be better rendered. The upbeat numbers really swing (Arlen’s “Get Happy”), and the moody pieces are treated with respect, as “Over the Rainbow,” sung by Molly Ryan. (She’s done no favor, though, by having the iconic b/w still of  Dorothy Gale projected behind her throughout.)

A full third of the 90-minute show is devoted to biographical background, part narrated (by Will) and part through fascinating projections. Arlen’s stage-musical contribution was relatively minor (“Bloomer Girl,” “Jamaica” and four others), but theater geeks are advised to pounce on the Gershwin (14 B’way musicals) and Rodgers (23) events. Can’t beat it for 35 bucks!