Shakespeare, Shaw and More: North of the Border

William Shakespeare and George Bernard Shaw are the raisons d’être for the Stratford and Shaw Festivals in Ontario, where those venerated playwrights (and others) are staged by world-class directors, actors and designers. The venues being a couple hours’ drive apart makes a tandem visit a piece of cake, but an either-or coin-flip would be a no-lose. I recently attended both.

When, in Shakespeare’s only double-titled play, “Twelfth Night or What You Will,” shipwreck-survivor Viola assumes a man’s dress, demeanor and name (Cesario), she and her twin brother Sebastian are indistinguishable from one another, causing no end of confusion among their would-be paramours. Viola digs her employer Orsino, who knows her as Cesario, while Orsino yearns for Olivia, who lusts for Cesario. Talk about your triangles! 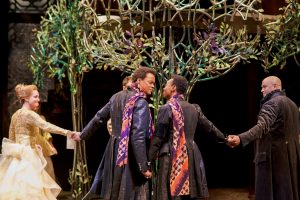 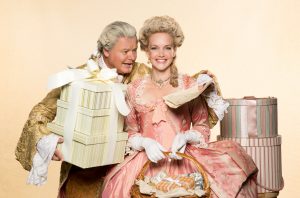 Against a stream of unfounded gossip, conveyed by aptly named Lady Sneerwell and Sir Benjamin Backbite, the story centers on the Teazles’ May-December marriage. Ms. Taylor plays the faux-demure bride to glamourous perfection, and Wyn Davies, master of the double-take, goes from impishness to consternation in a flash. Stratford’s artistic director Antoni Cimolino held a loose rein on this one, a wise choice, considering the talent. The play’s so-called ‘screen scene,’ in which Lady T overhears conversations while she’s concealed, is one of the funniest set-ups in all of English comedy. (Sheridan’s line about marriage between a much older man and a young woman is too delicious to not cite: “The crime carries the punishment.”)

In another casting coup, Evan Buliung plays both Mercutio and Sky Masterson as if born to them. Seen on consecutive days, the disparate characters are both richly realized by the consummate actor. Director Scott Wentworth’s is a traditional “Romeo and Juliet,” which, with some oft-cut content restored, runs long. The sweetest moments do impress, with Antoine Yared and Sara Farb a well-matched, passionate title couple. Stressing their youth (Juliet is two weeks shy of 14, Romeo a bit older) deepens the empathy.

Buliung’s exuberant Mercutio dominates his scenes up to the duel that ignites the tragedy. And while Stratford’s Elizabethan line readings always enhance accessibility, I had never before heard Mercutio’s wry self-diagnosis as “ask for me to-morrow and you shall find me a grave, man.” (That’s the actor’s comma, not the playwright’s.) 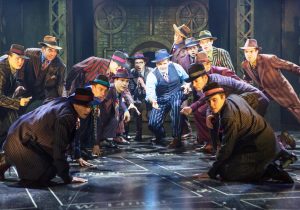 Luck be a lady: Sky Masterson (Evan Buliung) and the crapshooter guys

Buliung’s Sky Masterson establishes immediate chemistry with vocally shimmering Alexis Gordon as Mission doll Sarah Brown in “Guys and Dolls.” Early on, they both sing “I’ll Know,” and, yup, you know. “One of the finest pieces of musical theatre ever created,” says Donna Feore, whose double-duty as director/choreographer makes for a seamless production. As the counterpoint couple Nathan Detroit and Miss Adelaide, Sean Arbuckle and Blythe Wilson ace their songs and get their laughs, although whoever coached Arbuckle (and some others) on 1950s NYC accents apparently never ventured south of Albany. (Guys and ‘Dawls’?) 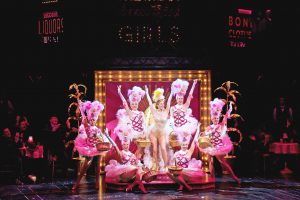 “Guys and Dolls” features updated orchestrations (18 terrific musicians under Laura Burton’s baton); sexier-than-ever Hot Box dancers (“Take Back Your Mink” elicits gasps as garments are shed); a show-stopping “Luck Be a Lady” sewer ballet; and, in a nifty stroke, a ten-second blackout in the choreographed overture during which the street-scene ensemble changes from black-and-white into bright colored, eye-catching costumes. Frank Loesser’s music and lyrics get their due, and the 67-year old book, adapted from Damon Runyon’s characters by Jo Swerling and Abe Burrows, never sounded fresher.

One could write a rave review of Stratford’s “Treasure  Island” without even mentioning the performers, good as they are. The sets, lighting, sound, costumes and projections are spectacular.

Digging up the treasure!

Robert Louis Stevenson’s story is compressed without sacrificing plot points. From the Benbow Inn, we set sail, treasure map in hand, to retrieve the fortune, with young Jim Hawkins (Thomas Mitchell Barnet) and Long John Silver (Juan Chioran) on board. The colorful staging has Pirates descending on ropes, exploding muskets, a realistic storm at sea, and the inspired casting of Cirque-worthy aerialist Katelyn McCulloch as Ben Gunn. The play is geared toward youngsters, but there’s no age limit on its enjoyment.

The one-act “Bakkhai,” adapted by Anne Carson from a Euripides poem about Dionysus, son of Zeus, is a cautionary depiction of female empowerment. Directed by Jillian Keiley, it includes a lurid scene of a son’s dismembered body (by his mother); a cross-dressed masturbatory scene; and seven robe-clad women writhing in orgasmic ecstasy for which an “Intimacy Choreographer” was engaged. You’d think that would cover it, but if such a simulation is your bag, I refer you to Meg Ryan in “When Harry Met Sally.”

The Stratford Festival also includes “Timon of Athens,” “HMS Pinafore,” and more. For schedule and other info (or to request a brochure by mail): 800-567-1600 or online at stratfordfestival.com

In 1428-30, village girl Jeanne d’Arc’s heavenly “voices” directed her to repel the English from France and elevate the bullied Dauphin to the throne (as King Charles VII). Joan defied powerful churchmen and landed gentry alike, led troops into battle, secured Charles’s coronation and, in 1431, was executed – burnt at the stake – for heresy, witchcraft and sorcery.

Shaw’s play humanizes The Maid, as Joan was known, without stinting on the harsh realities; his play is warm, affectionate and frequently amusing, qualities realized in director Tim Carroll’s excellent production. Surrounded by a cast of superb character actors, Ms. Topham inhabits Joan’s reverence, her youthful self-confidence at 17 (or 19, she’s not sure which), her warrior persona and her maturing into the threat to the establishment. Topham delivers a Joan we cheer on even as we ache to shield her from harm. 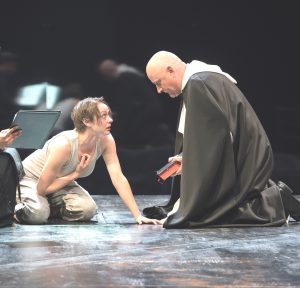 Whether or not you are familiar with the period’s church/state/royalty conflicts or with the Hundred Years’ War, the tale is as gripping as any you’ll come across. Shaw, not wanting his history of Joan to end with her execution, has her former associates and antagonists acknowledging her 1920 canonization in a ghostly epilogue.  Saint Joan’s final speech is plaintive: “O God that madest this beautiful earth, when will it be ready to receive Thy saints? How long, O Lord, how long?” As movingly as Sara Topham delivers the lines, Shaw might have written them for her.

Director Carroll’s approach to Shaw’s “Androcles and the Lion” is as different from his “Saint Joan” as the plays are from one another. Both deal with religious martyrdom, but where “Joan” is a serious play leavened with humor, “Androcles” takes a more casual, comedic approach.

On the run from Roman persecution, Androcles, a Christian, extracts a thorn from the paw of a distressed lion.  Later, the same lion spares his life in the ring. Carroll’s version has pre-selected audience members (four in each act), tossing rubber balls onto the stage at times of their choosing. The balls signal a cast member to sing or share a personal anecdote, or some such.

Improvisation is less a talent than a skill, one in which the “Androcles” cast is unschooled. One young actor related (with guttural sound effects) how he had been spat upon repeatedly by a bully in high school, which, he told us, made him a better person. Hearing about it did not do the same for me.

Ah, but the saliva saga was but a blip between “Saint Joan” and “Me and My Girl.” The 1935 musical’s book was updated (by committee) in 1984, but every note of Noel Gay’s original music is, blessedly, intact.

Sparks fly when brash Cockney Bill Snibson (Michael Therriault) turns up as the long lost heir to the Earldom of Hereford. Bill’s devotion to his Lambeth sweetie Sally Smith (Kristi Frank) conflicts with the snooty Hereford clan’s efforts to dump Sally in favor of a more suitable consort.

That Bill wins them over and sticks with Sally is a given; how Therriault and Frank negotiate the process is a delight from start to finish. Both are first-rate singers and hoofers in true Music Hall tradition, but with up-to-date verve and style. 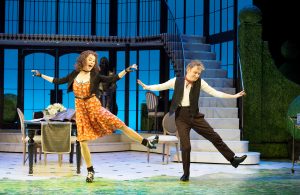 If Therriault’s take on the title song and Frank’s beautifully sung “Once You Lose Your Heart” don’t stick in your head you’re tonally afflicted. And the rousing “Lambeth Walk” number is a bona fide show-stopper.  Director Ashlie Corcoran captures the show’s “joy and playfulness” (her aim). She, music director Paul Sportelli and choreographer Parker Esse are in perfect sync.

The performance I attended was suspended for 20 minutes during the first act due to “technical difficulties” after which the rest of the show was played on the interior set that remained stuck in place. (A croquet match in the library? So what.) The audience, none of whom left, were invited to re-visit the show during its run. If I lived in the vicinity I would have taken the offer. Spending two more buoyant hours with this Bill Snibson and his girl? Who wouldn’t?

Located in Niagara-on-the-Lake, Ontario, the  Shaw Festival also features “The Madness of King George III,” “Dancing at Lughnasa,” an adaptation of “Dracula,” and others through mid-October. For info and a comprehensive brochure: 1-800-511-SHAW or at shawfest.com