“The Government Inspector” is worth inspecting…

Part of my enjoyment of Red Bull Theater’s “The Government Inspector” derived from not knowing how accurately Jeffrey Hatcher’s adaptation translates Russian author Nikolai Gogol’s 1836 source play, “Revizor.” Or, for that matter, whether or not the performance is in the original style. Based on Hatcher’s billing as adaptor (not translator) and the actors’ eye-winking delivery, I’d say we’re not in Tsarist Russia anymore.

But the play, about bureaucratic hypocrisy, has not been up-dated. It wasn’t necessary. Modern audiences can see equivalent contemporary versions of Gogol’s characters in the newspaper or on TV. You’ll have no problem making the connection between the venal 1830s Russian politicos and a 21st Century town council or House of Representatives committee hearing. Gogol himself said that he had “collected everything that was evil in Russia, all the injustices committed in places where justice is most of all expected…and laughed it off.” In that vein, “The Government Inspector” is a spot-on Trump spoof. 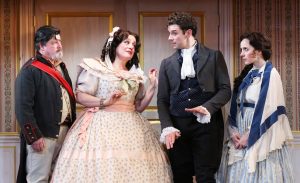 The Mayor and administrators of a provincial Russian town learn that a high-ranking government official is coming, incognito, to investigate their town, which, we learn, is built on a foundation of bribery, corruption and ineptitude. The recently constructed (with public funds) hospital, for instance, ended up with rooms so small that they can’t get the beds through the doors. The Gogolcare solution: build small beds inside the rooms, empty the kindergarten, put the kids in the rooms and change the sign to a children’s hospital.

As it happens, a ne’er-do-well gambler, too broke to pay for his food or lodging, is mistaken for the Inspector and is upgraded to the Mayor’s own home where he is showered with as many rubles as he can stuff in his pockets. And, oh yes, the attentions of the Mayor’s more-than-willing shrewish wife and his at-first-standoffish daughter, who finally sheds her self-control. A cast of inspired zanies play the town poobahs in a broad style that went out of fashion waaaayy back when, but which is more than welcome back for this play’s two hours.

The town’s judge gave up atheism for agnosticism (“more room to maneuver”); the school principal cannot fire a teacher (tenure in 1836?); the postmaster puts the pris in prissy (and opens everyone’s mail). They and others, including the Mayor’s wife and daughter,  fawn over the pretender (Michael Urie), who finally realizes “I think they think I’m someone else.” His drunk scene may run a bit too long, but Urie is up to the task, including an acrobatic maneuver that caps off the first act. (If you thought Urie worked hard in his multi-award-winning “Buyer and Cellar,” check this one out.) 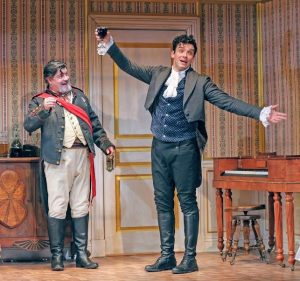 Michael McGrath as the Mayor and Michael Urie as the Government Inspector (or is he?)

The host theater, The Duke on 42nd Street, is a versatile venue. Recently configured as a soccer practice field with seating along the sidelines (“The Wolves”), it is now designer Alexis Distler’s double-decked stage with floor-level playing areas and a wide “upstairs” that’s the mayor’s parlor, complete with multiple farce-essential doors.

Under the artistic direction of Jesse Berger, who directed this piece, Red Bull Theater Company specializes in lesser-known plays and musicals from Elizabethan, Edwardian and other periods – and makes them relatable for modern audiences. You’re unlikely to find another production of “The Government Inspector” any time soon. This one, for historical and sheer entertainment reasons, is worth inspecting.

Through June 24, 2017 at The Duke, 229 West 42nd Street.  And btw: the real Government Inspector does show up, surprising every character in the play – and everyone in the audience!

(If the plot has a familiar ring, you might have seen the movie “The Inspector General,” in which Danny Kaye plays a buffoon who pretends to be a visiting bureaucrat in an Eastern European village. There’s also a play, “Inspecting Carol,” about an actor who comes to audition for a community theater production of “A Christmas Carol” and is mistaken for a representative from the National Endowment of the Arts evaluating them for an NEA grant. Ensemble-written by Daniel Sullivan and his Seattle Rep cohort, it is a hoot!)