Anyone who does not believe truth is stranger than fiction hasn’t been following the news lately…or has never heard about Joe Monaghan, whose story is encapsulated in the playbill of Two River Theater Company’s “The Ballad of Little Jo.” The relatively short article is an absorbing read about the real-life fellow whose life is fictionalized in the musical play, in turn adapted from director/screenwriter Maggie Greenwood’s widely praised 1993 movie.

Okay, the ‘fellow’ tag is a tease. Joe Monaghan was a woman.

While her actual background and motivation are speculative, it is believed that she was eastern debutante Josephine Monaghan, who was disowned after having a child out of wedlock. She left the baby with her sister and fled to the American west, where she learned that the only way to survive on her own was to pretend to be a man. The film assumes that scenario, as does the musical. 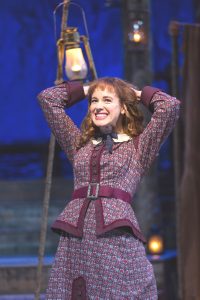 The play begins, after a graveside tableau to which it returns at the end, in 1872, with Josephine leaving Boston for the “promised land” of San Francisco, where “Irish are welcome.” After giving away her train ticket to a destitute young mother en route and enduring an assault on the trail, she ends up in Silver City (in what becomes Idaho), disguised as a man. Jo, now Joe, is soon accepted by the townspeople and becomes part of their silver-mining and social world.

The score, by Mike Reid (music) and Sarah Schlesinger (lyrics), who also devised the book, which Two River’s artistic director John Dias further developed, is studded with angsty, revealing solos. “Far from Home,” “When You Love Someone” and “Troubled Heart” are true to their titles and nicely sung, with some twangier numbers welcome mood-lifters. One of the latter, “Independence,” set on July 4, 1896, is a celebration of Idaho’s statehood. It’s also an effective way to jump the story ahead 18 years, when Joe has become co-owner of a general store and relationships have solidified – or not. 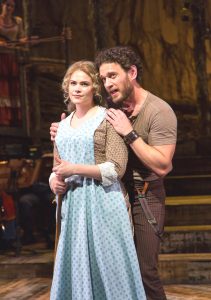 The performances are excellent (a signature feature of Two River productions). Teal Wicks establishes the utterly feminine Josephine in early scenes and is no less believable later on – and throughout – as Joe. Studying studly, pick-wielding Jordan (Eric William Morris) in order to ape his masculine postures, is a high point. “Muscle and Sweat,” Jo/Joe sings, in counterpoint to his largely spoken part in the song. Jordan and his sweetheart Sara (Jane Bruce) are central to the situation; both accomplished singer-actors, they portray their characters’ conflicted feelings unerringly – also toward Joe/Jo, who completes an awkward triangle (think “Twelfth Night”). 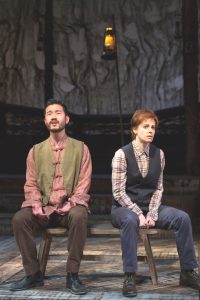 Daniel K. Isaac plays the itinerant Chinese laborer whom Joe takes in as a housemate after he’s beaten-up by the out-of-work miners. Much like TV’s “Kung Fu” Caine, Tin Man Wong (I didn’t make that up) speaks softly and carries many an aphorism. One, “Listen to the Rain,” is nicely sung by Isaac.

Director John Dias ties it all together with a knowing hand (he wrote much of the dialogue, after all). The second act is a slow-moving hour, but the evolving relationships hold interest.

Taking artistic liberties with history is fair game and quite common. Sometimes, however, it can be perplexing. The real-life Josephine’s deception lasted more than 35 years, until her death in 1904. That death, from pneumonia, is represented in the movie, but the stage musical portrays a different cause of death that is jarring and undermines much of what went before. Alas, fake news where you’d least expect it.

The nannies that come to Cherry Tree Lane don’t stay for long.

By turn-of-the-Century (19th into 20th) standards, ‘tweeners Jane and Michael Banks are regular hellions. They’ve driven off their latest nanny by putting frogs in her bedding, among other pranks, and their mother is at her wit’s end. “I’m bereft, dear,” she sings to her husband George. “Another nanny’s left, dear.” Where is perturbed mother to turn? Certainly not to father, whose relationship with the children (and wife) is, at best, distant. The Banks household is in a dither! 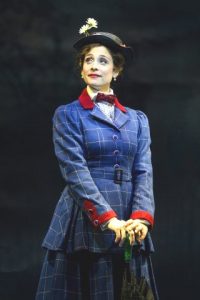 Then who should appear to save the day but a new nanny, ready and able to take charge. “I’m Mary Poppins,” she announces, popping those p’s as if instructing the Banks family (quick learners all). In the ensuing nearly three hours (including intermission), Mary tames the children without dampening their spirit; humanizes father into showing affection; and, after mother endures some hard-to-witness put-downs, elicits her latent feminism.

With her parrot-head brolly and bottomless carpet bag, Mary Poppins debuted in the first of Australian-born Pamela Lyndon (P.L. for gender neutrality) Travers’s eight books about her in 1934. She was further immortalized by Julie Andrews in the 1964 Disney movie and then on stage in the 2004 London musical that opened on Broadway in 2006, logging 2,619 performances over six-plus years. The musical is more faithful to the serious aspects of the books than was the feel-good movie.

Paper Mill Playhouse’s is an attention-to-detail, by-the-book production that hits all its marks. Elena Shaddow’s Mary is oh-so proper, with a dash of sarcasm to indicate her self-confidence (she is “Practically Perfect,” after all). She disciplines the children with a gentle hand – “A Spoonful of Sugar,” you might say. 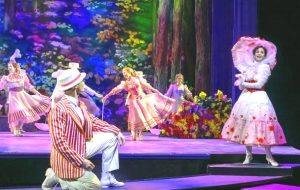 Nanny’s Day off: with Bert in the park

Mark Evans is London street artist and sometime chimney sweep Bert, Mary’s platonic partner in all things magical (“Chim Chim Cher-ee”). Their delightful scene in the park (“Jolly Holiday”) is highlighted by Jack Sippel, as an unexpected visitor from long ago (very long ago).

Jill Paice and Adam Monley are fine as the put-upon mother (“Being Mrs. Banks”) and stern father (“A Man Has Dreams”). Two pairs of youngsters share the roles of Jane and Michael Banks. Madi Shaer and Maddox Padgett, whom I saw, are quite good in those major roles.

Paper Mill does not skimp on ensemble casting (20-plus) or musicians (16), and their combined efforts make the intricately directed (Mark S. Hoebee) and choreographed (Denis Jones) extravaganza “Supercaliffragilistic….” (you know the rest) worth the price of admission. I recommend this “Mary Poppins” for ages seven to…no upper limit. (And, oh yes, Flying by Foy is among the title-page credits. Not to worry.)