Half-way to ’18 already! My goodness, where did the time go?

With the year nearly half spent, some random observations before leaving for Ontario to cover the Stratford and Shaw Festivals for Digital First Media newspapers in Michigan (and online) and for MC2, the Canadian National Mensa magazine. So…a few observations from first half of 2017:

Much ado about very little: The Public’s free Shakespeare in Central Park’s production of “Julius Caesar,” condemned and cut off financially by folks who probably didn’t see it (and interrupted mid-scene by one zealot) was not a particularly outstanding production of that play. As in most others I’ve seen, the final third (after the orations) was a heavy sit-through. The principals were well cast and acted, with Elizabeth Marvel most interesting as Marc Antony, despite portions of her Friends, Romans, Countrymen speech being overpowered by a distracting, wandering, undisciplined horde of supernumeraries. As for the Trump-like Caesar flap: as my colleague Charles Gross pointed out, Caesar actually resembled Bill Clinton as much as he did Trump. And, you’ll recall, the misguided conspirators all end up dead, some by their own hands. Shakespeare knew: Assassination does not pay.

Best Broadway musical adapted from a movie: With intricate jig-saw-puzzle staging and a terrific performance by Andy Karl, “Groundhog Day” is a worthy evocation of the classic film.

Best play seen twice: “The Little Foxes,” once with Laura Linney as Regina and Cynthia Nixon as Birdie, and once with the reverse casting. Of the four excellent performances, Nixon’s emotionally devastating Birdie tops the chart. 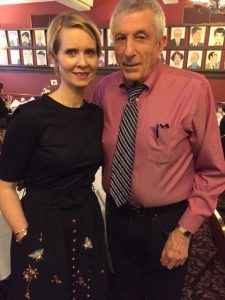 With Cynthia Nixon at the Drama Desk nominees reception

Unexpected Tony Award upsets: Two of my best-bet selections came up short. Danny DeVito lost Featured Actor in Play to Michael Aronov (“Oslo”), and Jenn Colella was bested as Featured Actress in Musical by Rachel Bay Jones (“Dear Evan Hansen”). DeVito and Colella each won at Drama Desk and Outer Critics Circle Awards, both voted by theater critics, which Tony is not. Correctly predicting 18 of the 24 Awards did earn me second place (a complimentary dining certificate) in the ETC/ETC restaurant pool.

Favorite theater-going companion: A first-place tie between granddaughter Carolina, age 13, who joined me for “Come From Away” in March, and her brother Sam, 10, who accompanied me to “Cirque du Soliel Paramour” in February. (I suspect they’ll tie in this category again…and again.) 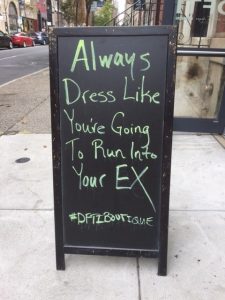 Best Broadway musical adapted from a movie: With intricate jig-saw-puzzle staging and a terrific performance by Andy Karl, “Groundhog Day” is a worthy successor to the classic film.

Best Shakespeare and Shaw plays: Looking ahead a week on these picks. Two of six plays scheduled at Stratford are Shakespeare’s “Romeo & Juliet” and “Twelfth Night” and two of four at The Shaw are his “Saint Joan” and “Androcles and the Lion.” A labor of love for sure. More on these plays anon…