There’s a lot to love in “Ernest Shackleton Loves Me”

The set for “Ernest Shackleton Loves Me” features a metal-frame stand-up desk upon which set microphones, a tape deck, amps and speakers, various other electronic devices and, oh yes, a set of bongo drums hanging on a side pole. It’s like an elaborate DJ platform. “This looks like fun already,” I thought as I walked in. Little did I envision how much fun this 90-minute musical adventure would be, how creative, how rhythmic, how engrossing, how downright wonderful.

With a book by Tony Award winner Joe DiPietro (“Memphis”), music by Brendan Milburn, “a stay-at-home dad who also writes songs” (great priorities), and lyrics by GrooveLily’s brilliant electro-violinist Val Vigoda, the piece is essentially a rock opera within a rock opera that works on both levels. 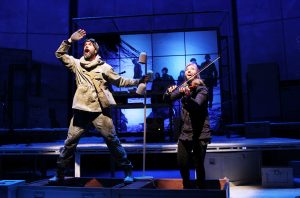 Kat (Vigoda) is a stressed-out Brooklyn single mom (the father is touring with a Journey cover band) who composes video-game backup music. Seeing and hearing her laying down and overdubbing multiple tracks is a show in itself. At one point she accesses a whole orchestra, section by section. Electronic music has never sounded so live. With complimentary projections on the stage’s wide back wall, it is mesmerizing.

After a while, defying space and time, Ernest Shackleton gives her a ringup. Yes, that Ernest Shackleton, who led the famous almost-made-it expedition to the South Pole 100 years ago. (Don’t question it, okay? She also gets a flirty call from Ponce de Leon and one from Jacques Cousteau, but that one’s a wrong number.) She and Shackleton Skype, which we see on the screen and, inspired by her music, he convinces her to join his polar exploration. (He and his crew’s rousing sea shanty helps his cause.) In a state of wonder, she Googles him, with the resultant authentic footage and photos projected on the rear screen. It’s a smart, swift and entertaining history lesson. (I’m now your go-to Shackleton guy.) Shackleton (Wade McCollum) finally appears in the flesh, entering from (not telling), and the two are off on their – and our – adventure. 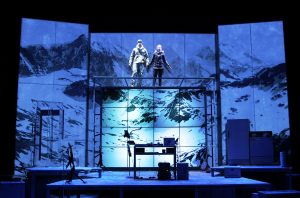 TOP OF THE WORLD! (or bottom)

What follows is a visual recreation of the expedition of 1914-17, with those evocative projected images and a ready supply of spirited vocal and instrumental gems. Kat proves as intrepid an adventurer as Ms. Vigoda is a musician; the duets with McCollum’s Shackleton (who brought his banjo along) are exhilarating.

There’s a message embedded in this rare combination of music, adventure, romance, fantasy and green screen technology: Whether your challenge is reaching the South Pole come what may or creating electronic installations that go largely unappreciated, you gotta’ “be your own freakin’ beacon of hope.”  Embodied by two charismatic performers and vividly directed by Lisa Peterson, this intrepid explorer and struggling Brooklyn composer inspire each other to do just that. I loved being on the journey with them. You will too.

There’s a Playbill credit for Ryan O’Connell: Music Director, Orchestrations and Additional Music. He takes an on-screen curtain call, seated at a keyboard. His coordination between the live and electronic instrumentation is genius, but if all he did was “conduct” the chase music that sends you out of the theater on a high, he’d more than earn his keep.