Drama of an “American Son” at George Street Playhouse

“American Son” is an intense, racially-charged, cautionary tale in which the title character hovers over every minute but does not appear in person. The play is set at 4AM in the waiting room of a Miami-Dade County police station, where Kendra Ellis-Connor is waiting for information about her eighteen-year-old son Jamal, whom she had reported missing the previous day. Jamal had left home in his late-model Lexus, a gift from his father, and had not checked in or answered his cell phone. Mom is deeply concerned, a state of mind conveyed in Suzzanne Douglas’s performance before she speaks a word.

White police Officer Paul Larkin (Kendra and Jamal are black) is pleasant with her, if a bit awkward and insensitive to racial “coding,” as when he points out that the old building has two water fountains side-by-side in the hallway. He’s also evasive: “There’s been an incident,” he says. “A pending investigation.” Mark Junek acts the rookie officer very well, straddling his mix of officiousness (“We have our protocol”) and compassion (“I’ll see what shows up in our system”). He’s good-cop and bad-cop rolled into one.

No one is more surprised than Officer Larkin when Jamal’s father, Kendra’s estranged husband, shows up: he’s a white man who happens to be an FBI agent (or vice versa). Tension between the separated spouses makes up the core of the play, with details about their marriage, their racial attitudes and particularly their parenting techniques spilling out. John Bolger finds humanity in the rigid fellow (FBI, after all). A violent outburst is also very much in character. 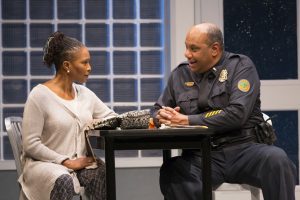 …and with Mark Kenneth Smaltz.

The fourth character to appear is Police Lieutenant Stokes, whose job it is to take charge of the situation; Mark Kenneth Smaltz accomplishes that with professionalism – actor and character both.

The Anguished Mother is something of a stock character, but Ms. Douglas liberates this one from melodrama. To be sure, there is repetition and stating of the obvious in Christopher Demos-Brown’s text, but as directed by David Saint and performed by four fine actors, the play rises above others of its ilk. The implicit message of “American Son” may not be new, but unfortunately it remains necessary. Questions about youthful rebellion in the context of racial identity are raised. No less a personage than Barack Obama has weighed in on the problems facing African-American parents. The fact that definitive answers elude the “American Son” characters is hardly a knock on the play. On the contrary, too few plays offer as much substance on crucial social matters.  As for what happens with Jamal Connor, that is revealed at the end when Lt. Stokes announces “I’ve got news.”