Take the A (for Any) Train to “In Transit”

The last time I walked by the TKTS booth on Time Square at 47th Street, 22 Broadway shows were offering same-day discounted tickets, most for half-price plus a two dollar service charge. Several have since closed, but in relatively low-attendance January and February, it’s a Broadway-bargain- hunters’ market.

Except for “Wicked,” which surpassed a billion-dollars all-time in December and the Disney perennials “Lion King” and “Aladdin” and (duh) “Hamilton”, pretty much every other Broadway show will be available over the next six weeks. Long-running musicals (plays are shorter-lived) that are still worth catching include “Beautiful: The Carole King Musical,” “Kinky Boots,” “The Book of Mormon” and “School of Rock,” all favorably reviewed. (My ‘tween granddaughter loved “Rock”;  “Mormon” is adult fare.)

A musical that seems to have settled under the radar after opening in December is not only new, but also very different. Sans orchestra or band, or, in fact, any musical accompaniment at all, the proudly a Capella “In Transit” is nonetheless possessed of some delightful music, sung in tight, tight harmony by characters in a half-dozen separate-but-equal NYC vignettes. 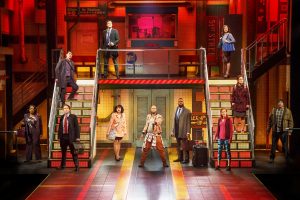 As in the movie “Love Actually,” which “In Transit” resembles in form, the several stories don’t interlock, except that portions of each are set in a subway station or on a train. None of the threads is particularly original, but the fresh-faced (and diverse) cast’s eagerness and their superb close harmonies, tossed off with deceptive ease, more than compensate for their stereotypical characters.

One cliché that hits the mark is the wry, street-wise subway booth attendant, played by Moya Angela, who also plays the fundamentalist mother of Trent (Justin Guarini), whose wedding to Steven (Telly Leung) is on hold, pending mom’s acceptance. Another thread has Ali (Erin Mackey) working off her heartbreak by training for a marathon run after being dumped by Dave (David Abeles). 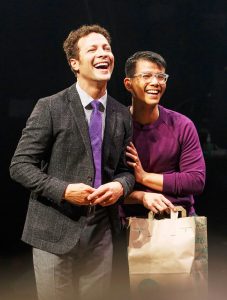 Jane (Margo Seibert) is an actress whose office day job is “doing what I really don’t do so I can do what I do do.” She and a recently down-sized Wall Streeter meet – where else? – in a subway station. “But, Ya Know” is their discovery duet, composed, as is the entire swingy score (and the book), by committee: Kristen Anderson-Lopez, James-Allen Ford, Russ Kaplan and Sara Wordsworth. Fortunately for the finished product, the estimable Kathleen Marshall handles choreography and direction solo. She keeps “In Transit” in constant motion, not unlike the NYC Subway system. 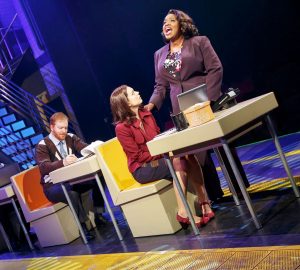 Margo Seibert, center, as actress Jane at her ‘day job’ with David Abeles and Moya Angela

There is one “accompaniment” to the vocals, in the person of Boxman, a dude whose throaty, amped-up sound effects create a virtual percussion section. Played alternately by Chesney Snow, whom I saw, and Steven “HeaveN” Cantor, Boxman also offers knowing observations on the passing scene. (You’ll swear you’ve seen him busking underground.)

You might not leave “In Transit” humming the tunes, but you’ll long remember how a string, a brass and a woodwind section were created before your very ears by a Capella arranger Deke Sharon and a vibrant gaggle of Broadway voices.