A Tempest at Two River: “Hurricane Diane” in Red Bank

If you wished to come back as a Greco-Roman God, you could do far worse than to opt for Dionysus (Greek), also known as Bacchus (Roman), the god of wine, fertility and agriculture as well as the patron god of the Greek stage. He was also able to bring a dead person back to life, which would make you a sought-after dinner-party guest (or a shunned one). You’d also have a couple of plays written about you: “the Bacchae,” written by Greek dramatist Euripides in the BCE year 407, and Madeleine George’s “Hurricane Diane,” which premiered last week at Two River Theater. (That’s 2424 years later, if you’re counting.)

Among other endeavors, Dionysus, son of Zeus (and an ill-fated mom), headed a cult of wine-imbibing women who promoted the natural cultivation of grapevines and other flora, an activity that, for reasons best left to Ancient Historians, sometimes led to orgiastic ritualistic displays.

Why that history capsule, you ask? Because, after adjustments to time, place and gender, that’s what happens in “Hurricane Diane,” in which playwright George, to quote Two River’s own blurb, “…turns the Greek god Dionysus into Diane (Becca Blackwell), a lesbian separatist permaculture gardener from Vermont whose mission is restoring the Earth to its natural state—and gathering acolytes…in a tidy suburban cul-de-sac in Red Bank, New Jersey.” (The actor Blackwell is an acknowledged trans individual who “exists between genders” and who prefers the pronoun “they” to “he” or “she.” Since they is playing a character identified as female, we’ll refer to Diane as “she and “her,” to the relief of our grammatical Word program.) 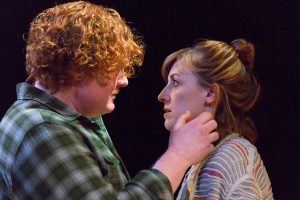 “I have returned,” Diane announces. “The god of agriculture, wine and song; my time is now.” Well, not quite. While she does eventually gather acolytes – three of four of those Red Bank householders – her free-range vegetation (overgrowth and paw-paw trees) is no match for middle-class landscaping (trimmed lawns and a wrought-iron bench). 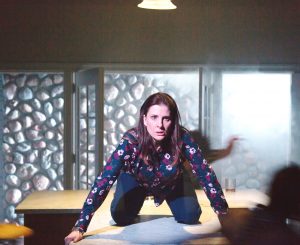 It’s not for lack of trying, and the four women she encounters make Ms. George’s play an agreeable ninety-minute sit-through. Sandy (Mia Barron) is a drug-company compliance officer who has rationalized her products’ nasty side effects and who stands her ground against Diane’s agricultural (and other) advances. Beth (Kate Wetherhead), last-named Wann, is just that (single n) – a needy woman who succumbs to both of the seductions that Sandy resists. 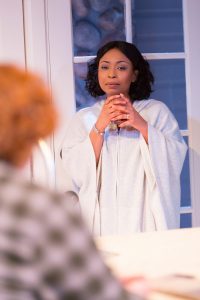 Renee (Nikiya Mathis) writes for a traditional House and Garden type magazine; her resistance to the Asimini Triloba (ahem, paw-paw) is short-lived also. Fourth but not least is Pam Annunziata, who exemplifies the Staten Island émigré to Jersey in appearance, attitude and sharp-tongued retort, qualities that Danielle Skraastad grabs hold of and runs with. 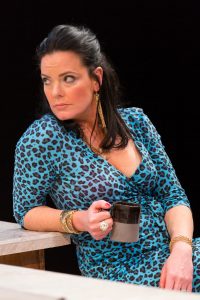 So-called ‘chemistry’ among actors is hard to define, but I know it when I see it, and it is very much in evidence when the four cul de sac neighbors are schmoozing with one another (on designer Rachel Hauck’s efficient kitchen set). Eavesdropping on their convos is a fly-on-the-wall experience, and while their husbands do not appear in the flesh, their personalities and – oh, yeah – their sex-frequency is an open book. The all-femme team of playwright George, director Leigh Silverman and the actors are a formidable sextet.

I am less enthusiastic about some of the play’s other elements. Diane herself is less than dynamic; Blackwell plays her with a laconic, condescending attitude. And the message, which I’ll summarize as eco-conscious, isn’t made any clearer by its amorphous connection to Dionysus. The frenzied display that parallels the Grecian rituals goes on way too long, although the dystopian image that’s accomplished in total blackness on the Huber Theater’s floor-level stage (Two River’s second space) is impressive.

Ms. George has been named Two River Theater’s Playwright-in-Residence. This is her second play to premier there; the first was “Seven Homeless Mammoths Wander New England” in 2011. That intriguingly titled play did not directly involve a Greco-Roman god, although one character was pointedly named Andromeda. At six-year intervals that gives me plenty of time to bone up on Virgil’s Aeneid.