“A Bronx Tale: The Musical” on Broadway

Crafted by Chazz Palminteri from a true story from his 1960s youth, “A Bronx Tale” originated as his one-man show in 1989 (revived on Broadway in 2007, directed by Jerry Zaks). The 1993 film version starred Palminteri as neighborhood gangster Sonny, who took young Chazz under his wing, and Robert De Niro, who also directed the film, as Chazz’s working-class father.

Now, in addition to relating his story on stage and seeing it portrayed on the screen, Chazz can also hum its tunes: “A Bronx Tale: The Musical” has opened on Broadway (following its shakedown run at Paper Mill Playhouse in NJ). In this era of movies-to-musicals, this one stands out. Palminteri’s own-authored book is supported by a creative dream team: music by Alan Menken (“Little Shop,” “Beauty and the Beast”), lyrics by Glenn Slater (“School of Rock,” Little Mermaid”) and direction by the tandem of De Niro and Zaks. The basic material dates from 1989 (and is set 25 years earlier), but the musical is anything but stale; it’s a fresh take on a bygone era, a characteristic it shares with a certain mega-hit, just with doo-wop, not hip-hop.

Nine-year old Calogero witnesses a murder in front of his tenement. When he doesn’t finger local gangster Sonny in a police lineup, a bond is formed between Sonny and “C,” as he dubs Calogero. C’s bus-driver father tries to discourage the relationship, but the pull of street-life is irresistible. 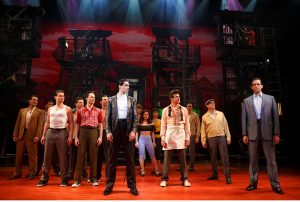 A parallel story line involves teen-age C’s budding romance with Jane, an African-American girl from his high school. The musical does not shy away from the virulent racism that permeated their separate neighborhoods, but their relationship emerges as a sweet one, however short-lived. It also inspires an unexpected character revelation when Sonny advises C that Jane might be “One of the Great Ones.” That song says more about Sonny than about C or Jane, and Nick Cordero aces it. Sonny is the flip side of the comic heavy that earned Cordero multiple awards in Woody Allen’s “Bullets Over Broadway,” and the actor makes it look easy. Every bit the ‘made-man,’ his Sonny is scary and inviting at the same time.

While Cordero presides over the show, he’s more than ably assisted by Richard H. Blake and Lucia Giannetta, who bring depth to what could be the stock characters of C’s parents; by Bobby Conte Thornton and Ariana De Bose as the teen-aged C and his would-be girlfriend; and by Hudson Loverro, who dominates the opening scenes as nine-year old Calogero (and who personifies W. C. Fields’s advice against acting with children). 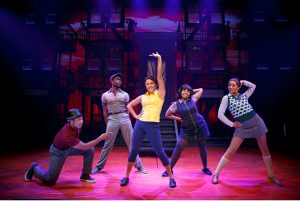 Beowulf Boritt’s set, featuring four skeleton-frame towers, has an authentic tenement-neighborhood feel; choreographer Sergio Trujillo takes advantage of its levels and crannies. Some of teen-C’s expository narration is labored, and the conclusion might be overly sentimental, but these are minor complaints in an overall entertaining musical. Which director most influenced what elements remains a mystery, but between De Niro and Zaks, “A Bronx Tale” covers all the stagecraft bases.

Speaking of Paper Mill Playhouse, where “Bronx” originated (as did “Newsies”and the 25th Anniversary “Les Miz”), the less said about their latest movie-to-stage offering the better. “The Bodyguard: The Musical” is so poorly conceived, staged and acted as to be laughable. I did not see the movie, which film critic Leonard Maltin labeled an “overblown star vehicle,” but what a baker’s dozen designers, directors and choreographers hath wrought from Lawrence Kasdan’s screenplay amounts to cruel and unusual punishment. 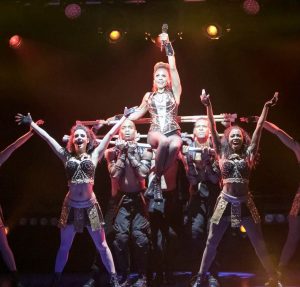 Deborah Cox is Rachel Maddon in “The Bodyguard: The Musical”

In the Whitney Houston role as the singing star in need of protection, Deborah Cox punches out her songs well enough, although none save the Dolly Parton-composed “”I Will Always Love You” is memorable, but an actress Ms. Cox is not. And could Kevin Costner have been as lethargic in the title role as is Judson Mills at Paper Mill? He sleepwalks through his every scene. All considered, however, you may want to see this show if, like me, you also saw the musicals “Portofino” and “Royal Flush.” To round out a trifecta.

Then there’s the Broadway revival of “The Front Page,” Ben Hecht and Charles Macarthur’s 1928 comedy about competitive newspapermen reporting on an impending hanging and the condemned man’s last-minute escape. Sounds, dire, yes; but it is a full-blown comedy – with a cast of Broadway luminaries headed by Nathan Lane and including John Slattery, John Goodman, Sherie Rene Scott, Robert Morse and another half dozen familiar faces. 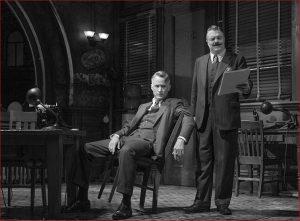 John Slattery, seated, and Nathan Lane in “The Front Page”

In a nutshell: Until Nathan Lane’s character shows up, two-thirds through the second act (of three), the play is an accurate recreation of how such fast-paced comedies played in the 1920s. As such it is interesting…fascinating even, with quite a few laughs along the way.

Once Nathan Lane enters, the play becomes even more fascinating – and gut-busting funny! The man gets more from a well-timed pause than most actors get from a punch line, and if you don’t think the word “pulley” is funny just because it is, you haven’t heard him declaim it. Abetted by top-notch character actors (most notably Mr. Slattery), Nathan Lane is reason enough to see “The Front Page”.