“The Lion in Winter” Heats Up Two River Theater

Set over Christmas Eve and Day in the year 1183, “The Lion in Winter” is based on events in the lives of seven historical figures: Henry II, King of England, Scotland, Wales, etc.; his Queen-wife-prisoner Eleanor, late of Aquitaine; their three sons; Henry’s mistress Alais; and Alais’s brother Philip, King of France. Real people, yes; but it’s not a history lesson. “The people,” wrote James Goldman in the preface to his play, “while consistent with the facts we have, are fictions.” In that context, concocted as it is out of fact, rumor and inference, “The Lion in Winter” is a flavorsome entree, served up in a thoroughly engrossing staging at Two River Theater in Red Bank, NJ.

Written 60 years ago and set eight Centuries earlier, neither its style nor its setting is stale. Its “anachronisms in speech, thought, habit, custom and so on…are deliberate” (Goldman again), and the concept of a family squabbling (or worse) over mulled wine at Christmas might just as well be next month as 800 years ago. King Henry (Michael Cumpsty) to Queen Eleanor (Dee Hoty): Well – what shall we hang? The holly or each other?

At age 50, long-lived for that time, Henry (Michael Cumpsty) is concerned over the succession to his throne. His anointed first-born having died, he now wants to designate youngest son John (Noah Averbach-Katz), despite the 16-year old lad’s overall awkwardness (an understated assessment). Eleanor (Dee Hoty), released from confinement for the Holiday (she had plotted against Henry earlier), favors eldest son Richard (KeiLyn Durrel Jones), which leaves Geoffrey (Hubert Point-Du Jour) in limbo. “There’s no affection for me here,” Geoff laments, in a middle-child whine. (What else is new?)

Toss Henry’s mistress Alais (Madeleine Rogers), who will be wedded Queen to whichever son (Oh, those Royals!), and her King-of-France brother (Ronald Peet) into the mix, and the recipe for familial dysfunction is complete. 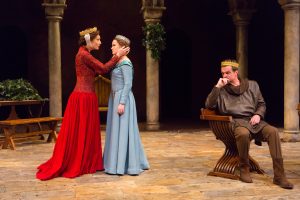 No less an authority on acting than Lord Laurence Olivier said “Talent is plentiful; skill rare.” While we might quibble that first assertion, the second is a given, and nowhere does it apply more than in the performances of Michael Cumpsty and Dee Hoty. Throughout, Henry and Eleanor express anger, distrust, jealousy and even murderous intentions toward each other – all amid declarations of undying devotion, including a hinted-at conjugal diversion during Eleanor’s parole. Cumpsty and Hoty enact all those elements, not just in succession, but, it seems at times, simultaneously. Acted to perfection, Goldman’s power-pair are the original Frenemies. And no one betters Cumpsty at mining the humor in dramatic characters and situations, a skill much in evidence here.

Their triangle is completed by Alais, raised by Eleanor from age seven and Henry’s lover from sixteen (an R-rated play, this). Now 23, she is both vulnerable and intuitive. Rogers’ sensitive performance (in an interestingly-written role) is a window into what it must have been like to be a pawn in a game coldly played by Kings and Queens. 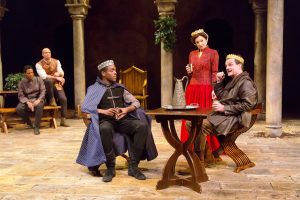 If the pace falters a bit in scenes where those three are absent, it is a fault shared by the play and the players. None of the sons gets much below the surface, but their function is more to serve their parents’ machinations than to flesh out their own characters, although they do impress in a late scene in the wine cellar. The French King, 33 years Henry’s junior at age 17, bristles at Henry’s repeatedly calling him “boy.” Casting a Black actor adds an extra frisson of tension to Ronald Peet’s respectable performance.

Besides her exemplary staging and some intuitive character etching, director Tyne Rafaeli’s subtle touches illuminate the piece. The script calls for Henry to arrange a wisp of Alais’s hair, for example. “Let’s have one strand askew,” he says. “Nothing in life has any business being perfect.” Later, Eleanor, unprompted by the playwright, adjusts the stray wisp back to its constraint. I’m attributing that telling bit of business to the director. Maybe not, of course; I’ve been wrong before. Nothing in life has any business being perfect.