Have you ever seen Othello played by a Caucasian actor? I’ve seen Orson Welles’s and Laurence Olivier’s “blacked-up” film versions, and Pavarotti singing the Verdi operatic role at Carnegie Hall years ago, but never a white Moor on stage. (My first Othello was James Earl Jones in Central Park in 1964.)

Neither had I ever heard of American-born Ira Aldridge, the first black actor to play the role on a London stage, until Red Velvet. Veteran British stage and screen actress Lolita Chakrabarti’s first-written play, on stage now at the Shakespeare Theatre of New Jersey, is about the hiring of Aldridge to replace Edmund Kean in the role after Kean had collapsed during a performance at Covent Garden in March 1833. (He died two months later.)

The ensuing reactions to Aldridge’s appearance among the production participants, the public and the critics (some of them vile), is a fascinating tale, made more so by the fact that it occurred three decades before our Emancipation Proclamation (although England officially abolished slavery that same year, 1833).

Ira Aldridge (Lindsay Smiling) was already a well-known actor and interpreter of Shakespeare, including Othello, in all-black theater companies, but to play in a “white” venue opposite a white actress with whom there would be physical contact (the Moor strangles Desdemona, you’ll recall), was unheard of. Nonetheless, actress Ellen Tree (Victoria Mack) welcomed Aldridge into the company. 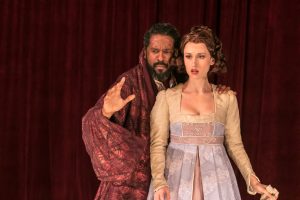 Smiling and Mack actually played Othello and Desdemona at NJ Shakespeare in 2011; they are a formidable acting pair. Their scenes together, in and out of the Shakespeare, are captivating. That Aldridge’s presence excites Tree (on stage and, ever so subtly, off) is tingling to witness, and his defenses-down acceptance of her acting suggestions is character-defining in itself.

For a fact-based play with real-named characters, dates, newspaper quotes and such, Red Velvet holds up as a dramatic piece. The Iago actor’s antipathy toward Aldridge is well documented; he was, after all, Edmund Kean’s son Charles, played here with an appropriate hard edge by David Andrew Macdonald. David Foubert’s portrayal of the well-intentioned Covent Garden manager is a sympathetic one, even as he succumbs to racial, social and financial pressure. Others who impress include Shannon Harris as the black maid who stands by silently…until she speaks up; and Sofia Jean Gomez, excellent in a historically accurate role that comes as something of a surprise. 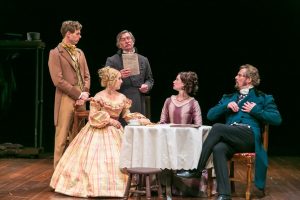 The play is framed as a flashback, book-ended by scenes in a dressing room in Poland, in 1867, with Aldridge being interviewed by an awkward rookie reporter, also played by Ms. Gomez, whose closing-scene monologue is delivered perfectly. Against that monologue, Aldridge sits at his make-up table, preparing to go on – not as Othello, alas. Mr. Smiling expresses volumes through Aldridge’s resigned silence. It is hardly a cheery ending, but as directed by Bonnie J. Monte into a seamless blend of actorly behavior, 19th Century racial attitudes (disturbingly familiar, need one say),  and a smattering of Shakespeare, Red Velvet is a satisfying, immersive experience.

Remarking to one of his children on the size of their family, Frank (Dad) Gilbreth says “I thought anything Mother and I teamed up on would be a success.” That’s as racy it gets in Cheaper By the Dozen, Christopher Sergel’s stage adaptation of the book by the real-life Gilbreth siblings Frank Jr. and Ernestine Gilbreth Carey, and the the 1950 movie with Clifton Webb and Myrna Loy. (Two later re-makes with totally different plots failed to capture any of the original’s charm, despite the presence of Steve Martin.) 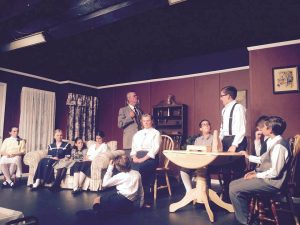 The cast of “Cheaper By the Dozen”

The play, which features nine Gilbreth children from ages 17 down to about six (three are asleep upstairs – the same three throughout, which casting directors must appreciate), is unlikely to be mounted anywhere except at community theaters where parents are willing to chauffer the kids to rehearsals…and where a director is able to wrangle them into a coherent performance. Based on the youngsters having showed up and on a smooth production, First Avenue Playhouse fills the bill on both counts. Under Gina Shuster’s obviously caring direction, the kids hit their marks and talk their talk. Some of the content in conversations that introduce each act is lost to rapid kid-speak, but overall the exchanges are clear and – no small compliment – well timed.

Efficiency expert Gilbreth (David Clark) brings his techniques into the home, installing, for example, Victrolas (did I mention it’s the 1920s?) in the children’s’ bathrooms to play language lessons during tooth-brushing. (The girls get French and the boys German.) Clarke tempers Frank’s stern exterior with paternal love and concern (without which the play would bomb), and Antje Weymann is just right as Mrs. G, nicknamed “boss” by her husband with good cause. (The real-life Mrs. G held a PhD from Brown!)

The plot revolves around the conflict between the eldest daughter and her father. Seventeen-year-old Anne, extremely well-acted by Red Bank Catholic High School senior Amara Shroba, morphs from an immature kid to a self-confident young woman (who, btw, wears the period fashions with the aplomb of a Vogue model). 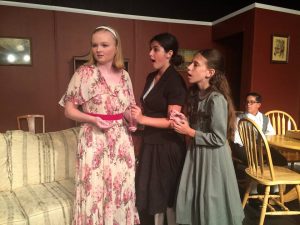 A strong point of the production is the relationship between Anne and her two younger sisters, who support her maturing instincts. Played with spirit and humor by Rebecca Remelgado and Danielle Pecchioli, they and Ms. Shroba relate like…well, like sisters.

In the book and movie, Frank Sr. dies and Mother assumes his role in the family. (The real Frank Gilbreth died of a heart attack in 1924 at age 55.) Except for brief hints, the stage adaptation downplays his mortality, opting instead to have him accept a distant work assignment, presumably to mollify community casts and audiences. No harm, no foul.