“To Kill a Mockingbird” at Holmdel Theatre Company

Published in 1960, Harper Lee’s semi-autobiographical To Kill a Mockingbird is one of the most revered American novels of all time, and the 1962 movie is one of the best book-to-films ever made. Christopher Sergel’s redundant stage adaptation premiered at Paper Mill Playhouse in New Jersey in 1991, going on to be widely produced in Regional and community theaters as well as in high schools, where it was, in fact, intended.

The novel was awarded the Pulitzer Prize for fiction and the movie won multiple Oscars, including Best Picture. The play’s dialogue is mostly lifted from the source(s), and it falls back on periodic narration, as did the film (voiced by Kim Stanley), a device which, on stage, impedes continuity.  Its community theater popularity is fostered by nostalgia and by its box office appeal. By and large, Holmdel audiences are getting their money’s worth.

The story is embedded in the American firmament. In a small Alabama town in the 1930s, a white lawyer defends a black man accused of raping a white woman. The outcome of the trial is pre-determined by the racial makeup of the participants; an all-white jury finds the defendant guilty despite clear evidence to the contrary. The emotional center, however, is the effect the widowed lawyer’s actions have on his two children. The first act centers on the family dynamics; the second act shows the trial itself. As vivid as courtroom drama can be, the first is the more satisfying act, as directed and acted at Holmdel. 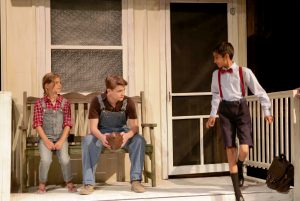 From left: Ceci Lihn (Scout), Will Ehren (Jem) and Aman Tolia (Dill) in “To Kill a Mockingbird” (Photos: Jaye Freeland)

It’s doubtful that Atticus Finch, his daughter Jean Louise ‘Scout’ and his son Jeremy ‘Jem’ have ever seemed more of a family. James Morgan captures Atticus’s moral strength beneath his deceptively docile exterior, a virtue his children come to admire. Will Ehren’s take on Jem is an unusually insightful reflection of adolescent curiosity, energy and angst: a fine example, I aver, of ‘method’ acting. 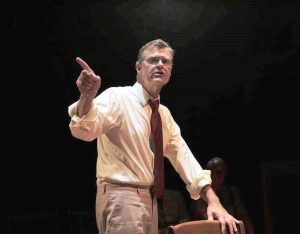 As Scout, Ceci Lihn is a wonder. Exquisitely poised for her – or any – age (she turned nine on opening night), her immersion in the character never wavers and her timing is perfection. “Talent is plentiful,” said Laurence Olivier, “skill rare.” Ceci got plenty of both. (In the book, Scout is “goin’ on seven” and Jem is “four years my elder.” They appear a few years older here, but the proportion is the same.) 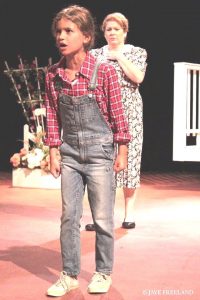 Ceci Lihn as Scout, backed up by Gloria Lamoureux as Miss Maudie 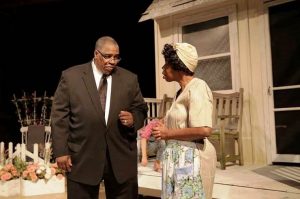 Despite her damning false testimony, Claire Gates’s Mayella Ewell is a sympathetic slattern, obviously abused by her father, played with a perpetual sneer (and a contemptible mouth) by Bill Normyle. And if ever a cameo deserved mention it is Steve Lukawski’s excellent enigmatic Boo Radley.

The play is no substitute for the book, or even the movie, but it is more than just a Cliffs Notes, and Holmdel has done a good job with it.

Directed by Tom Frascatore with equal attention to events and relationships, To Kill a Mockingbird and its characters evolve as they are meant to. Chris Szczerbienski’s minimal set design functions well, until the second act trial scene, where the play is ill-served by the configuration of the courtroom. All of the witness testimony is staged with the actors’ backs to a large portion of the audience. It’s a major gaffe, unfair to the audience as well as to the actors whose faces are not seen. Don’t sit at the narrow end if you can help it. And, not to be construed as a complaint, an alert: the play is riddled through with N-word expletives, no less grating to the ear by virtue of being in context.