The paws that refresh: “CATS” back on Broadway

Has any long-run Broadway show counted as many detractors as has Cats? (Besides Oh, Calcutta! I mean.) Upon hearing that I was attending the Broadway revival, comments from friends and colleagues ranged from mild disdain (“It’s not one of my favorites”), through haughty derision (“It’s touristy kitsch”), to outright loathing (“You couldn’t pay me to sit through that crap”). Well, Cats is not my all-time favorite, and I hardly classify it as high art, but you could (and they did) pay me to sit through it, which I would gladly do again.

The naming of cats is a difficult matter, It isn’t just one of your holiday games;  You may think at first I’m as mad as a hatter/When I tell you, a cat must have three different names.

So begins “The Naming of Cats,” the first poem in T. S. Eliot’s Old Possum’s Book of Practical Cats, upon which the musical is based. The characters are from the poems and nearly all the lyrics to Andrew Lloyd Webber’s more-than-serviceable score are verbatim. Cats had been running in London for 18 months when it opened on Broadway in October, 1982 and went on to run for 18 years. Its 7,485 performances ranks fourth all-time, behind Lloyd Webber’s Phantom, at 12,000; the Chicago revival, approaching ten times the original’s 936; and The Lion King, nearing 8,000. (All three are still running.) 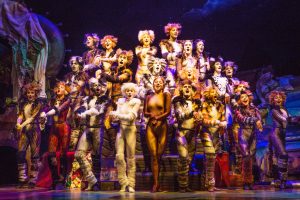 Directed, as was the original, by Trevor Nunn, and with Gillian Flynn’s original choreography re-created/enhanced by Tony Award-winner (for Hamilton) Andy Blankenbuehler, the revival is two hours of tightly disciplined purrrpetual motion. Natasha Katz has taken the original lighting design and run with it; her spectacular results enhance without distracting from the proceedings. Bright cats’ eyes from trash-strewn crevices, multi-colored slashes of light crisscrossing the stage (and occasionally beyond), and bodice-blinking onesies are feasts for the senses. John Napier’s junkyard set extends up the aisles, where various and sundry felines also pussyfoot from time to time.

To be sure, it is the same show, but the fresh 30-member cast of Broadway gypsies ignites it with an up-to-date spark. Cavorting about in exotic kitty-kat costumes and painted-on whiskers is work, not play, but who wouldn’t want to be Rum Tum Tugger or Jennyanydots or Bustopher Jones (The Cat About Town) for a while? Standouts in the terrific ensemble include Jess LeProtto and Shonica Gooden, whose song-and-dance as Mungojerrie and Rumpelteazer is a show-stopper; Rickey Ubeda, who lights up the stage (literally) as Magical Mister Mistoffelees; and the duo of Kim Fauré and Christine Cornish Smith, whose slinky intro of Macavity, the Mystery Cat, is downright pussycat sexy. The whole gang (litter? pride? whatever) also executes a nifty tap-dance number. Who knew?

Cats also catapulted Grizabella’s song “Memory” into the pop-culture stratosphere (along with the original Grizabella, Betty Buckley). The song is hinted at several times during the show before its full-throated rendition by “British singing sensation” Leona Lewis. The song is gorgeous – on its own and as emotionally rendered by Ms. Lewis.

I refer those who dismiss Cats as just entertainment to Anthony Shaffer’s rejoinder to that same critique of his play Sleuth: “What do you mean ‘just’? It’s a bloody sight harder to entertain than to bore.” You will not be bored at Cats; you will be entertained.

A Cat’s entitled to expect/These evidences of respect.  So this is this, and that is that. And there’s how you ad-dress A Cat.

My 12-year-old granddaughter was among the audience members to visit Old Deuteronomy (Quentin Earl Darrington) during intermission.