“Iago” not the only villain at New Jersey Rep

Legend has it that when British producer-actor Sir Donald Wolfit toured as Othello, he was dismayed when Iago got all the notices. He replaced the actor with a less-talented fellow, who also dominated the reviews, and then with the assistant stage manager: no change. By the end of the tour, Wolfit himself was playing the crafty villain and basking in praise for his performance. He could take a hint, old Wolfit could. After all, bad guys tend to be more interesting than good guys; besides, Iago is the larger role (1098 lines to Othello’s 887).

James McLure, who died of cancer in 2011 at age 59, set his last-produced play against a misguided production of Shakespeare’s Othello. In an admired creative stroke, McLure titled his play Iago. Seeing the play at New Jersey Repertory Company, however, brings to mind the time-worn adage: Don’t judge a play by its title.

Iago is as clumsy a play as McLure’s earlier Lone Star and others were adroit. The behavior it would satirize, theatrical egocentricity, is, instead, mocked in a clichéd style that went out long before the time-set of the play (1947-’57) and that even then was written and portrayed by masters of the genre that Iago presumes to invoke. Compounding that villainy (where’s Iago when you need him), it is performed without a trace of irony. Heavy-handed satire is a contradiction in terms. 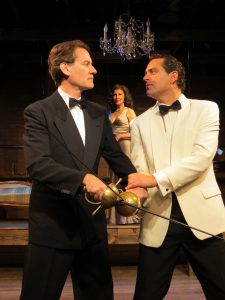 Established stage star Anthony Roland (Ezra Barnes) is playing The Moor opposite his wife Vivacity (Liza Vann)’s Desdemona and the Iago of promising newcomer Peter Finney (Todd Gearhart), who does not regard the character as evil and who is embroiled in an affair with Vivacity. They enact the Shakespearean roles awkwardly, presumably on purpose, but making no apparent effort to temper that ineptitude outside those characters is baffling. John Fitzgibbon fares somewhat better as the Othello director, partly because he gets to comment on how awful the others are, but he too affects a winking, prissy style. (The playwright did them no favor by writing an evaluation of Brando’s acting into the play.) 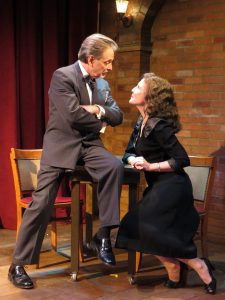 The first act establishes the strained Othello rehearsals and the hanky-panky. Act two, waayyy overlong, includes an over-the-top, flitty Iago impression that sinks bad taste (and worse judgment) to its nadir, before the play switches gears to center on dysfunctional Vivacity’s descent into…well, her descent. Possibly attributable to the late start, neither the character nor the actress is up to carrying the burden, although Ms. Vann was actually pretty good as Desdemona. (At one point Vivacity says “I feel left out.” No wonder.)

NJ Rep Artistic Director SuzAnne Barabas described Iago in a published interview as a “neglected” play. “It was done once or twice many years ago while [McLure] was still living,” Ms. Barabas noted, “and after that it sort of died with him.” If only.

[NJ Rep’s 2014 production of “Butler” just completed an off-Broadway run at the prestigious 59E59 Theatre, where the play received rave reviews, including from the New York Times, and broke that venue’s straight-play box office record, proving that while you can’t win ’em all, you can win some of ’em.]