At Shaw Festival: Wilde, Gilbert and young Alice too!

[As appears in September issue of American Mensa Magazine]

In 1962 a group of Canadians and Americans produced weekend performances of George Bernard Shaw’s Don Juan in Hell and Candida in a Court House hall in Niagara-on-the-Lake, Ontario, Canada. From that modest beginning was born the only Theatre Festival in the world devoted to the plays of Shaw and his contemporaries (and modern plays that reflect Shaw’s values). There could be no better representation of that early mandate than the four plays I saw there recently: one each by Shaw himself, Oscar Wilde, W.S. Gilbert (of Gilbert & Sullivan), and one by Lewis Carroll, via a musical adaptation of Alice in Wonderland.

Their Alice is indeed a wonder of design and execution. The sets, costumes, lighting and rear-wall projections are spectacular and the stylized performances are triumphs of impersonation, with a 22-member cast inhabiting some 70 roles. (One actor plays a sardine, the Caterpillar, the King of Hearts and, um, a lobster.) 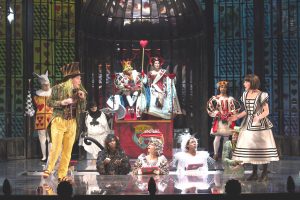 Framed as a story told by Charles Dodgson (Lewis Carroll) to ten-year-old Alice Liddell and her sisters, the Wonderland adventures are respectful of the original (no updated asides, thank you). In the book, Alice “fell very slowly” down the rabbit hole, and so she does here, where she encounters characters – White Rabbit, March Hare, the Queen of Hearts et al – that are as real as the person seated next to you. The book’s irony and deceptive profundity also make the transition from page to stage: “There ought to be a book written about me,” Alice says. And later, “A cat may look at a King.”

Having seen Tara Rosling’s Pygmalion Eliza Dolittle in 2004, it took me a full two minutes to buy her as a ten-year-old. She plays not only Alice’s age, but, through minimal posture and attitude adjustments, the girl’s size changes register as well. It is a remarkable performance.

Alice and the Caterpillar

At two-and-one-half hours, the show might challenge attention spans (of children and adults); several scenes would profit from pruning. That notwithstanding, this Peter Hinton-directed Alice in Wonderland, with 16 original songs and spirited choreography, is a treat.

From director Morris Panych’s program notes: “Engaged is not a well-known play. One would think it would’ve died of neglect. But no, someone with too much time on their hands dusted it off and cracked open its dusty pages. Why? It is hardly relevant these days.” Soon enough, however, Panych counters this heresy by making a good case for staging Engaged. Such period-comedy antics can be tremendously entertaining, he avers. Moreover, they connect us to our forebears’ “beating hearts that beat no longer.” He’s right, but if that’s too highfalutin for you, know this: performed in a carefree style just short of slapstick, the 1877 play is damn funny.

Engaged centers on a wealthy bachelor who proposes marriage to every pretty girl that crosses his path. The opening scene with its nearly unintelligible Scottish brogue had me worried, but soon enough the scene shifts to London, where quips and confusion reign supreme. The men are swooners or oafs, the women conniving or innocent (and gorgeously attired), and the pace doesn’t slacken for two hours. Good, clean (well, a bit naughty) fun. There is a place in the entertainment firmament for inspired silliness, and W. S. Gilbert’s Engaged fills that slot just fine.

An act of violence is committed by one character upon another in Oscar Wilde’s A Woman of No Importance that, while tame by today’s standards, resounds like a thunderbolt in context. Impeccably staged and performed, the act and its aftermath provide as much insight into staid British standards and manners as do some other entire plays. Thinking on it informs my opinion of the whole.

The sophisticated banter at Lady Hunstanton’s house party is vintage Wilde. Skewering the social scene in the driest of bons mots, the matrons are blissfully unaware of tensions among certain guests. Politically ambitious Lord Illingworth and his newly appointed aide’s mother are living with a secret that, when revealed, changes their lives (and triggers a dramatic halftime curtain.) 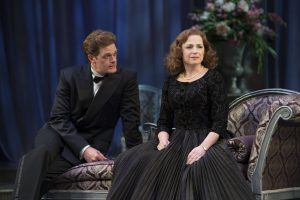 Lord Illingworth (Martin Happer) and Mrs Arbuthnot (Fiona Byrne) share a secret in “A Woman of No Importance”.

Hester, an outspoken young American, adds spice with her progressive opinions on relations between the sexes. “Don’t have one law for men and another for women,” she boldly pronounces. Director Eda Holmes has set the 1893 play in the conservative 1950s. Relevant then. Relevant now.

Bernard Shaw’s Mrs. Warren’s Profession also deals with a secret that alters relationships. It is 1895; university Actuary Science graduate Vivie Warren faces a moral dilemma when she discovers that the source of her generous ‘allowance’ has been from her mother’s former “oldest” profession and her current financial interest in real estate where that profession is practiced by others. (Prostitution is not so named, but it is made clear.) Regardless of her mother’s protestations, Vivie rejects mom in every regard.

The play, banned when written, is staged here as a reading in a private club, with members posing for selfies before it begins. Between that prologue and what seemed to be a 1950s setting (again by director Eda Holmes), I wasn’t sure what era we were in. A Victorian daughter cutting off all contact with her mother over the issue seems plausible enough, but I had a hard time accepting the self-righteousness of this punky-style, jeans-clad Vivie.  Her very youthful appearance also lends an ick factor to the scene where a wealthy older man hits on her. (He suggests marriage, but still…) 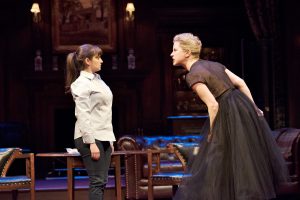 Despite the noted anomalies, this is, after all, Shaw at his namesake Festival. Nicole Underhay turns in a powerful performance as Mrs. Warren, who expresses some regrets but does not back down in the face of condemnation. The author often employs a surrogate in his plays; here, the title character serves that function. When she says “The hypocrisy of the world makes me sick,” Mrs.Warren is speaking for George Bernard Shaw.

Located in the heart of the Niagara wine region, The Shaw Festival runs into mid-October. Besides the plays mentioned, the season includes “Sweeney Todd” and “Our Town”. For a comprehensive brochure: www.shawfest.com