The aphorism “There are no accidents” has been variously attributed to Sigmund Freud, Deepak Chopra and Pablo Picasso. Things that occur seemingly by chance are, accordingly then, intended (consciously or sub-), mystically directed, or creative opportunities. Playwright Sandy Rustin’s own collision with a bicycle on a NYC street inspired her (a la Picasso) to write “Struck,” a play that incorporates both Freud’s and Chopra’s options. Her play is now world-premiering at New Jersey Repertory Company.

As it begins, sometime-working actress Vera Resnick (Susan Maris) has just been hit by a bicycle at an East Village intersection. Now, having said that much, the question is how much more of the “serio-comedy” to reveal without including spoilers. A bare-bones plot summary is fair game: Visibly bruised, Vera makes it to her Upper West Side apartment where she’s comforted by her divorce-attorney husband Nate (Adam Bradley) and fussed-over by her neighbor Vicky (Jenny Bacon), a self-styled mystic. 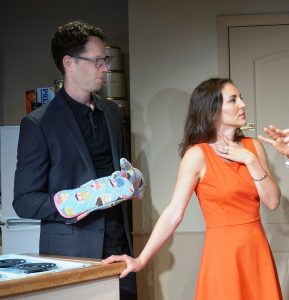 To assure the biker that she’s okay, Vera calls him (they had exchanged info) and soon after, he shows up at the apartment (there’d be no play if he didn’t) bearing flowers and a gift subscription to a genealogy-research website. Closing in on spoiler territory here, it turns out there might be a connection between pedaler and pedestrian based on ethnic, political and historical elements. Or maybe not.

Under Don Stephenson’s fluid direction, relationships and unexpected occurrences co-exist in the several scenes (over a week or so) without getting in each other’s way. What happens to and around Vera and Nate is extreme, but down-to-earth acting lends credulity. The actors Maris and Bradley seem as comfortable together as do their characters. Vera and Nate react to the accident and to other disturbing revelations in realistic terms. Their mutual affection is ingratiating; it’s not gooey-written or over-acted. Their patience with their neighbor is saintly; Vicky is an over-the-top, new-agey, 1970s throwback. Ms. Bacon’s outré performance conforms to that description. 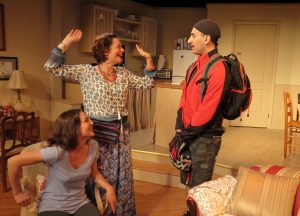 Benjamin Puvalowski, a New Jersey local, now Drama student at NYU, makes a fine NJ Rep debut as the biker, James, who ‘ran into’ Vera. (Commenting on James’s Facebook pic, Nate says he needs to lose 40 pounds, in which event Puvalowski would disappear.)  A fifth character, a French hedge-fund manager, is played by Matthew Shepard (his real name, one must assume). As suave and perfectly accented as he is, I was certain he’d come from France to play the important role. But no; Shepard is a Yank; it’s just good acting. 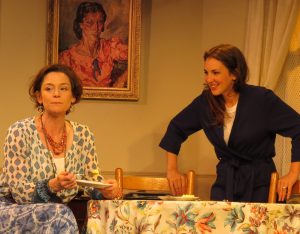