I must confess that although I wanted to attend Paper Mill Playhouse’s first opening following the announcement of the venue’s Regional Theatre Tony Award  (see below), I was thinking that I really didn’t need to see another “West Side Story”. After all, I had seen the original, two Broadway revivals, three community productions, one at Stratford, Ontario and, of course, the movie, most recently with the Toronto Symphony playing the score live. Boy, was I wrong.

Paper Mill’s “West Side Story” is terrific. To Mark S. Hoebee and Alex Sanchez’s credit, neither has deviated significantly from Jerome Robbins’s original direction and choreography, respectively. (Sanchez’s billing actually reads “Choreography Reproduced by…”) The staging and dancing are unabashed homage, and not at all rusty as presented by a dynamite youthful cast. Re-visitors to the show will be transported back; WSS virgins will be simply transported.

No one questions the brilliance of the “West Side Story” score. Leonard Bernstein’s music and Stephen Sondheim’s lyrics are high points in the history of the American musical theater. Arthur Laurents’ scenario pits 1957 Anglo (Jets) and Puerto Rican (Sharks) street gangs against one another, loosely paralleling Shakespeare’s “Romeo and Juliet,” and although parts are dated (“daddy-o” gang members “rough-housing” ?), this cast carries it off smoothly, and the expressions of  youthful love and angst are timeless. 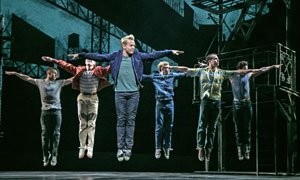 Nearly all of the principals are new to Paper Mill, if not to their roles. Backed by music director Steve Orich’s lush 20-piece orchestra, not a-one of them could have been better elsewhere. In the first act alone, Matt Doyle, as Tony, the Romeo avatar, sings “Something’s Coming” and “Maria” with all the depth of passion – and clarity of tone – that those classic songs deserve. Belinda Allyn (Maria/Juliet) is his match; their “Tonight” and “One Hand, One Heart” duets are gorgeous. And their in-character chemistry is electric. 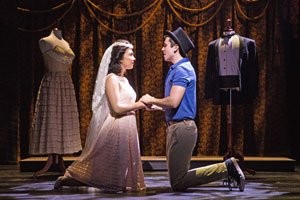 Belinda Allyn and Matt Doyle as Maria and Tony (“One Hand, One Heart”)

As Anita, Maria’s mentor, Natalie Cortez is as fiery as her character, singing and dancing up a sensual storm and mining every bit of humor and compassion in the character. Mikey Winslow and German Alexander embody the leaders of the Jets and Sharks, and Dean Andre De Luna stands out as Chino, Maria’s would-be suitor. The role of Anybody’s, the Jets’ tomboy hanger-on, has always been a scene-stealer; pony-tailed Maria Briggs does not break that tradition. Among the adults, Jay Russell infuses the soda shop proprietor’s futility with empathy. 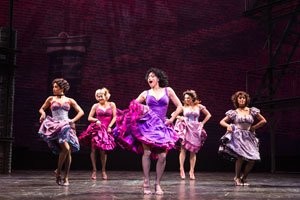 As a group, the large ensemble, providing much more than just backup, deserves star billing. Charging in, out and around designer James Youmans’ excellent atmospheric sets, their energy infects every person within sight and hearing. I’m suggesting you be one of those.

[The only competitive Tony Award announced in advance is the Regional Theatre Tony, which is voted by some 280 members of the American Theatre Critics Association (ATCA) nationwide and then submitted to the Tony powers-that-be for their approval. This year’s Awardee is Paper Mill Playhouse, and I can now reveal – with pride – that it was I who wrote and submitted the nomination (with a second from fellow NJ critic Simon Saltzman). You will understand, I’m sure, if I regard Paper Mill’s Tony Award as my own by proxy. Well, sort of. Be watching on CBS-TV 8PM Sunday evening July 12. And don’t tune out after the “Hamilton” number.]

Writer, composer and leading actor of the record 16-Tony Award-nominated “Hamilton,” Lin-Manuel Miranda, will likely sweep his personal categories on June 12 and have been thanked by his director and as many as a half-dozen other collaborators.

By selling out every performance, including standing room, “Hamilton” is responsible for the 2015-16 season’s record-breaking attendance numbers. (Without “Hamilton” there’s a decrease over the previous season.) And while, historically, more people watch the Oscar telecast than watch the Tonys, that stat could well be stood on its head this year, with the promise of a live performance from the mega musical. 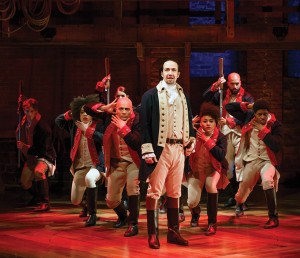 So saying, “Hamilton” is a no-brainer for the Best Musical Tony, against “Bright Star,” “School of Rock,” “Shuffle Along” and “Waitress,” any of which might have won in another year. Lin-Manuel Miranda is also a shoo-in for Best Book, Best Original Score (music and lyrics) and Best Actor in a Musical. At the risk of this column (and the Tonys themselves) becoming a Hamilton homage, the show is also my pick for both Best Director, Thomas Kail, and for Best Costume Design of a Musical, Paul Tazewell.

Best Leading and Best supporting Actress in a Musical could also go to Hamiltonians, Phillipa Soo (Leading) and Renée Elise Goldsberry (Featured), although my vote for Leading would go to Jesse Mueller for “Waitress” and for Featured to Danielle Brooks for “The Color Purple”. Ironically, three “Hamilton” Featured Actor in a Musical nominations are likely to cancel one another out; my dark horse prediction is Christopher Fitzgerald for his scene-stealing turn in “Waitress”. 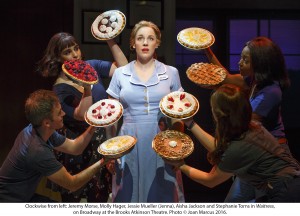 A couple of the straight-play awards seem pretty clear cut, including Best Play to the rave-reviewed “The Humans” and Best Actor to Frank Langella for his devastating portrayal of an old man’s descent into dementia in “The Father”. (Seventy-eight-year-old Langella’s acceptance speech at the Outer Critics Awards was a soul-baring scene-stealer in itself.) My pick for Best Director of a Play is Ivo Van Hove, who re-imagined “Arthur Miller’s A View from the Bridge” as a Greek tragedy. 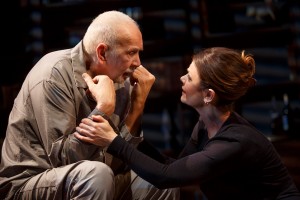 Best Revival of a Musical is a hedged bet. Among four deserving nominees, I’m predicting either “The Color Purple” or “Fiddler on the Roof,” intending no disrespect to co-nominees “She Loves Me” and “Spring Awakening.” Best Revival of a Play will be “Long Day’s Journey Into Night,” starring my pick for Best Leading Actress in a Play, Jessica Lange. 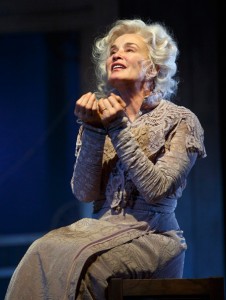 The Tony for Best Choreography should be a tribute to the mature talents of Savion Glover for “Shuffle Along”. The last time I recall so many emotions expressed through tap dancing was in “Bring in ‘Da Noise, Bring in ‘Da Funk,” choreographed and performed by Glover, then 22, in 1996.

Adrienne Warren and members of the “Shuffle Along” company