A “Mama” To Remember At Two River Theater

It’s a safe bet that Heather Mac Rae never dreamed she’d be cast in a role created by Marlon Brando. No, the venerable actress is not playing Terry Malloy in a remake of “On the Waterfront.”  She is, however, playing Nels in the all-female-age-60-plus “I Remember Mama” at Two River Theater Company, a role Brando created on Broadway in 1944 at one-third that age.

Further, playwright John Van Druten could not have imagined his 22 characters, of both sexes ages eight to about 50, being performed by ten women whose longevity is referred to as of-a-certain-age. The “Mama” casting is a testament to theatrical imagination, in this case that of director Jack Cummings III, co-founder and artistic director of Transport Group Theatre Company, where this production originated.

The question of whether or not “I Remember Mama” holds up after 72 years is rendered moot by Cumming’s vision. Somewhere between gimmick and resuscitation, it sets “The play’s the thing” on its ear; here, the casting’s the thing. It takes a while to separate play from performance, but eventually the two mesh, especially when emotionally charged moments allow the women to loose their talents.

The play is adapted from Kathryn Forbes’s memory-novel “Mama’s Bank Account,” just as Van Druten had also adapted Christopher Isherwood’s “Berlin Stories” into “I Am a Camera,” which in turn became “Cabaret.” This is not to minimize Van Druten’s accomplishment. You think it’s easy? Pick up a novel and try it. 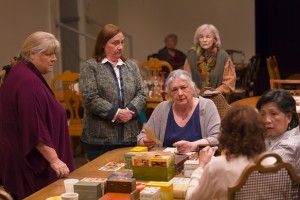 The play evolves as Katrin (Mia Katigbak), a stand-in for the original author,  writes about her Norwegian-American family in early 20th-Century San Francisco, with Mama (Barbara Andres) at the hub of every compressed anecdote. Katigbak and Andres play their characters throughout, while eight other women take on the 20 others: two other daughters, a son, aunts, an uncle and sundry.

Ms. Andres embodies the forbearance of the wise and loving matriarch. Her immersive performance is a maternal embrace. Ms. Katigbak acts the frustrated writer convincingly. Her mature-age audience-directed narrations could be more congenial, but they move the story along. 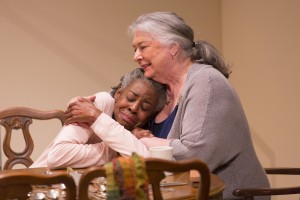 The male roles are evocative. Besides the teen son, Ms. Mac Rae plays the diffident fiancé of Aunt Trina (Rita Gardner). The couple’s tentative dowry scene with gruff Uncle Chris, one of two male roles played to perfection by Lynn Cohen, is a gem. Dale Soules is Papa, man of few phrases. Ms. Soules makes every one count with impeccable comic timing. Among the others, Marjorie Johnson’s daughter Dagmar (about eight, according to Van Druten) stands out, and there’s nary a fault among Alice Cannon, Susan Lehman and Louise Sorel in a passel of other roles.

The doubling and tripling tends to inhibit continuity, and director Cummings’ propensity for staging scenes against the upstage wall and in a far corner, does not enhance the proceedings. Designer Dane Lafferty’s set is ten various-shaped and adorned tables, presumably representing the ten actors. It is not an easily navigated floor plan.

Cast as it is, the play will likely appeal to theatergoers of like gender and age, a demographic to whom I wholeheartedly recommend “I Remember Mama”.

It’s been a good year so far for several Two River alumni. Ruben Santiago-Hudson, who directed August Wilson’s “Jitney” and “Two Trains Running” as well as his own-written “Your Blues Ain’t Sweet Like Mine” at Two River, earned rave reviews for his direction of “Skeleton Crew” off-Broadway. 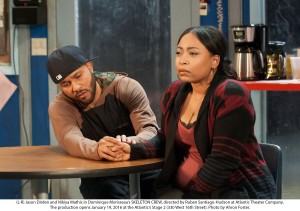 Canadian actress Sara Topham graced several U. S. stages in recent years, including a memorable appearance at Two River as Celia in Shakespeare’s “As You Like It” . 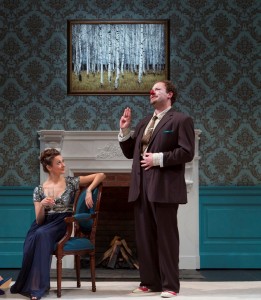 A Stratford (Ontario) Festival company member for several years, her roles there have included Olivia in “Twelfth Night,” Cordelia in “Lear” and a luminous Juliet. No stranger to modern works, as her Brook in “Noises Off” and Maggie the “Cat” will attest, she is currently starring in David Hare’s “Skylight” at a newly-founded theatre company in Toronto. 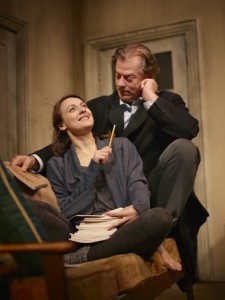 “Skylight” premiered in 1995. Contacted via e-mail, Ms. Topham replied: “It doesn’t seem like there’s any difference in [the play] simply because it’s 2016,” she wrote. “We are still dealing with the massive gap between rich and poor…access to education and opportunity based on circumstances into which a person is born makes for an impossibly un-level playing field.” Of her character whose life-choices no longer revolve around her former lover – and the play’s sexual/feminist undertones, she said “The intervening 20 years haven’t seemed to shed any different light [on those elements]. The play matters as much now as did in 1995,” she opined. (I’m looking forward to seeing it on June 24.)

As Pseudolus in Two River’s “A Funny Thing Happened on the Way to the Forum” last year, Christopher Fitzgerald was “a virtual perpetual motion machine, loose-limbed as a puppet on a string and possessed of pin-point comic timing.” His Tony-nominated scene-stealing turn in “Waitress” on Broadway is all that and more. 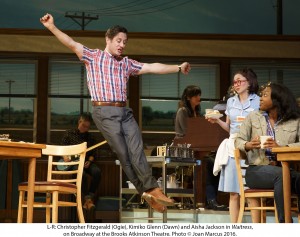 (The Featured Actor Tony Award went to a “Hamilton” actor, but Chris had prevailed at both the Drama Desk and Outer Critics Circle Awards.)