The principal difference between a stage play and a radio play is that a certain amount of the exposition is – or should be – shown on the stage while it is all told on the radio.

Even though “Villainous Company” is being performed on the New Jersey Repertory Company stage, Victor L. Cahn’s script is, in essence, a radio play. Everything you learn about the plot of the one-act trifle is spoken by one (or more) of its three female characters. Very little is enacted, which is not to blame the capable cast; the primarily expository dialogue leaves no wiggle room for acting.

In deference to the playwright’s intention to keep the plot developments suspenseful (until they are recited), we’ll offer up only the bare bones: Arriving home from shopping, Claire (Pheonix Vaughn) realizes she’s missing one of her purchases. Soon enough, store representative Tracy (Melissa Macleod Herion) shows up at the door with the package. Nordstrom-level service, you say? Well, not quite. Tracy insinuates herself into Claire’s space and suspicion mounts that neither woman is who she appears to be. When Claire’s friend Joanna (Corey Tazmania) arrives, the already clarity-challenged interplay expands. 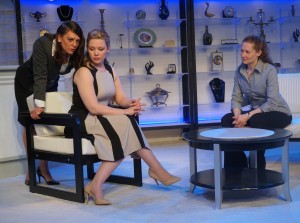 Does the errant package really contain a thirty-dollar clock? What does the display-shelf appearance of Claire’s apartment walls signify? Does a single earring factor in? How ‘bout a single sterling silver spoon? (A set of Gorham tableware is worth a cool million today? Really?) These and other questions are asked and eventually answered (literally) in the course of 85 real-time minutes.

All three actors deliver plot points with conviction. Vaughn struggles as little as does her character with the illogic of suffering the unidentified intruder’s interrogation, and Herion projects a degree of authority, even with her shirt off. Joanna is a cool customer; Tazmania plays her just so. One wishes the three had more to portray than just to pronounce.

Considering the narrative style, director SuzAnne Barabas has little to do besides moving her cast around the stark set. And given that Tracy describes Claire as having a flair for color, the absence of color on the set and costumes in favor of black and grays is a curious choice. (Vaughn’s long, bright blonde tresses provide the sole – and welcome – splash of color.)

Playwright Cahn has the right idea about foreshadowing resolutions with clues planted along the way. Background snippets of “Pennies from Heaven,” for example, and Claire’s 41-cents lunch-counter change are seemingly innocuous insertions that lead to an Aha! reaction. With too few of such clever touches, however, “Villainous Company” is show-and-tell without the show.