What better place to spin a yarn about shipwrecks, pirates, sex and violence and such than in what’s known in modern parlance as a dive bar? While William Shakespeare did not set “Pericles” in a pub, Two River Theater has done just that, and a fortuitous transfer it is. They also added music aplenty, with Shakespeare’s words for lyrics. The result is a treat for the eyes and ears.

“Pericles” is one of The Bard’s Romances, not outright comedies, or, with their upbeat endings, tragedies. With several mystical plot twists, “Pericles” embodies that genre to a tee. Shakespeare framed the fantastical scenario as a tale being told by a narrator, represented at Two River by a scruffy fellow who kicks off the action by assigning roles to the bar patrons and employees.

Below: The welcoming dive bar where Two River’s “Pericles” unfolds: 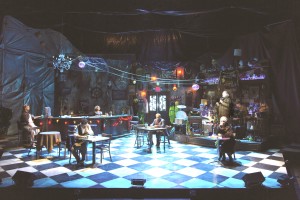 At the start, Pericles is forced to flee after uncovering the incestuous relationship between the King of Antioch and his daughter. An ensuing shipwreck leaves Pericles washed up on a foreign shore, where he wins, by jousting, the hand of that land’s Princess Thaisa, who later dies in childbirth and is buried at sea in a sealed casket. Pericles then leaves his infant daughter Marina with Dionyza, who, when Marina outshines her own daughter, conspires to have her killed. Before the nasty deed can be accomplished, Marina, now 14, is kidnapped by pirates and sold into a brothel where she convinces her potential debauchers to respect her virtue.

Wait, there’s more: magic potions, two resuscitations and a pair of extraordinary coincidences add to the reasons the play is rarely produced today. Remarkably, the adventures are all vividly represented at Two River Tavern, um, Theater in Red Bank. 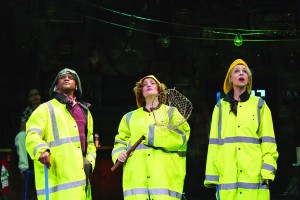 The cast of seven is as versatile as they are talented. Rinde Eckert, who composed the music and the ‘new’ lyrics (more below), appears as the narrator and performs in the tight on-stage band. He also plays Old Pericles, a textual digression (Shakespeare included only one Pericles). Philippe Bowgen, who had played Young Pericles with a fine blend of sincerity and humor, then morphs into Lysimachus, who courts Marina (post-brothel, of course). 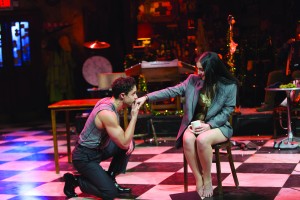 Everyone at least doubles. In one casting coup, male actor J. Clint Allen plays the incestuous daughter (hilariously) as well as a variety of male roles. Nikki Massoud plays the mother Thaisa and the daughter Marina, who appear together in the final scene. (Don’t ask; it works.) Kevin Mambo portrays the incestuous King as well as Dionyza’s henpecked husband Cleon and Simonides, who allows his daughter Thaisa to marry Pericles.

Ellen Harvey gets to have it both ways, plotting Marina’s murder as Dionyza and then offering solace as Goddess Diana (with a tart tongue, it should be noted). Among the roles that Mary Testa tackles are the bawdy brothel-keeper, frustrated with Marina’s reluctance to give it up, and the “physician” whose incantations bring Thaisa back to life; Testa’s take on the doc is very, very funny.

Rather than a play with music, this “Pericles” is a musical play. Eckert’s delightful tunes are enhanced by the unique, antique instrumentation. Most of the lyrics are Shakespeare’s, but those that are not derive from the text. In one example, a couple minimizes their own woes by envisioning people who are even worse off; cue the ironic “We Love the Poor.” Another gem (pun-alert!) is mined when Thaisa’s father declares Pericles to be ordinary and Thaisa remarks “To me he seems like diamond to glass.” The “Diamond to Glass” number that follows is a pip.

If his only contribution had been to devise the representation of Marina’s conception and Thaisa’s pregnancy, director David Schweizer would merit high praise, but the entire staging reflects his creative touch. Dan Knechtges’s choreography is spritely; the costumes (Gabrielle Berry) are witty; and Caleb Wertenbaker’s saloon-set is perfection in concept and detail.

There’s a big difference between making fun of a work and having fun with it. As funny as this interpretation is – and it surely is – Shakespeare’s intent is honored. None of the play’s inherent Romance, Drama, Pathos and even Suspense is neglected. In these days surrounding the 452nd anniversary of the playwright’s birth (and 400th of his death), the rumbling you hear is Shakespeare stirring in his grave the better to applaud this terrific “Pericles.”

Postscript: There is some question as to Shakespeare’s sole authorship of “Pericles.” While most of the play is beyond doubt his work, there are portions that may well be the work of one of his contemporaries. To those who suggest that someone other than The Bard wrote all the plays, however, my favorite rejoinder: If Shakespeare did not write the plays, they were written by some other guy named Shakespeare.