“Ropes” will rope you in…

Presley, Paul and Prince do not look much like brothers, but thanks to “Ropes” playwright Bárbara Colio, translator (from the Spanish) Maria Alexandria Beech, three sterling performances and director Lisa Rothe’s deft management of those artists at Two River Theater, there’s no doubting the sibling relationship.

A fourth character, the brothers’ father who had abandoned the family years before and who became the world’s greatest tightrope walker, does not appear. It is his letter to eldest son Presley, however, asking him to corral his estranged brothers to witness an unprecedented high-wire act that spurs the action. The play is less about dad’s feat than it is about the brothers’ attitudes toward him and their relationships with one another.

Sprinkled with hints about past and present motivations (the brothers consider themselves on a “mission”), some elements remain unspecified. Among them is the location. A reference to dad’s walking “between the world’s tallest buildings” conjures up the World Trade Center (and Philippe Petit), but no city is mentioned. Getting to wherever-it-is, however, entails a lengthy, connecting-flight journey. In the play’s compact 85 minutes, our travelers are variously in the air (turbulence alert!), on a waiting-area floor (gum-icky), at an airport bar (mmm, libation) and duking it out in a customs line, all enacted on a rectangular, runway-like platform aligned at a diagonal. Narelle Sissons’ deceptively simplistic set design and Mary Louise Geiger’s excellent lighting complement the play, and the actors maneuver on the limited space with ease. 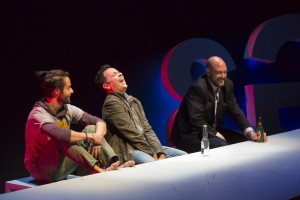 Presley (Luis Moreno) is the bossy bro, possessed of funds enough to spring for first-class tickets, but saddled with a wife who is, for reasons not disclosed here, his albatross. Moreno inhabits Presley’s eldest-brother’s controlling attitude (and his camel-hair coat) as if born to it.

Despite a history of emotional abuse, youngest son Prince has mastered tightrope-walking by practicing on narrow ground-level strips, a skill that Gabriel Gutiérrez demonstrates with eye-catching artistry. You’ve seen it for real up high in a circus? You’ll feel the same sensations watching the actor mime the precarious stunt. It is an important facet of Prince’s personality (as is his own wife’s plight), and Gutiérrez brings it vividly to life.

Middle-brother Paul isn’t exactly comic relief, but he does have the most intentionally funny lines, and not one of them gets by Varín Ayala without provoking at least a chuckle. His opening monologue (each brother has one in the course of the play) is beautifully written and delivered. It’s built around Paul’s “The Power of Your Stare” theory, and Ayala’s visual connection with the audience brings the point home, big time.

The play veers into melodrama near the end and the actual ending is no surprise, factors that barely dent its impact. “Ropes” was featured in 2013 as part of Two River Theater’s Crossing Borders Festival, which presents new plays by Latino/a writers, but it would be a mistake to define its subject matter or appeal by its country of origin. Ms. Colio is a prize-winning Mexican playwright, whose plays have debuted in a dozen countries, and some of the “Ropes” airport announcements are even in French. (Performances in Spanish are scheduled for students on March 3 and for the public on March 5.) At any rate, if dysfunctional parenting and tension among siblings are limited to any racial, ethnic, or geographical group, it’s news to me…as it is, I suspect, to you. You will be roped in by one or more elements in “Ropes”. Guaranteed.