Worst play ever…don’t miss it! (Or Linda Lavin either)

The play-within-the-play is mangled by a third-rate troupe of British actors preparing to take it on the road (Act I), then performing it weeks later (Act II), and closing it a few months down the road (Act III). At Roundabout’s American Airlines Theatre these weeks, the third-rate troupe is played by an ensemble for which the phrase “first-rate” is an understatement.

During rehearsal and performance of “Nothing On,” everything that could go wrong does go wrong, until finally, plagued by backstage drama as well as inept stagecraft, the play is a shambles. The thing is, playing that fiasco requires pinpoint timing and coordination among the fellow pretenders, never better executed than here. (Locally, NJ buds, Red Bank Catholic High School pulled it off in 2006, and Holmdel Theatre’s ‘08 production was super.)

In the course of Michael Frayn’s hilarious play(s), doors that should open don’t (and vice versa), entrances are ill-timed, cues are missed, and plates of sardines are never where they should be. (Sardines? Yup. Don’t even ask.) 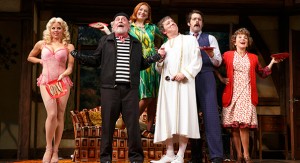 Singling out one or two of the finely-calibrated acting octet is a fool’s errand, but Andrea Martin, an anointed stage legend (in mid-career, thank goodness), is on the tippy-top of her game as the housekeeper who struggles with her lines and those sardines.

As the “Nothing On” director, Campbell Scott progresses (or regresses) from mild helplessness to a frustrated boiling point, and Tracee Chimo and Rob McClure are a perfect pair of exasperated stage managers. (Actual director Jeremy Herrin gets the Coordinated Chaos Award, with actual stage manager/show runner Linda Marvel living up to her surname in every particular.)

News flash: Megan Hilty is ravishing in stylish undies. But it’s her comic take on the ingénue who stays on script no matter where everyone else goes that elevates the role to star status. Seen from the front as well as from backstage, the awful “Nothing On” is the sweet center of an awesome “Noises Off.” The play itself is a comic masterpiece; the production takes it to a sublimely farcical level.

Leaving the theater after a recent performance of “Our Mother’s Brief Affair,” I heard someone comment that he likes plays that end with a question. Like, did the related incident really happen? Was the main character telling the truth? Were the characters who they said they were? Despite being unable to think of many (“Edwin Drood” maybe), I found myself agreeing, if only on the basis of the play we had just seen.

The brief affair of the title is one revealed to her adult twin daughter and son by Anna, hovering on the brink of death (again), and played deliciously by Linda Lavin, whose trademark acid delivery takes center stage once again. Ms. Lavin’s acerbic women are the stuff of legend. “Brief Affair” is minor-league Richard Greenberg, whose baseball-themed “Take Me Out” swept the Best Play awards in 2003, but Lavin’s Anna is worth the price.

On her third or fourth deathbed, long-widowed Anna asks the twins “Did I ever tell you about my affair?” and we’re off and running. After some shocked reaction from the siblings, somewhat shallowly written but played well enough by Greg Keller and Kate Arrington, Anna opens up about her 20-some years ago affair.

The first act can be described without spoilers: Anna meets her Lover (John Procaccino) on a bench after dropping off Greg for his viola lesson at Julliard. They share some memories – a long-ago common neighborhood is one – leading (no surprise) to a series of rendezvous in an off-the-beaten-path hotel. Director Lynne Meadow’s staging of the revelation scenes is engagingly clever. The bench scene is enacted on one end of the stage while the twins are watching mom (listening to her, actually) at the other end. Anna alternates her attention between the two settings, with shifts of focus that Lavin pulls off with finesse. Every feature – her voice, facial expressions, even, it seems, the twenty-year aging – adjusts in the instants it takes to turn her attention back and forth.

To tell too much about the second act would indeed be a spoiler. Suffice it to say that someone turns out to be different from how it appeared earlier, that disregarded political and social values come into play and that the audience gets something of an education they did not anticipate. Whether or not the topic is a welcome one, or even interesting, is up to the individual, of course. It was to me, but as noted, I like plays that end with a question. Especially when Linda Lavin is posing it.
Manhattan Theatre Club at Friedman Theatre, 261 West 47th Street, NYC. Performances Tues-Sun. Schedule and tickets ($60-$140): Telechage.com