The “Eyes” have it at George Street Playhouse

There’s more to “Nureyev’s Eyes” than meets the eye. David Rush’s prize-winning play, at George Street Playhouse in New Brunswick, NJ, is based on the real-life bond that developed in the 1970s and ‘80s between the high-profile Russian defector, ballet superstar Rudolph Nureyev (1938-’93), and acclaimed portraitist Jamie Wyeth, born in 1946, and still art-active (and son of Andrew Wyeth of Christina’s World fame). “Nureyev’s Eyes” is as much about the men’s art forms as about the men themselves.

The play tracks the relationship that began when, at the behest of Lincoln Kirstein, co-founder and General Director of the New York City Ballet, Nureyev reluctantly agreed to sit for a Wyeth portrait. For the uninitiated, like myself, it is instructive to learn that the process, from negotiating the how’s, when’s and where’s of posing to the end result on, um, cardboard (Wyeth’s medium-of-choice), can take years. In these two volatile gents’ case, years of bickering, bitching and, ultimately, bonding. (And who knew that assessing bodily proportions with a caliper was involved?) 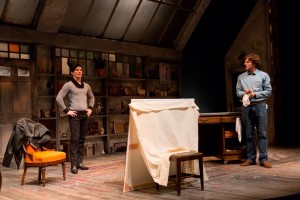 The playwright might have been guided by Wyeth’s own words: “To me,” he said, “a portrait is not so much the actual painting, but just spending the time with the person, traveling with him, watching him eat, watching him sleep…it’s really osmosis. A successful portrait isn’t about the sitter’s physical characteristics…but more the mood and the overall effect.” No wonder that after many months of getting-to-know-you, the result was just a few rough sketches.

As depicted, the dynamic between the men shifts in often amusing ways. After Nureyev imperiously itemizes the conditions under which he will pose (to be drawn only in left profile is one), Wyeth effectively shoots them down one-by-one. Their budding friendship is also marked by an appreciation for “gotchas”. When Nureyev remarks that while dance is constant motion, painting is the exact opposite, Wyeth’s counter is that dancing disappears while paintings last forever.

Because Nureyev was the essence of flamboyance and his life (which ended due to the viral scourge of the period) was marked with adventure, the role is the flashier of the two, but the actors, William Connell (Wyeth) and Bill Dawes (Nureyev), complement one another as well as any duo I’ve seen. Connell’s delivery of Wyeth’s description of a painting that left him permanently fearful of the dark is a haunting reverie.

Among his several high points, Dawes enacts Nureyev’s impression of the first man to dance, positing that the first dance evolved from hunting stances, which he illustrates in a totally plausible variation. (Dawes is not a dancer, btw; it’s called acting for a reason. And after all, he did play Mickey Mantle in “Bronx Bombers.”)

Either man’s career, multifaceted beyond the obvious (Wyeth held NASA’s top security clearance, for example, and Nureyev’s appearance on “The Muppets” triggered the celebrity-rush to that show), could fill much more than one 90-minute play. David Rush’s accomplishment lies in not being distracted. “Nureyev’s Eyes” is about the men’s relationship, personally and through their art forms. One wishes that Wyeth, as depicted, had more oomph, but the play, directed by Michael Mastro with his own knowing eye for the two characters’ (and actors’) emotional as well as visual proximity, leaves little doubt that Rudy and Jamie ended up buddies.
Through Feb.21 at George Street Playhouse, New Brunswick, NJ. For schedule and tickets ($25-$69): 732-246-7717 or online at www.GSPonline.org