A Loving, Lush Revival of “Fiddler” on Broadway

I was fortunate to attend a recent performance of “Fiddler on the Roof” on Broadway with someone who had never before seen the play or movie. Experiencing it with her, re-discovering afresh the classic’s emotional depth, unpretentious humor and musical charms, was a revelation. This loving, lush revival is a timely reminder that the parallel stories of ostracism and displacement, rooted in anti-Semitism or other, and of the erosion of tradition in the face of evolving values, are as common today as they were in the Jewish village of Anatevka, Russia, in 1905.

Adapted from the stories of Sholom Aleichem, the “Jewish Mark Twain,” the play transcends its setting. In fact, the initial appearance on a bare stage of Tevye actor Danny Burstein in modern dress, perusing a book, deep in thought as if contemplating his forebears, plants this “Fiddler” firmly in the present. His reverie lasts about a minute before he sheds his jacket, revealing traditional garb with a fringed tallis and segueing into the narration that leads in turn into the stirring opening number “Tradition”. 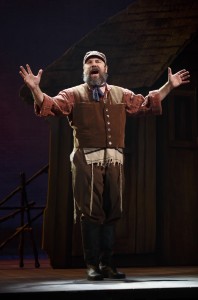 That opening staging is director Bartlett Sher’s, whose magic touch lent new relevance to both “South Pacific” and “The King and I” at Lincoln Center. Without diminishing the preeminent Tevye, the director’s “Fiddler” is first and foremost an ensemble piece. Tevye, still central, does not dominate, which is not to devalue Burstein’s performance. The actor neither booms unnecessarily nor plays for laughs, pitfalls many a Tevye tumbles into. It’s a warm, rounded, paternal (in the best sense) performance, distinguished early when he reveals so much in “If I Were a Rich Man,” just one of the Jerry Bock (music) and Sheldon Harnick (lyrics) songs that move the story along and that linger in memory for days after seeing the show.

Tevye’s long-suffering, sometimes overbearing wife (and mother of their five daughters), is given to caustic, bossy remarks. In Jessica Hecht’s endearing take, Golde is never less than a caring nurturer. “Do You Love Me?” Tevye and Golde sing together. Well, yeah. 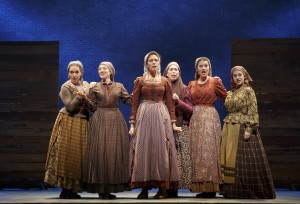 Jessica Hecht as Golde, center, with the wives of Anatevka

The eldest three of the five daughters charm their way into every heart with “Matchmaker, Matchmaker” before, one by one, they each challenge tradition in choosing a husband. (Choosing at all, rather than being assigned, is itself a major departure.) In Joseph Stein’s perfectly constructed book, the story line of the daughters and their suitors progresses from one with a joyful and amusing resolution, through a bittersweet romantic one, to one that tears at Tevye’s very being. The daughters and their fellows are wonderfully acted and sung. Middle daughter (of the three) Hodel sings the haunting “Far From the Home I Love”; Samantha Massell’s rendition is lovely beyond description. I’m hearing it still. 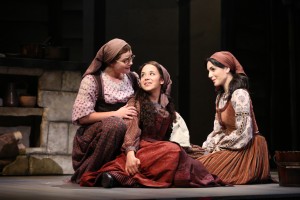 Hofesh Shechter’s choreography is based on the Jerome Robbins original, but not slavishly. There’s more – and heartier – dancing than I remembered, or so it seems. The male ensemble does the heavy stepping; they are indefatigable. And not to worry: the bottle dance is intact.

In what has also become a welcome norm for major musical revivals, the orchestra, under Music Director Ted Sperling, is 20-plus-member strong, including concertmaster Kelly Hall-Tompkins, who is the fiddler in the pit while Jesse Kovarsky mimes one on the stage. A fine duo bookending a wonderful show.