“The Substance of Bliss” falls short of blissful

It’s about ten minutes into “The Substance of Bliss” before we learn what Paul (Christopher Daftsios) and Donna (Susan Maris) are doing out on their patio at 2AM, other than bickering over conflicting ideas for re-designing the small, upper-middle-class retreat (another scenic triumph for Jessica Parks). But as the advance blurb from New Jersey Repertory Company, where Tony Glazer’s one-act play is world-premiering, specifies, they are “waiting for their 15-year old drug-addicted son to return home late one night.”

If that seems bleak (if it doesn’t, you didn’t really read it), so is the generally humorless play, which uses the couple’s forced small-talk to mask their uncertainty and their guilt. “Our son,” as they refer to him (rather than by name or even ‘he’), is central to the play, but, like Godot, he’s a no-show. (What he might be doing in a public washroom is suggested, fortunately only in passing.)

The plot is pretty much covered above. Unless you’re fascinated by quibbles over whether or not to install a pool (Ms. Parks’s next challenge?), how to deal with cat poop or the esthetic value of a faerie statue, “get on with it” might be your quibble, as it was mine.

But even when they do, their failure to focus on Jesse (personalizing the lad), concentrating instead on their own tensions, renders Paul and Donna less than likeable and their hectoring rather irritating. Nor, for that matter, does it make them easy to act. 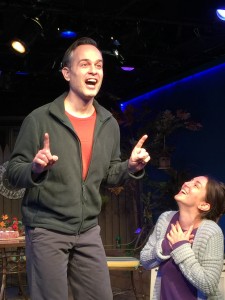 That said, Daftsios and Maris carry on like troupers. Donna is the alpha partner, a status Maris relishes. Her natural, near-constant motion, a big plus in a two-character piece, extends even to her face. (To the extent that director Evan Bergman encouraged that energy, thank you.) That Donna overshadows Paul is a given. That the actors mirror that relativity is a function of the roles, but still, when she said “You look agitated,” I wondered how she could tell.

Speculating further about Jesse would be unsupported by the play, which gives him short shrift. It would also be painful, so we won’t. Suffice to say that ‘their son’ is as unlikely to live happily-ever-after as are his parents’.

An anonymous Godot comment comes to mind: We all bring to Becket’s play whatever is uppermost in our minds. What we all take from “The Substance of Bliss” is relief that we don’t live next door to Paul and Donna.

Regular readers might be weary of a repeated complaint, but not so weary as I’ve grown from experiencing it: “The Substance of Bliss” includes a passage of shouted, no-holds-barred vulgarities. Ostensibly directed toward a nosy neighbor (voiced, it seems, by Linus Van Pelt’s teacher Miss Othmar), the extended string of vile epithets is yelled directly at the audience, seated only a few feet from the stage. I am hardly a prude, but the need to include the coarsest of invectives just because one can is sophomoric.

[This and other reviews, as well as news and events in the Red Bank area are published weekly in the Two River Times: www.tworivertimes.com ]