Falstaff in love by Queenly edict

Tradition holds that Queen Elizabeth, enamored of Falstaff from the Henry IV plays, asked Shakespeare for a play depicting the character in love. The playwright is said to have knocked out “The Merry Wives of Windsor” in a fortnight, portraying financially strapped Falstaff wooing not one, but two potential patrons, married women of means who conspire to turn the tables on the would-be seducer. It is Shakespeare’s only comedy set entirely in England…in Windsor, likely in deference to the Queen. The play is the December offering at the Shakespeare Theatre of New Jersey.

Believing that Mistress Ford (Caralyn Kozlowski) gave him “the leer of invitation” and Mistress Page (Saluda Camp) “examined” his “parts,” Falstaff sets out to seduce them both with identical love letters. Discovering the duplicity, the wives agree to “consult together against this greasy knight,” luring the hapless bloke into compromising situations from which he barely escapes by awkward means. 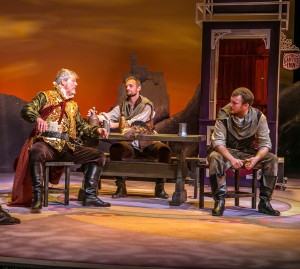 As for the women’s husbands, George Page (Joey Collins) is oblivious to his potential rival, while Frank Ford (Matt Sullivan) is obsessed with jealousy, assuming a false identity and worming his way into Falstaff’s confidence. Sullivan is especially entertaining as the inwardly fuming “Brook”.

Falstaff is referred to (in all three plays) as, well, fat. In “Merry Wives” he is also something of a buffoon, hardly the leading-man type he envisions himself to be. Director Bonnie J. Monte has chosen to ‘adjust’ his image (seen last weekend at its final preview). She has envisioned Falstaff as “an ageing playboy” who presents “a viable incentive for Master Ford’s jealousy” and is possessed of “an ironic self-awareness.”

As portrayed by David Andrew Macdonald, looking for all the world like Douglas Fairbanks with a paunch, Falstaff fits those parameters. The thing is, however, he, and therefore the goings-on around him, are not as funny as they should be. De-stigmatizing a stereotype, in this case a 400-year old prototype, may be a laudable endeavor, but in their effort to not make fun of what Monte exaggerates a “pitiful grotesque,” they don’t let him be much fun. Farce thrives on over-the-top situations and characters. Shakespeare provided the ingredients, but here a goodly portion of the verbal comedy, much at Falstaff’s expense, loses its tang.

Kozlowski and Camp, both resplendent in full-skirted, red-accessorized dresses (Yao Chen’s excellent costume design throughout), are a charming pair of co-conspirators who put-on Falstaff for their own diversion and amusement.

A sub-plot involves the Pages’ daughter Anne, whose suitors include French Doctor Caius (Jon Barker, quirkily funny) and doofy Slender (Jonathan Finnegan, channeling Gomer Pyle). Fear not, however; Anne ends up with her own beloved Fenton, in a bland-leading-the-bland matchup. Jonathan Wentz’ sketchy set design makes for awkward entrances and exits, especially the many ins and outs at the central Garter Inn.

Tinkering with Shakespeare is its own art form, and even though this re-imagining dampens the farcical elements, the all-too-rare production of “The Merry Wives of Windsor” is a welcome diversion.
Through Dec. 27 at Shakespeare Theatre of New Jersey in Madison. For Tues-Sun performance schedule and tickets (from $32): 973-408-5600 or inline at www.shakespeareNJ.org