A Band of Brothers plays The Count & The Duke

About twenty percent of “The Count (Basie) Meets the Duke (Ellington)” consists of 1930s and later tidbits and anecdotes about the musical giants’ relationships with their music, their collaborators and each other. An equal portion features projected stills and clips from video and film appearances, including the Basie band’s improbable cameo in “Blazing Saddles” and Jimmy Stewart sitting in with Ellington in “Anatomy of a Murder”.

As much fun as those segments are, the real treat is twin-brothers Peter and Will Anderson’s dynamite quintet that fills the remaining sixty percent of the 90-minute show with swinging renditions of tunes from the repertoires of America’s most famous band leaders. Together, the parts comprise a perfect fit for the intimate Theater C in the 59E59 complex on (duh) East 59th Street.

What “Count Meets Duke” is not is a roundup of top-ten hits. Sure, “Li’l Darlin” gets an outing, and “A Train” makes an encore appearance, but Basie’s lesser-known “Corner Pocket” and “Midgets” are highlights, and The Duke’s “Star Crossed Lovers,” excerpted from his Shakespeare-tribute album plants you right below Juliet’s balcony. There’s also a pulsating number, “Battle Royal,” from the one album the two bands made together, also titled “The Count Meets The Duke.” (The Anderson bros also feature one of Will’s originals, “Devil’s Advocate.” Why not? It’s their show.) 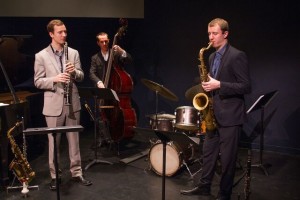 Acclaimed by jazz insiders since they were teenagers, the Anderson brothers combine extensive knowledge of jazz history with musicianship born of their love for the form. Peter puts his tenor sax aside only to pick up a clarinet, and Will blows alto, clarinet and, most expressively, flute. That versatility creates the welcome illusion that more than twins (triplets? quadruplets?) are fronting the superb rhythm section: accomplished pianist Steve Ash; bass player Clovis Nicolas, as adept bowing as plucking; and Phil Stewart, whose syncopated drum breaks stir the pot.

“HIR” worth it for HER

There is no other actor quite like Kristine Nielsen. Pacino gives off DeNiro vibes; Helen Mirren and Judi Dench might have been switched at birth. But Nielsen’s presence, jittery and smooth all at once, the quarter-beat delayed line-delivery and her unique way of turning a double-take into a triple, are nonpareil. 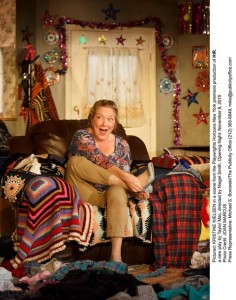 Taylor Mac’s “HIR” has been praised, ecstatically by some, and based on strangeness alone, it is something to behold. The dysfunctional family is a well-worn theatrical trope, served up here with relish.

A dishonorably-discharged PTSD-afflicted former Marine arrives home to what can charitably be called a mess, both the house and its inhabitants. His sister Maxine is now his brother Max; his abusive father has suffered a debilitating stroke that has virtually lobotomized him, and his mother (Ms. Nielsen) is essentially a functioning madwoman, revenging herself by subjecting her former abuser to sundry humiliations.

Ms. Nielsen plays the mother’s comfort with chaos and her disdain for order to a near-hysterical (hers and ours) tee. What happens among the family is alternatingly tragic and comic. Both extremes are accepted, even enhanced, by Nielsen’s interpretation. It is, in its own way, an elegant performance. “HIR” (a gender-neutral pronoun, btw) is worth seeing for HER.
Through Jan. 3 at Playwrights Horizons, 416 West 42nd St., NYC. Performance schedule and tickets: 212-279-4200 or online at www.PHnyc.org