Soon after “The Producers” opened to ecstatic reviews in 2001, a New Yorker magazine cover depicted an audience in fits of laughter with one angry-faced theatergoer among them: Adolph Hitler. I thought of that illustration as I watched “The Producers” unfold in the Axelrod Performing Arts Center, a primarily Jewish-community venue, in Deal, New Jersey. What the heck, I figured; if they can take it – multiple swastikas, arm-raised salutes and goose-stepping storm troopers – who was I to shy from it? So I didn’t. I sat back, enjoyed and, with some reservations, admired the production.

Mel Brooks’s adaptation of his own 1967 movie – he wrote the music and lyrics and, with Thomas Meehan, the book – is about a scheme to over-sell shares in a sure-to-flop Broadway musical, leaving the investors none the wiser. Producer Max Bialystock (Roman Sohor) and his nerdy accountant Leo Bloom (Dan Peterson) find “Springtime for Hitler,” a musical written by Nazi playwright Franz Liebkind (Jonathan Wells). Max raises $2 million from his harem of old-lady investors and they hire Roger DeBris (James Grausam), whose song “Keep It Gay” says it all, to direct the improbable musical.

The foolproof scheme goes awry when “Springtime” is a hit. Leo runs off to Rio with the money and Ulla (Kate Pentek), the Swedish sexpot who had been their secretary and actress. Max, meanwhile, is jailed. Via a combination of schmaltz and silliness, it winds down to a “happily ever after” finish. The show is relentless in its send-up of Nazism, but also of Jews, Germans, gays, women, seniors, and any other PC-protected group. The thing is, though, it’s damn funny. 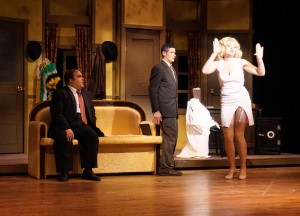 Both Sohor and Peterson have played their roles before, experience that works to the show’s musical advantage. Sohor has Max’s opening soliloquy “The King of Broadway” down cold and Peterson nails “I Wanna Be a Producer,” fronting a line of alluring chorines who pop out of upright cabinets. Director/choreographer Nicole Ceballos captures the essence of Susan Stroman’s original concoction, here and several other spots, including the old ladies’ tap-dance with their walkers (down to the falling-dominos bit, a la the Rockettes) and the mirror effect in the “Springtime” number.

The two leads’ experience is less well-served by a tendency to over-act some scenes, pushing verbal comedy to decibel-challenging levels (about which more below) and physical shenanigans into slapstick. (I had not seen Sohor before, but can attest to Peterson’s extremes.) Sohor also takes liberties with a precisely-crafted pause in Max’s jail-cell soliloquy, bringing the number to a premature stop.

Setting aside for a moment Ms. Pentek’s considerable pulchritude, it’s her knack for making the most of her singing and dancing that impresses. She is not destined for musical-comedy stardom (not a dis, believe me; few are), but her uninhibited go-all-out energy is a pleasure to witness (as is that quality mentioned above). “When You Got It, Flaunt It,” Ulla sings, and Pentek does – in sync with musical director Jeff Unger’s spiffy twelve-piece orchestra.

As easy as most of the show is on the eyes, the ears are not so fortunate. The sound system is set on maximum gain (or so it seems), and the excessive loudness – hollering, in fact – by some of the actors renders some scenes virtually unintelligible. The less-boisterous scenes and numbers (“We Can Do It” and “That Face” are two) stand out as exceptions. It’s a simple enough flaw to rectify on both ends. There are, after all, three more performances.

As oft stated, parody dwells in extremes, and “The Producers” does not hold back. The Axelrod production could well be the one the New Yorker cover audience is seeing. Hitler would indeed be pissed while everyone else is laughing. Good for producers Jess Levy and Andrew De Prisco for bringing the irreverent, but somehow important show to this house.
Performances Fri and Sat Nov 20 & 21 at 8PM; Sun Nov 22 at 3PM and Axelrod PAC, 100 Grant Ave, Deal, NJ. For tickets ($20-$32): 732-531-9106 or online at www.axelrodartscenter.com

Trivia: The day after “The Producers” opened, the top ticket price was raised from $90 to $100. That was then, right?