No one was more skeptical than I when Two River Theater announced an all-male “A Funny Thing Happened On the Way to the Forum,” a musical comedy shot through with gags, innuendo and bodily display, all to do with women. And now, having seen the production, no one is more won over.

It’s not a gimmick; it’s an interpretation. The 1962 musical is culled from the 21 surviving comedies of Titus Maccius Plautus, the Neil Simon of BCE Rome. The original story by Burt Shevelove and Larry Gelbart incorporates Plautus characters: a conniving slave, a callow hero (named Hero), a lustful husband and his shrewish wife, an innocent maiden and a gaggle of seductive courtesans, all of whom would have been played by men back when. And so it is at Two River. Does it work? For sure. And then some. 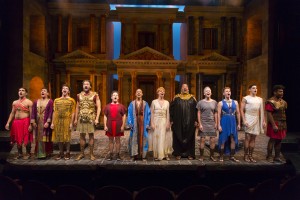 Roman slave Pseudolus (Christopher Fitzgerald) can earn his freedom by procuring (sorry) for his master Hero (fine tenor Bobby Conte Thornton) the virginal Philia (Hero’s one too), who has been sold from the infamous house of Marcus Lycus (David Josefsberg, appropriately oily) to macho warrior Miles Gloriosus (imposing baritone Graham Rowat), who is on his way to claim her. Each of Lycus’s courtesans performs a seductive dance, and two minutes in you forget they are not females, these physically-adept comical actors whose sex could not matter less. (Denis Jones’s inventive choreography, which toggles between dance and gymnastics, is the show’s secret weapon. It looks slapdash in spots, but that’s intentional…and part of the fun.) More of the plot will not be revealed here, less to protect spoilers than to spare me the effort to unravel it.

It is the most physical “Forum” of the many I’ve experienced (including having played Pseudolus years ago). From the start, with a sketch of the set evolving on the show curtain in sync with the overture (musical director Gary Adler’s terrific eight-piece pit band), movement rules the day.

Fitzgerald is a veritable perpetual motion machine. Loose-limbed as a puppet on a string and possessed of pin-point comic timing, he semi-narrates the story even as he acts in it. His energy is contagious and contrasts nicely with co-slave Hysterium (Michael Urie), whose faux-relaxed demeanor is debunked in his song “I’m Calm”. (Urie affects an obsequious posture that is uniquely amusing.) 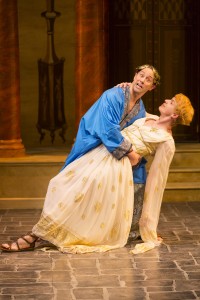 One gender-bent role stands out. As Philia, the quintessential clichéd vacant blonde, David Turner is a revelation. Philia’s deficiencies are played for laughs, but not ridiculed. Turner is phenomenal, down to the subtle glints he shares with the audience to confirm that we’re in on the gag together.

Then there’s the score. Stephen Sondheim’s earliest work is the ideal marriage of words and music. The songs are comical (“A Comedy Tonight”), lovely (“I’m Lovely”) strident (“Bring Me My Bride”) and every other style you can name. The solo/duet/trio/quartet “Everybody Ought to Have a Maid,” done here so well, is a legendary musical-comedy masterpiece. (Over-stated? Nope; not at all.) 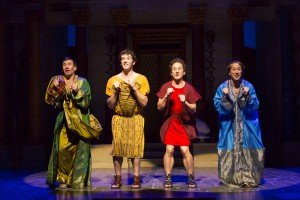 From left, David Josefsberg, Michael Urie, Christopher Fitzgerald, Kevin Isola: “Everybody Ought to Have a Maid”

Trusting of both the material and her cast, director Jessica Stone, whose all-male idea was in part to send-up female stereotypes, has achieved a perfect balance between loosey-goosey and discipline. The concept puts a new spin on a modern classic. Her gamble might have been a longshot, but it paid off in every particular.

Two River Theater’s rollicking “…Forum” is Laugh-Out-Loud-Funny. If you miss it, don’t be surprised to find a lump of coal in your Christmas stocking. You’ve been warned.